Alistair Hunter wrote to you last week about Magee and Krnic, the Farmer Norton and English Electric men here and I am writing now to confirm that both have settled down well. I think that the initial shock of the difficulty of working conditions in China upset them both and also made their contrasting personalities jar more with each other than would be normal. Not only does Krnic appear to have worked out some sort of satisfactory relationship with the Chinese but he and Magee also seem at least to tolerate each other quite happily. They came to my flat for drinks last night and they came on Saturday night to see the welfare film which we had been sent from London. We are making arrangements for them to come to all of our film shows and I am sure that they will make a few friends among the members of the staff.
2. What has slightly astonished me is the truly fantastic degree of loving care which the Chinese are smothering them with. On Saturdays and Sundays they are taken to the Ming Tombs, the Great Wall, to restaurants, to revolutionary operas and ballet and indeed they would almost wish to be left alone a little more.
3. Krnic finds of course that his large heard is invaluable in a conversation with the Chinese. One of his Chinese colleagues told him that he ought to shave it off "Because Chinese girls do not like men with "beards". Krnic replied that this was not the case in England. Such a lighthearted exchange would have been unthinkable a few months ago. You can therefore, I think, reassure Farmer Norton and English Electric if necessary that their men seem to be doing well. That is not to say that there may not be trouble before they leave but we shall certainly do our best to keep an eye on them and help them if they run into difficulties.
4. In your letter of 9 November (CRE 12341/G) about these two men you also told me about the first meeting of the new S.B.T.C. Club. I would like to add my own agreement to the views of that meeting and I think it most important that the S.B.T.C. and indeed our own Office here in Peking should keep out of the way of the Chinese for a while until the Chinese indeed possibly come and seek our help. It is obvious that for a while the S.B.T.C., Jardines and the Commercial Section of the British Office here are going to be left in Coventry by the Chinese and we must just accept this. I am sure that trade will continue but inevitably the Chinese will channel as much of this trade through Roland Berger and his associates as possible.
5. Alistair and I are starting to see more of our commercial colleagues and we hope to be able to give you some hints as to what is going on in Chinese foreign trade. Wherever possible we will ask you or Ken Rogora to pass notes from these letters to Norman Webb at the S.B.T.C., not necessarily for publication in their bulletin but to provide you and them with some talking points for the club meetings.
6. Thank you for your kind good wishes. We are managing here although I myself very much hope to have exit visas in the next couple of weeks. Alistair Hunter will stay on until March and will look after our commercial interests very well.
I am sending a copy of this letter to John Denson at the Foreign Office.
(T. Peters)
Counsellor (Commercial)
Dr. I.S. Russell,
Commercial Relations and Exports Department,
BOARD OF TRADE. 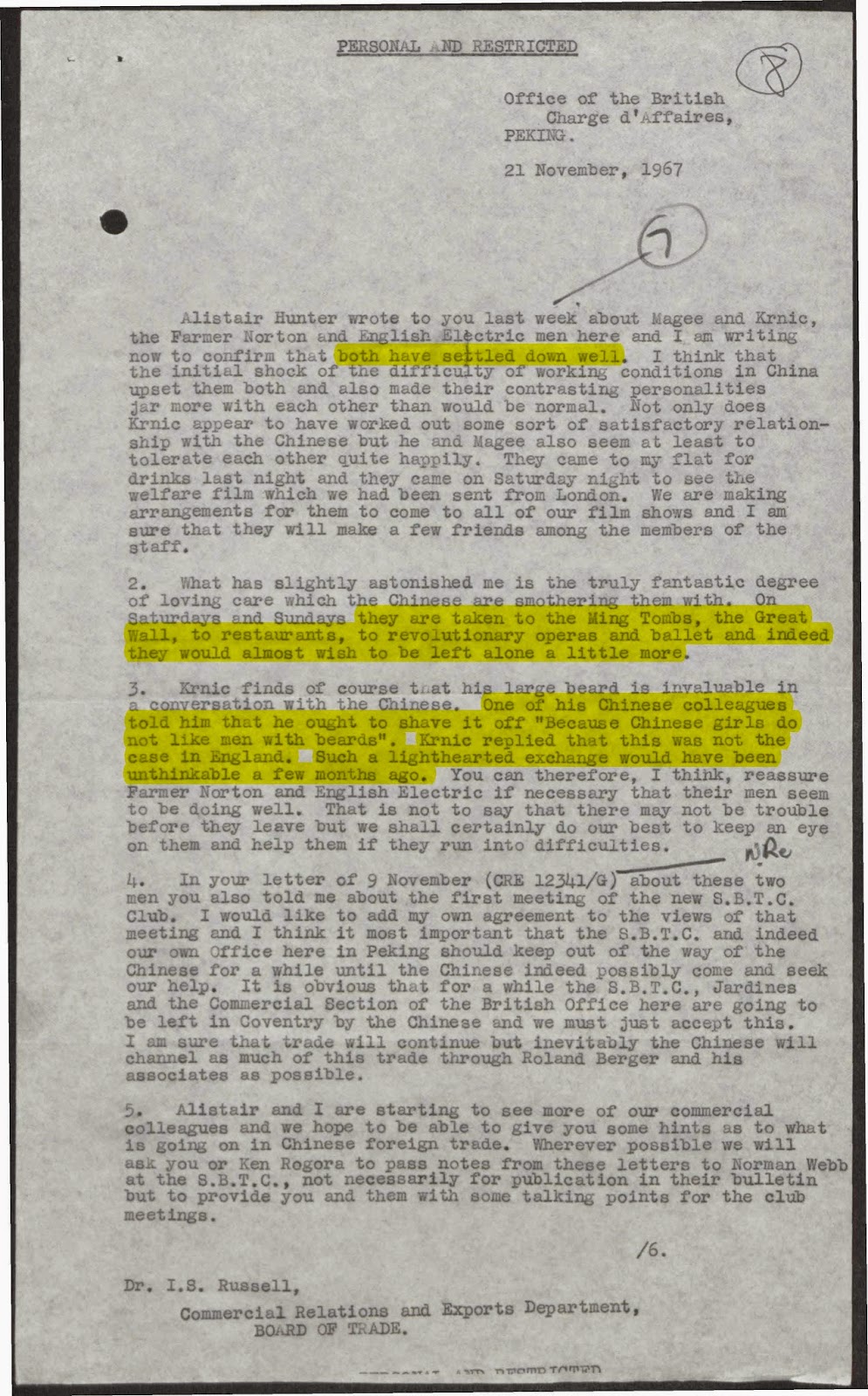 ～～～～～～～～～～～～～～～～～～～～～～～～～～～～～～
Office of the British
Charge d'affaires,
PEKING.
14 November, 1967
Theo Peters has just shown me your letter CRE 12341/G of 9 November, which arrived this morning about the Farmer Norton engineers.
2. As there is a bag leaving this morning I am writing in haste to tell you that I saw Magee and Krnic again a few days ago and that Krnic's condition was reassuring. He seems to have pulled himself together and to be prepared now to laugh at the Chinese instead of being got down by them. He still, by his own admission, loses his temper with them rather more than is advisable, and there remains the difficulty that he and Magee, who are naturally thrown very much together, are totally different types and appear to get a bit on each others nerves. But I do not think there is any immediate danger of Krnic's breaking down or demanding immediate repatriation, and indeed the chances are that he will stay the course.
I am copying this letter to John Denson in the Foreign Office.
(A. J. hunter)
First Secretary (Commercial)
Dr. I.S. Russell,
Commercial Relations and Exports Department,
BOARD OF TRADE. 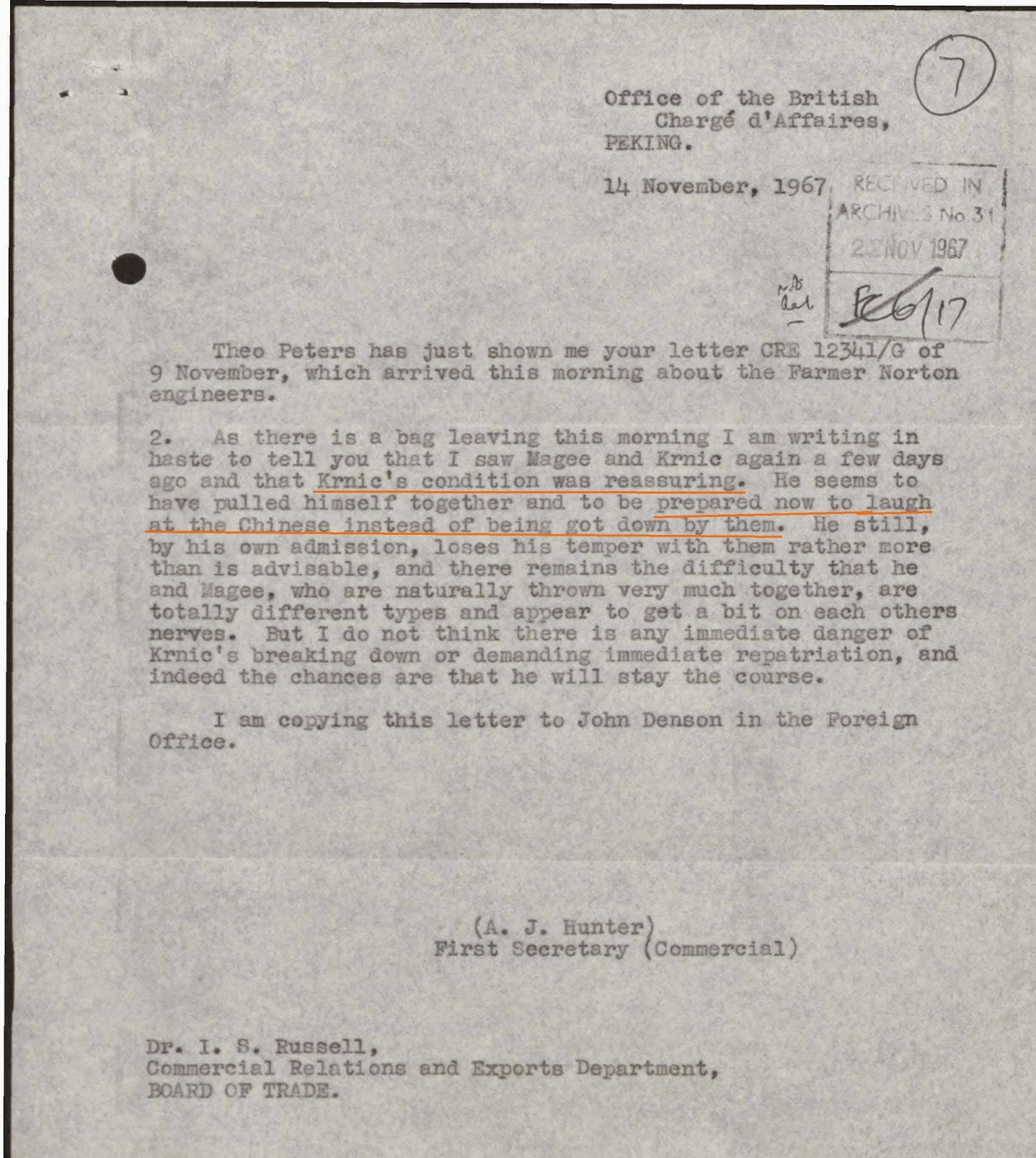 ～～～～～～～～～～～～～～～～～～～～～～～～～～～～
RESTRICTED
Office of the British
Charge d'affaires,
PEKING.
3 November, 1967
Thank you for your this week's round-up letter, which was as valuable as usual. We were particularly interested in your progress report on Canton Fair invitations for British firms.

2. Prinex. Newton of Vickers confirmed to me last night on the telephone that Marwood of Prinex, whose departure from the U.K. you reported in your letter, had arrived in Lanchow. This was the first we had heard of his coming here except for a passing reference by the Prinex men who arrived in September to the fact that he would be here “in a month or two". Even if new arrivals do not have time to call on us while passing through Peking, in present circumstances we ought at the very least to be informed that they are here. We also really ought to have passport details and next of kin's address. We should be grateful if you could drop a word in the ear of your Prinex contract.

3. Farmer Norton. McGee and Krnic arrived safely and came to see me yesterday. I was most unhappy about Krnic, who is not the type of person who should ever have been sent here and is already, after five days in China, in a highly nervous state. He spent the best part of an hour explaining several times over how miserable he was here: how there was nothing to do, no-one to talk to and he didn't like the beer: how the Chinese had done none of the preparatory work on the mill that they had claimed to have done, and how he continually lost his temper when faced with the impossible task of getting his meaning across to the Chinese through an incompetent interpreter. He asked me whether his exit visa was valid for immediate use and would be honoured by the Chinese if he insisted on leaving next week (I said I really did not know, though I could have added that the chances of the Chinese letting him go before he has completed the bulk of his assignment, or at least before a replacement has been found, are negligible). McGee seemed pleasant and competent enough, but is clearly finding Krnic’s company wearing. We shell do our best to add a bit of variety to their social life, but I fear we shall be lucky if Krnic has caused us no headaches by the time he leaves.

(A. J. Hunter)
A. K. Rogora, Esq.,
Commercial Relations and Exports Department,
BOARD OF TRADE. 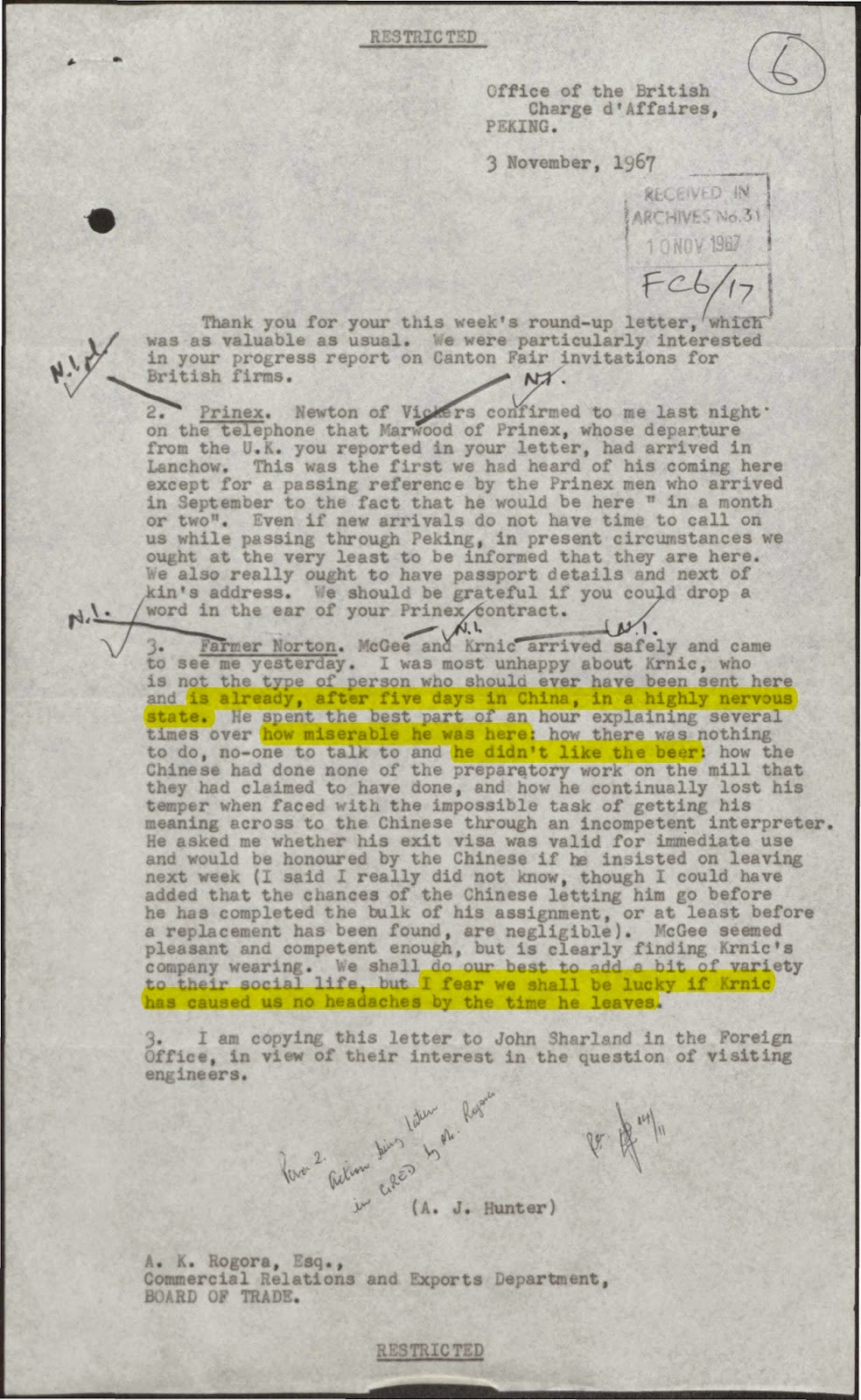