CONFIDENTIAL
FROM PEKING TO FOREIGN OFFICE

The celebrations, in particular the parade of 1 October, differed in many respects from those of previous years. On the international front, there was a striking absence of any foreign delegations of note. Friendly Communist countries were represented by low level technical delegations, some already here for other reasons: Albania (petroleum, harbour and cultural delegations): Viet Nam (public health, scientific cooperation and economic delegations): Korea (a team of wireless operators). The Cubans sent a friendship delegation. There was no Japanese Communist Party representation. Despite the attempt, via the five speeches from foreign friends, to give the impression that Peking is a centre of a world-wide revolutionary front, the general effect was one of isolation and defiance.

2.   There was no significant new foreign policy statement and no departure from the current line on Viet Nam, though the repeated references to this last topic and the denunciation by Hill of "joint Socialist action" may indicate Chinese fear of diminishing influence in Hanoi. Despite the presence of a "heroine" from South Viet Nam the Head of the SVNLF Delegation apparently did not attend the celebrations.

3.   The speeches were also uninformative on home affairs and consisted of generalised claims of unprecedented prosperity and vigour coupled with explanations of the cultural revolution. Assertion that national defence is unprecedentedly strong was given point by publicity in Peoples Daily of 1 October for Chinese nuclear tests.

4.   Strictly the rally belonged to the series of cultural revolution rallies of 18 and 31 August and 15 September. There was the same preoccupation with the internal struggle: emphasis on the revolutionary masses and on direct contact between Mao and the masses. Lin Piao spoke of the cultural revolution as far from complete: there was no attempt to refer to it in the past tense or to present any synthesis.

The most important National Day statement, the Peoples Daily editorial of 1 October, again concentrated on the cultural revolution, spoke of it as "meeting desperate opposition from the class enemy and resistance from various quarters" and also contained a stern warning to those who gave only half-hearted devotion to the "revolutionary line of the proletariat represented by Mao". It is uncertain just where these centres of continuing resistance lie, but the editorial makes it clear that the leadership feel they cannot relax pressure in the internal political situation.

5.   Perhaps the most striking aspect of the celebrations was the adulation of Mao, indicating that the leadership are embarked on an immense and almost desperate attempt to achieve unified thinking by a full exploitation of the Mao cult. Mao himself appeared strong, though obviously old, and stood for a long time in the hot sun on the reviewing stand. He seemed however, rather lost and confused in his brief sorties into the crowd to meet the masses. As before, Lin Piao was clearly next in prominence. Excellent health of both was repeatedly emphasised.

6.   No announcements were made of the posts held by the leaders. The listing follows that of 18 August with the insertion after Mao and Lin Piao of three names: Liu Shao-ch'i, Soong Ch'ing-Ling and Tung Pi-wu. This should probably be interpreted as an acknowledgement of their Government positions as President and Vice-Presidents rather than an indication of any return to positions of real power.
Soong's appearance and the continued use of Sun Yat-Sen's portrait may suggest that the facade of class alliance including the bourgeoisie is to be maintained. 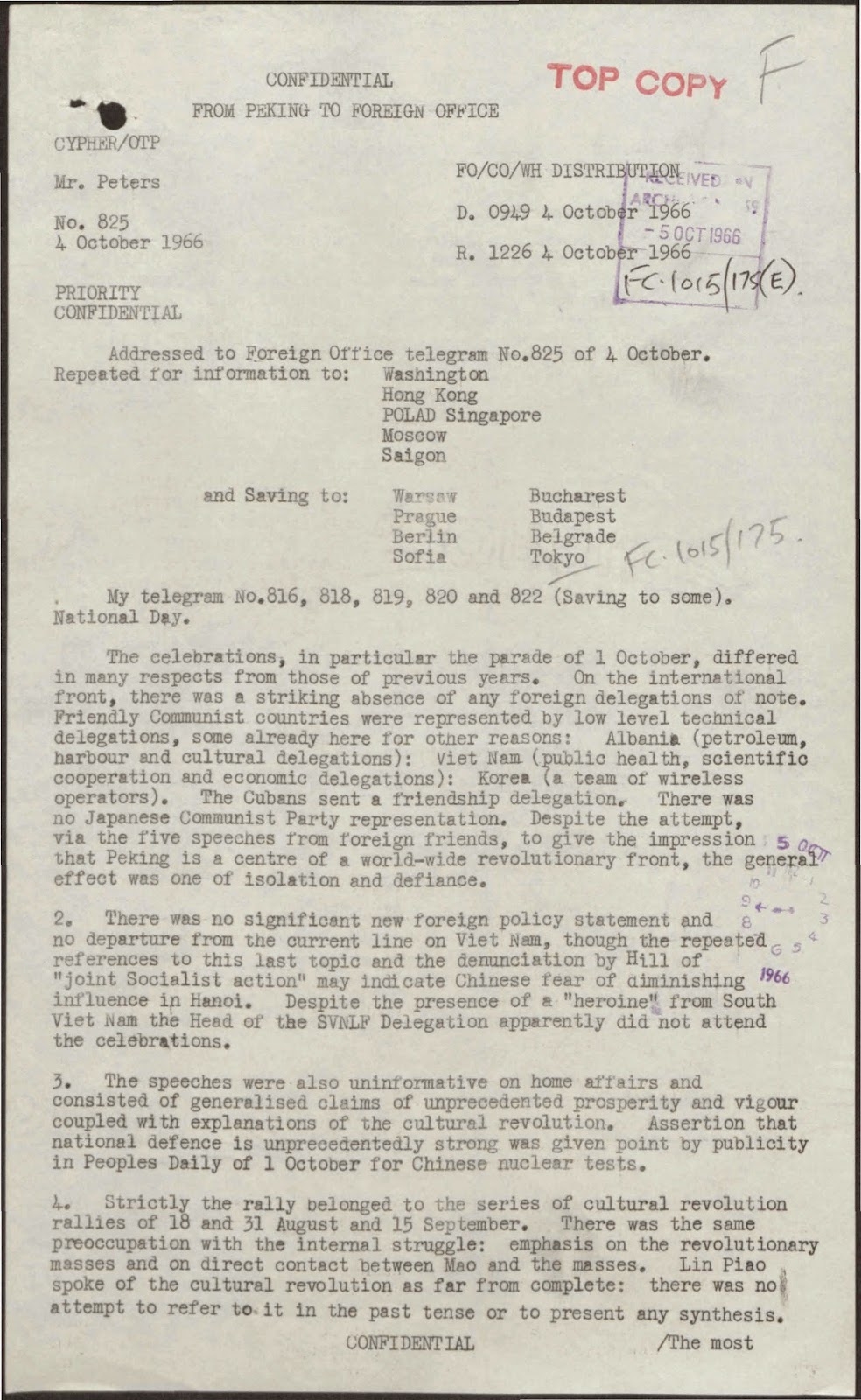 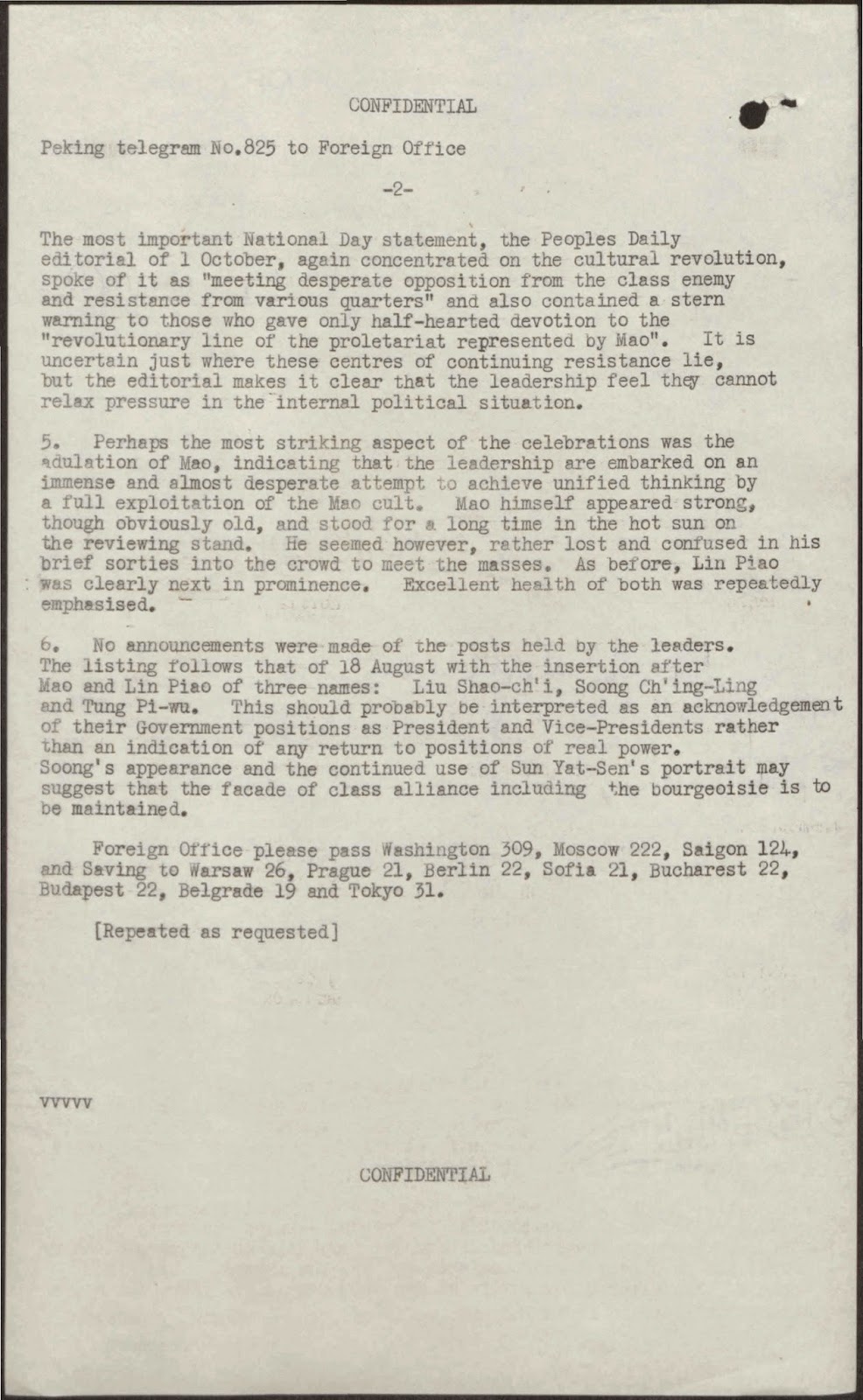