Dear Davidson,
In view of the ferment now going on in China, I imagine that any snippets of news about Chinese attitudes may be of interest to someone. It is therefore perhaps worth recording my conversation yesterday in the Chinese Embassy, where I attended their National Day celebrations. The Ambassador (who cannot trust himself to speak English), his wife and interpreter received us at the door and as there was a pause in the arrival of guests I took the opportunity to ask him what was now going on in China and what was the significance of the activities of the Red Guards. With a broad smile he replied that everything was normal and the stories I had heard were British and American propaganda. I said that this was not so; and that the world's press was fully aware of the extraordinary behaviour of these Red Guards. What was the explanation of their destructiveness, e.g. to churches and graveyards and the general rampage which they were conducting? It was very reminiscent of the "jeunesse congolaise" of Lumumba's time when bands of young thugs regarded themselves free to do what they liked. We did not expect to hear of this coming out of China. He answered that this was all part of the counter revolution. (The revolution against whom, I enquired?) Against the bourgeoisie. I said that the bourgeoisie had already been eliminated years ago, to which he said that the class had been abolished but that individuals remained. At this point other guests started arriving and I had to move on into the body of the party where I got hold of a Counsellor in the Embassy, to continue the discussion. He in turn did not know English very well and called up another young Chinese who spoke excellent English.

2. Our conversation went as follows:-
"What were the Red Guards engaged in doing?"
"They were carrying out the purposes of the counter revolution."
"Why had all foreign students been expelled from the universities in China and sent back home? Was the University of Peking closed?"
"No. The University was not closed but the staff had no time to teach foreign students because they were carrying out the counter revolution and taking part in demonstrations. "
"If the University was not closed, were classes still being held for Chinese students?”
"No. The West might say that the University was closed, but in fact it was carrying on.
"Were the staff and students now engaged part time in teaching work, part time working on the land and part time working in factories?"

This produced three or four exchanges of Chinese between the Counsellor and the interpreter and finally the reply:

"This is a rude question which is not expected from a friend."
"It is not at all a rude question, but a genuine enquiry. I have read that this is indeed the objective of the present counter revolution; namely that those engaged in teaching should also do part time factory work and part time agricultural work. Is this true or is it not?"

This again produced several exchanges of view in Chinese following which the answer was given:
"Yes it is true."
"Was it not hard on, say, the African student who was within one year of getting an engineering qualification that he should be sent back home without it?"
"He could return when this was all over."
"Why were the Red Guards behaving in this uncivilised way, which one had seen in parts of Africa but did not expect from an old and cultured nation like the Chinese?"

Again this produced a to-ing and fro-ing in Chinese and the answer:
"We are grateful for your kind remarks about the Chinese people."

3.   As I wanted to look in on a farewell party which the German Ambassador was giving before his departure, I left. At the German party I met the Russian Ambassador who said that he had also been at the Chinese reception. I asked him whether he had discussed the present state of affairs with the Chinese ambassador; he replied that he had and that the Chinese Ambassador had said to him that "you should know what this is about; you went through this yourselves". The Russian said that he had only asked one question. '"Where have all the pictures gone?" which used to adorn the Chinese Embassy. The Chinese had given him no answer to this one. There were in fact only two pictures of Mao and texts of his writings hanging on the walls. I said to the Russian, "But it was not of course so long ago since Russian embassies exhibited similar changes as occasion arose", and that if he would permit me to say so, it looked as if China was going through a severe Stalinist phase. With a broad smile he said that perhaps that was so. The Russian went on to say that before Vietnam, Russia had been getting very close to America but that had all now been spoiled. I replied that I felt sure these close relations would be re-established once Vietnam was out of the way and that in my view, just possibly there would be one good result of the present troubles in China - namely that China would have to become so preoccupied with its own internal affairs that it would find itself unable to continue giving the massive support to North Vietnam which it had hitherto been doing. In that case, "North Vietnam would be forced to come to terms with the Americans. The next six months would show if this was so; and if it was so I hoped that Russia would do everything in its power to assist the process. The Russian Ambassador replied that this might happen but things were very difficult indeed for Russia over Vietnam.

4. I am sending copies of this letter to Peking, Moscow and Washington.

Yours ever
Ian Scott
(I. D. Scott) 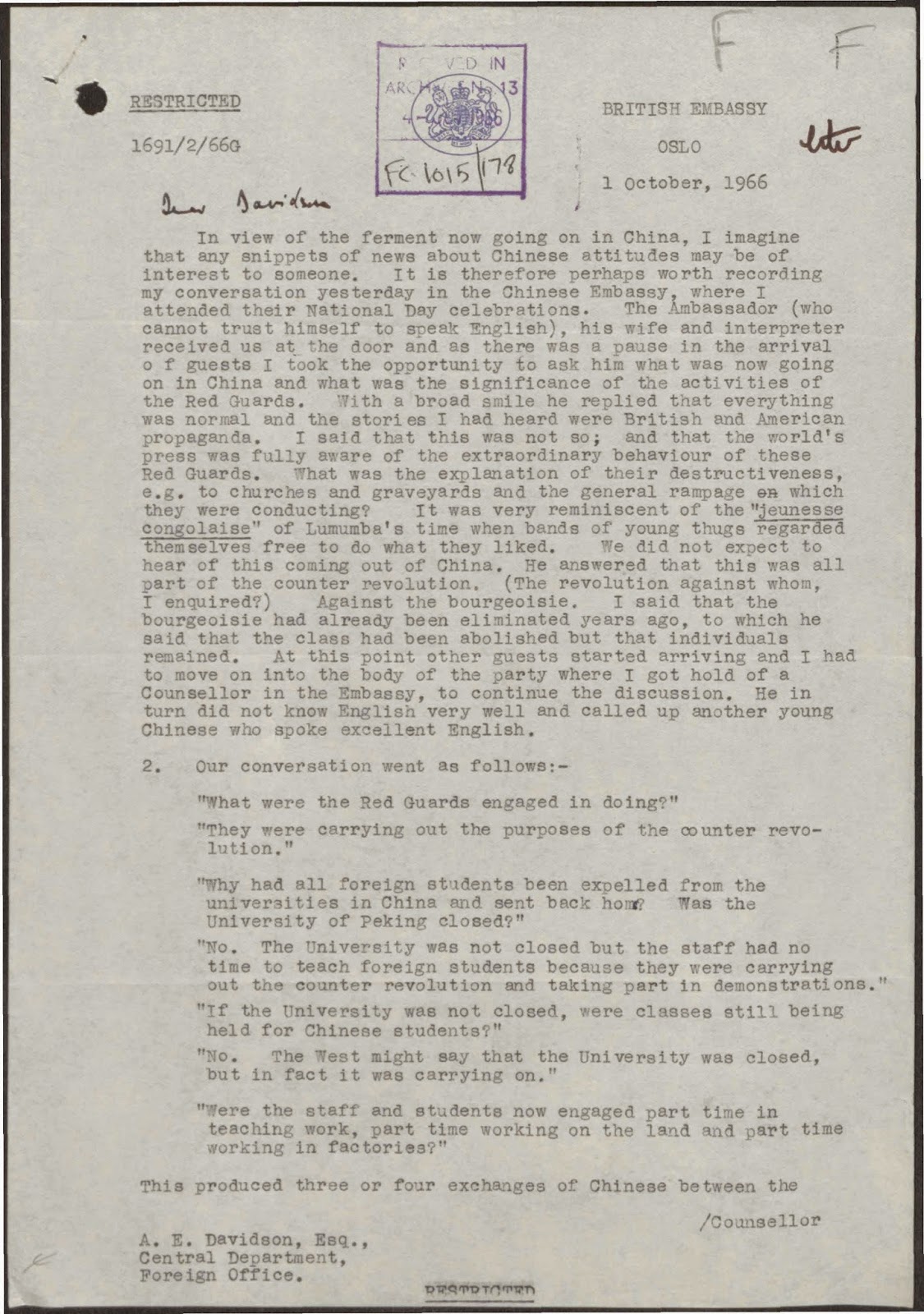 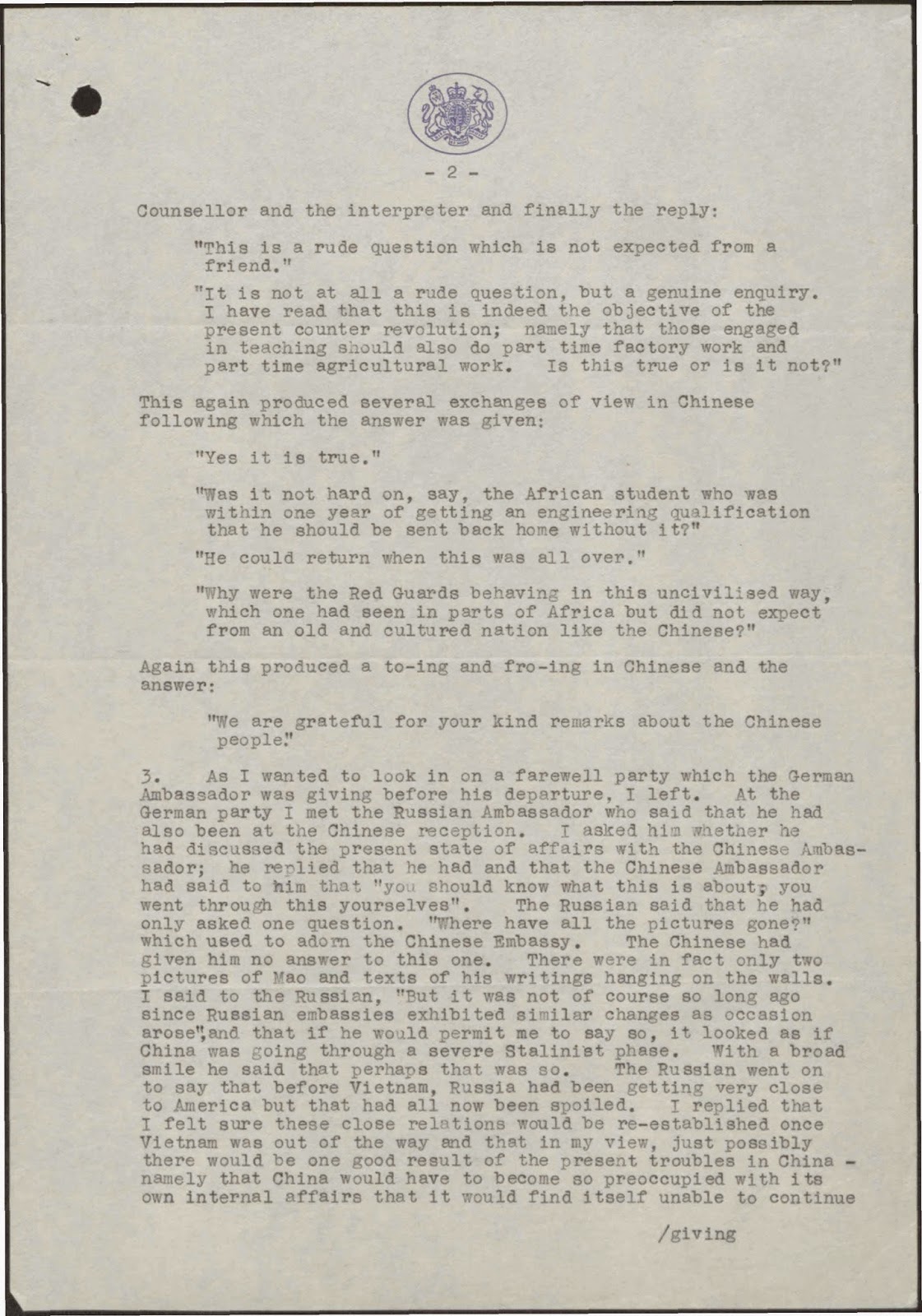