Addressed to Foreign Office telegram No.879 of 22 October.
Repeated for information to: Washington
POLAD Singapore
Hong Kong
and Saving to: Moscow
My telegram No.859: Cultural revolution.

Political temperature remains high and there is evidence of continuing, but still obscure, party struggle. Posters are plentiful in Peking and Red Guards continue to come and go.

2. The major event was the rally of 18 October (my telegrams 869 and 874). Absence of speeches at this rally may mean that the leaders are content for the movement to follow its present course, since they did not, as on previous such occasions take the opportunity further to incite or to restrain the students. Rally seems to have been used simply as a means of strengthening still further direct personal loyalties of masses to Mao and Lin Piao's position as No. 2. It may have been arranged merely in response to demands from Red Guards visiting the capital to see Mao, which have been reflected in some quite strongly worded posters. On the other hand the form of the rally was unusual and there were signs of improvisation and disorganisation. It may have been originally planned to follow traditional pattern and perhaps to coincide with an announcement of some substance.

3. Li Hsueh-Feng appeared in the same position in the list as on 18 August. Nevertheless a large proportion of the many new posters which continue to appear in Peking are still devoted to detailed attacks on Li and demands for his dismissal. He is denounced for following a bourgeois anti-Mao line and attempting to suppress the revolution. Some posters say that Li is only able to persist in this line because he is supported by the "black roots" behind the scenes. These and other similar innuendoes appear to be aimed at Liu Shao-Ch'i ,. though other party bosses e.g.
Teng Hsiao P'ing may also be under threat.

4. One explanation of the present unresolved situation may be that the dominant extremists (Mao and Lin Piao) have so far not achieved sufficient internal Party support, or perhaps not made sufficient public preparation, to carry the purge to a further stage: and that Liu Shao-Ch'I, who may be intended as the principal ultimate victim, and much of the party machine, are still fighting a strong rear-guard action. This or some similar high-level struggle may account for the continuing uncertainties about Li Hsueh-Feng’s future and perhaps the incomplete nature of the rally. But this at present is little more than speculation.

5. One certain fact is that Lin Piao continues to entrench himself in his position as second only to Mao. Indeed one People's Daily headline on the rally read as follows: "comrade Lin Piao and other responsible comrades of the Central Committee together with the great leader reviewed the great army of the cultural revolution". We do not know what if any significance to attach to this.

6. Other posters continue to attack provincial Party Committees. Hunan, Kiangsi and Kweichow are now also specified. A feature of current phase is daily meetings in Peking Stadia by groups of students from different provinces to denounce their own provincial leadership. Behaviour of students is otherwise characterised by placidity and drift.

7. Screens in front of Party headquarters now prevent foreigners reading posters there. In front of foreign Ministry Ch'en Yi is named in small poster as ultimately responsible for misdeeds of Vice-Foreign Minister, Liu Hsin-Ch'Uan. Latter is Head of Political Bureau in Ministry and was denounced at rally on 20 October. 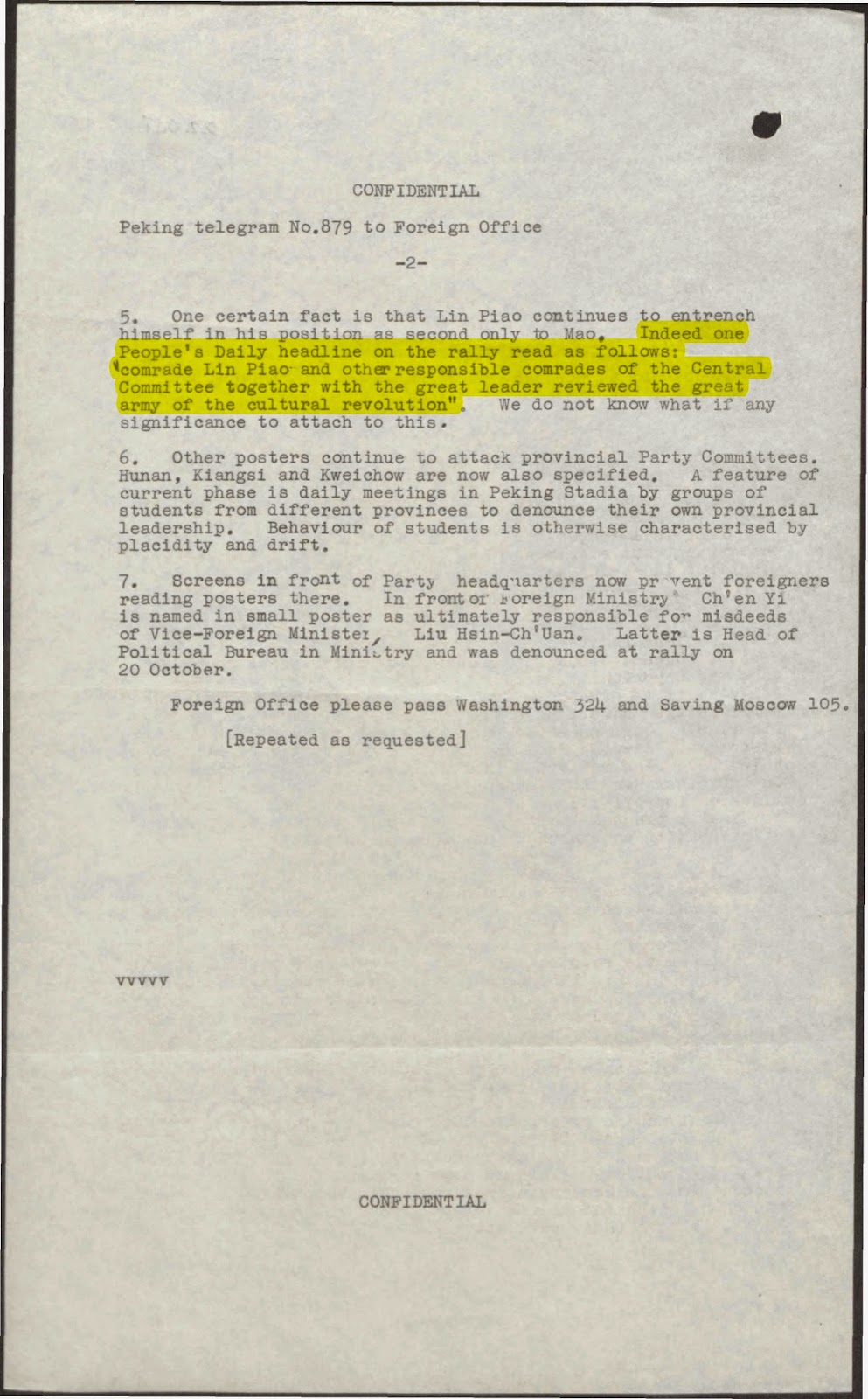