Mr. Jacobovits of the Dutch Embassy called on 25 September with a further debriefing report of the Dutch seamen who have recently been released by the Chinese. In this case the seaman interviewed was Algra, who was arrested on 2 January this year. He was at first held for about a week in a tiny cell (1 1/2 metres x 2 metres) on the third floor of the Shanghai Prison. He was alone in his cell, which had no furniture. After about a week he was moved to a larger cell already occupied by three Chinese on the ground floor of the prison. Here there were bunks and prisoners were allowed ten minutes exercise per week in the small prison yard.  Food was very poor but extras could be bought by Algra from the prison canteen with money from a fund left by his ship's master for this purpose.  The Chinese prisoners were similarly aided by relatives. For five and a half months from the time of his arrest Algra was taken to an interrogation room for "investigations of his case". These all began with enforced bowing to a Mao portrait followed by study of Mao thought. The interrogations took place at irregular intervals and lasted varying lengths of time. Algra throughout maintained that he was drunk when he had shot at the bust of Mao on his ship but when after five and a half months he admitted that he had destroyed the bust because he disliked China the interrogations stopped and were never repeated. For a short time Algra was sent to a labour camp but no work at all was done in Shanghai Prison (apart from study of Mao thought). In spite of the extras from the prison canteen, Algra suffered from vitamin deficiency which after six and a half months became scurvy. The Chinese treated him for this and thereafter improved his conditions.

2.   Algra reported that in the cell across the courtyard opposite his own he had seen a European whom he described as short and stocky, who wore a dark blue uniform in winter and white shirt, shorts and socks in summer. He had no chance of making contact with him, however, Algra estimated from the special food that was brought round on the trolley that there were several other Europeans in the jail which otherwise held a thousand prisoners. Algra saw no other Europeans other than the one mentioned and indeed did not know of the presence of his colleague Revier in the same prison until they found themselves on the same train together bound for Canton.  (On this train they were provided with excellent food including large quantities of fruit and eggs.)

3.   I have informed Mr. Thomas of MacGregor, Gow and Holland in confidence of Algra's report of the other European he saw.  It seems likely that this was Crouch.
(R. N. Dales)
Far Eastern Department
1 October, 1969

2.  The Dutch Embassy here have been very helpful in passing on reports or the experience of the two seamen from the MFA in The Hague. I enclose a copy of a minute I wrote recording my latest conversation with Mr. Jacobovits of the Dutch Embassy, who passed on some very interesting details about the conditions the seamen had had to suffer in Shanghai Gaol. The other Dutchman, Revier, has also been interviewed.  He was kept in solitary confinement for almost two and a half months in a small cell but was then moved to a larger one shared with two Chinese (with whom he shared no common language).

3. The reports of both having seen from a distance another European are inconclusive. Revier described the man he saw as aged around forty, dressed in tropical "whites" and a slim but short- legged 1m. 60c. tall. The common feature of this description with that given by Algra is the tropical white uniform. It would seem likely from the fact that he also wore a blue uniform in winter that this man is a seaman. However, Tan Thomas of McGregor, Gow assures me that none of the rest of the description fits Crouch, who is over six feet tall.  Allowance could I suppose be made for the fact that Revier was looking down from his first floor cell on the man he describes while Algra only saw him through a cell window opposite.

4. Tan Thomas has not learnt anything through his own channels, and, so far as we know, the photographs of Crouch, Barrymaine, and Johnson have not yet been shown to either of the two seamen.

5.  It would appear from Derksen's guarded comments to you about the treatment of the two seamen that he is not aware of the close co-operation between ourselves and the Dutch here!
(R. N. Dales)
To: J. N. Allan, Esq.,
PEKING.

Please refer to your letter of 27 August to Roger Garside about the release of the two Dutch merchant marine seamen.

2.   I today called on the Dutch Charge d'Affaires and asked him about this. He claimed that he had as yet had no reports either from the Dutch Consul-General in Hong Kong or the MFA in the Hague. He had recommended to the latter that they interview Revier but had not so far heard whether this had been followed up.

3.  Having said this, Derksen then told me that the two men had been in separate cells with Chinese and that it was only when they were moved to Canton on their way to Hong Kong that they realised they were sharing the prison. So far as he knew, they had seen no other Europeans. Apparently they had a number of interrogations in prison. Their fellow prisoners taught them current Chinese songs and Revier apparently also had sessions reading Mao's thoughts. These remarks suggest that Derksen has in fact had quite a full report of the men's time in prison;  this is strange in view of para 2 above, but I suppose he may have got it indirectly from shipping sources.

4.  Derksen congratulated himself on his diplomatic technique in dealing with the arrested men. He said that he had suggested in his notes that the difficulty arose because the Shanghai authorities were being difficult and that he knew that the MFA were doing all they could and he was grateful to them. He apparently did not press for consular access. None of this is, I think, relevant to the final decision of the Chinese to release these men, but it is revealing so far as Derksen himself is concerned. He was obviously inordinately proud of what he regarded as his subtlety and saw no disadvantage in abasing himself with the Chinese. 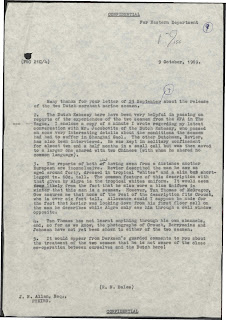 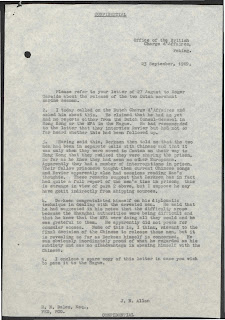 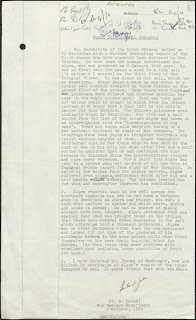 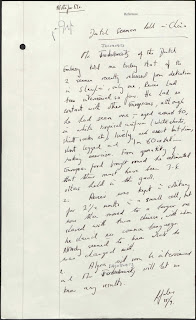