2. At 11.30 the Ministry of Foreign Affairs asked the Counsellor to come round urgently. They said that three "gangsters" had penetrated into the British compound after "injuring" the policeman on duty at the gate (this is, of course, most unlikely to be true). They asked us to persuade the people concerned to leave the compound. The Counsellor explained to them that we had been trying to do so for two hours; it was agreed that we should make one further effort at persuasion and that, if this failed, the Chinese should send police to be admitted into the compound by a member of my staff in order to remove the three students.

3. Final efforts to induce the students to leave the compound failed and with considerable difficulty (it was a Chinese half day) we contacted the Ministry of Foreign Affairs again. At about 5 o’clock six policemen escorted by a Member of Protocol Department were admitted into the compound by the Chinese secretary and removed the three students, who offered no resistance.

4. The students were almost certainly bona fide "rightists". They had clearly thought out their move with some care and quoted to us the case of Nagy and of Four Tsung as well as an alleged statement by the C.P.G. in 1950 recognizing the diplomatic immunity of Embassies. It was extremely distasteful to hand them over again to the Chinese authorities, but I cannot see that we had any choice. We were, in fact, about to contact the Ministry of Foreign Affairs ourselves when they first rang us up.

5. The students left behind with us statements which they wanted to be issued by Reuters and B.B.C. I think it possible that the two Western Press correspondents in Peking will hear something of what happened and will make enquiries of us. I would recommend that, if possible, no publicity be given to the case and that I should only give the bare facts in answer to enquiries. Only if, as I think unlikely, the Chinese publicize the case should we consider giving further details likely to discredit the Chinese Government. I would be grateful for immediate guidance on this.

We, three students of Futan University, Chinese political offenders, Rightists, today, at the risk of our lives, at the risk of "being condemned "by the Chinese Government as traitors, without any weapons or money, ran through the front gate of the British Charge d’Affaires’ compound. In 1957, during the period of the Rightist struggle which was to decide who were "probable" criminals, we were picked out as Rightists, at that time under the pressure of force and barbarism we were compelled to admit that we were Rightists. After we were recognised, we were subjected to a life of cruel forced labour. We needed permission to go more than half a mile from our place of work, our daily hours of work were normally 12 or more, to speak even the most ordinary sentence was to ask for criticism of our thoughts. We usually returned exhausted from our work, but we still had to write reports on our thoughts and to perform various other tasks. Moreover, despite the fact that the Chinese Communists and Chinese Government had said that they would use "the methods of internal contradictions among the people" to solve the Rightist problem; in fact the treatment given to landlords, rich peasants, counter-revolutionaries, bad elements and Rightists was exactly the same.
Furthermore, recently preparations have been put forward to collect us into labour prisons. The so-called "Education through Labour" is as described above and we had no choice but to flee to the British Charge d'Affaires’ office and request asylum. The power to grant asylum is that decided on in the "Decisions of the Standing Committee of the 44th Session of the Society for the Study of International Law" and this decision has been recently published in a book of ’Collected Material on International Law’ published by the Chinese People’s University. But a few hours after we had escaped into the Charge d’Affaires’ Office, the Chinese Government was preparing to enter and detain us. In doing this they are showing their fundamental contempt for international law and the right  of asylum as well as trespassing on the sacred rights of embassies.
At present it is very difficult to forecast our fates, we have heard that the Chinese Government has fabricated a rumour that we struck the policeman at the   gate and has told this to the British Charge d’Affaires. In fact, are 3 students   who have suffered the ill treatment of compulsory labour still not human beings, how would they dare strike an armed and trained ordinary policeman? We especially request lovers of justice, freedom and those who maintain human rights all over the world, to give us their utmost moral and legal support.
We urgently await (a response?)
SIGNED          Chang Ho-li
Chu Ta-fang
Chou K’eng-liu.

T0 BE SENT TO REUTERS, HONG KONG NEWS AGENCIES AND THE B.B.C

T0 BE GIVEN TO REUTERS OR HONG KONG NEWS AGENCIES OR THE B.B.C

Three Chinese Rightists - political offenders, at 10.10 a.m. Peking time today, fled into the compound of the British Charge d’Affaires, determined to demand asylum and assistance in leaving the country according to the basic international law as enunciated in "The Decisions of the 44th Session of the Standing Committee of the Society for the Study of International Law - Asylum under International Law”.
These three Rightists are members of Futan University, Shanghai:
Chang Ho-li, of the Chemistry Research Institute;
Chu Ta-feng, a student of the Department of Journalism; and
Chou K’eng-lin, a student of the Department of Biology.

They state that from 1957, when they were accused without reason of being Rightists, they have endured inhuman compulsory supervised labour, political control and discrimination. Moreover, informers among them have sent accusations to the Central Committee with the result that they have suffered very severe persecution, the accusations have been alike in that they too have been entirely without foundation.

In fleeing to the compound of the British Charge d’Affaires, they have exposed themselves to very great danger. Moreover, they have only demanded asylum after first consulting international law and the decision of the 44th Session of the Standing Committee of the Society for the study of International Law, which has been published in a recent publication of the People's University "Collected Material on International Law", But a few hours after the three offenders had entered the Charge d’Affaires’ compound, the Chinese Government still rigidly insisted they could not find asylum in the compound. Moreover, the Chinese Government slandered these three saying that "they were deranged and that because of ill treatment while doing compulsory labour are completely exhausted and had also struck the policeman at the gate.
These three students have lived safely in the compound for 3 hours but their fate when they leave will be extremely difficult to forecast; but they hope public opinion in the whole world will give them the strongest possible support.
出处：英国外交部档案FCO 371/141321 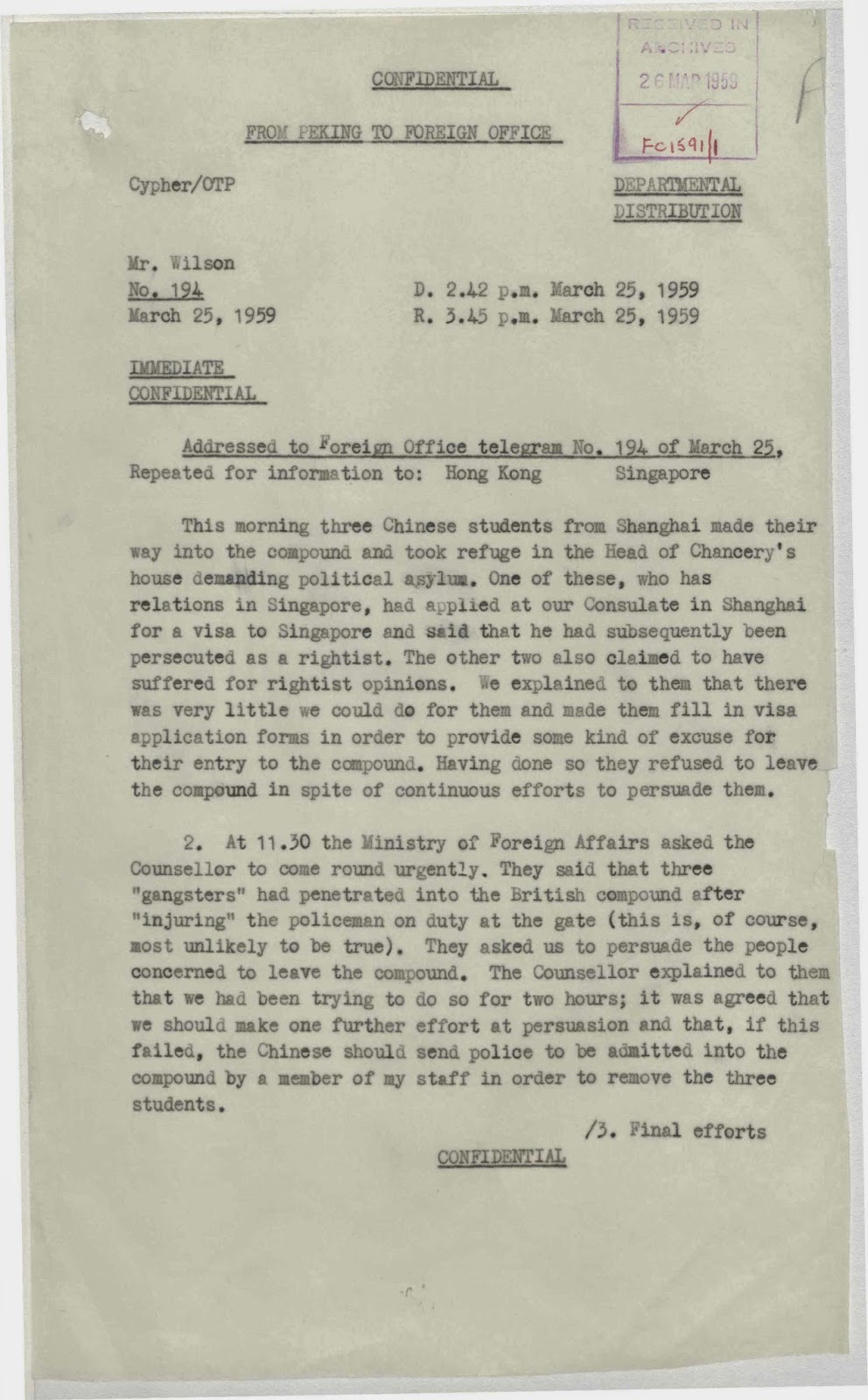 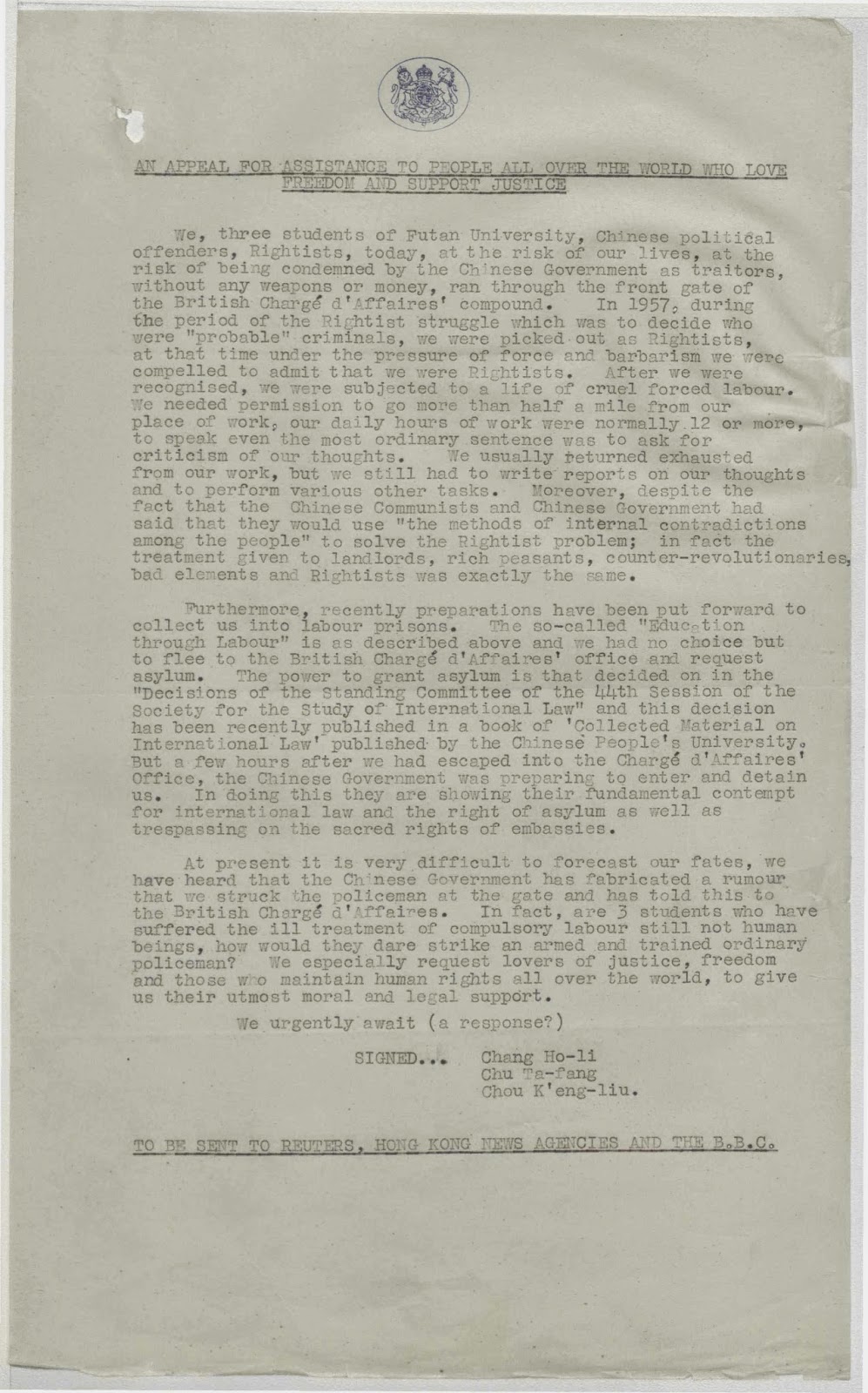 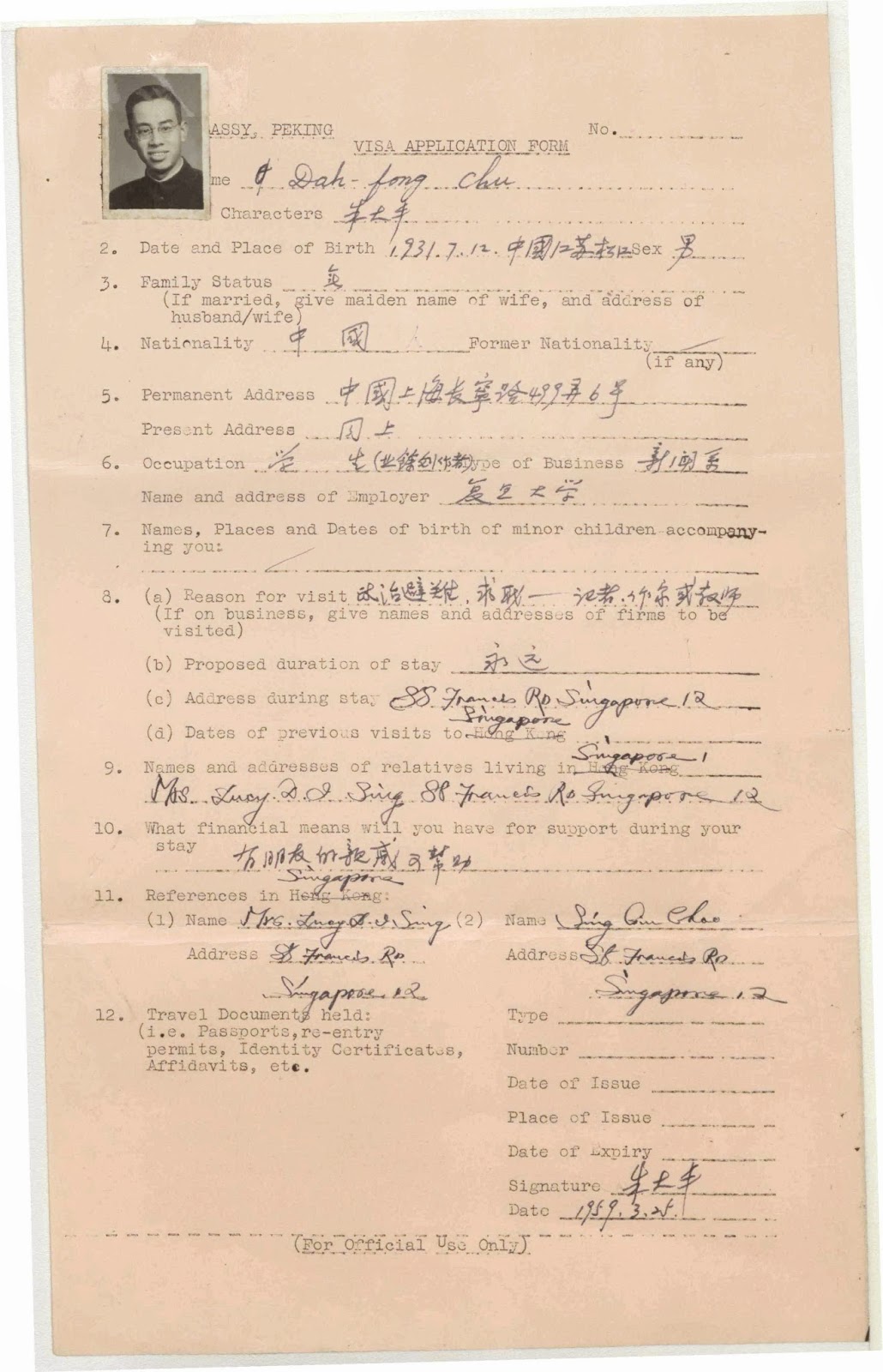