The Acting U.S. Consul-General has given me a copy of the letter which has been addressed to the Chinese Red Cross by the American Red Cross concerning Baldwin and Mrs. Donald. I enclose a copy.

2.  Jacobson explained that the letter had been sent without any consultation with the Consulate-General who had in fact earlier advised the State Department against any such action for the time being. The reason for this advice was that the Consulate- General realise there is extremely little the U.S. Government can do and as Baldwin and Mrs. Donald may be in China for a long time it is advisable to postpone as long as possible taking one of the few available actions. The Consulate-General also think that the Mr. Chien who is addressed and is supposed to be the President of the Chinese Red Cross has in fact disappeared during the Cultural Revolution.

3.  I am sending a copy of this letter to John Denson and Michael Wilford.

Three months ago the press reported a number of yachts, while sailing from Hong Kong to Macau, may have strayed into the territorial waters of your country, where they were seized and the crews and passengers held.

It is our understanding that at the present time only two of these individuals, Simeon Baldwin, Jr., and Mrs. Bessie Hope Donald, who are Americans, are still being detained. Their relatives have repeatedly asked us for information concerning their health and welfare, but regretably we have no details to share with them.

Would it be possible for you to secure some information con­cerning these two Americans, who, we understand, are being held, together with their yacht, somewhere near Macau? We would, of course, be willing to provide our friendly services in the event this would be useful in effecting the release and return of these two persons.

Any information you can share with us will be deeply appreciated by the members of their families and ourselves as well. 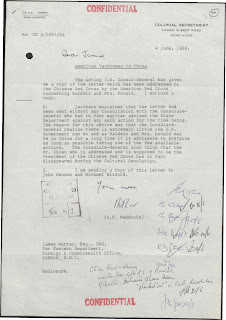 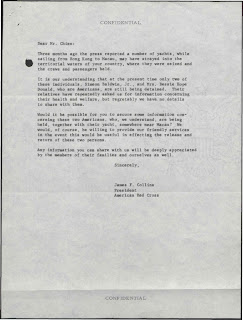