Since my letter 510/14/66 of 29 August was written, the situation in Shanghai has remained fluid.

2.   The lull in the activities of the Red Guard contingents lasted a bare couple of days. Then reports of Chairman Mao’s meeting with some 500,000 the Red Guards appeared in hastily written news bulletins on walls and on shop windows throughout the city, and a new wave of "revolutionary action” began. The destruction of the “Four Olds” continued with renewed vigour but fewer signs of the persecution of the bourgeois and capitalist elements were to be seen. Nevertheless this persecution went on. I heard of an number of cases where Chinese of these classes, especially those who had been or are still employed by foreign concerns in Shanghai, were beaten and interrogated day and night for long periods, and their possessions confiscated. As far as possible these attacks were made when foreign eyes were unable to see them, but the attention of foreign residents could not entirely be avoided since segregation is not so easily managed in Shanghai as in Beijing.

3.  The foreign residents themselves have not been molested, though some have been visited by Red Guards. Others have received anonymous calls to say that the Red Guards are on their track, but nothing has happened thereafter. Nothing can be done to trace the perpetrators of these macabre jokes. All foreign business premises are now festooned with banners and the standard portrait of the Chairman.

4.  The arrival of large numbers of Red Guards from Peking touched off another short period of violence but after a few days the natives sickened of their Peking colleagues’ extreme behavior and there were reports of several clashes between them. The northerners were accused of flagrant looting and theft and one or two of the worst offenders were pitched into the Whangpoo. They had also caused ill-feeling in Shanghai by besieging the Mayor, Tsao Ti-chiu, in his office and intimidating him. Tsao has been lying low ever since and his reappearance is unlikely in the immediate future.

5.  Among those victimized by the students from Peking were a handful of officers of the P.L.A. The charges against them were numerous: they were accused of Revisionist tendencies, arrogance in their dealings with fellow-citizens, hoarding valuables, etc. But the basic crime seems to have been that they lived in a block of flates whose other tenants are mainly foreigners. Two other Chinese tenants in the same block, who were reputed to have acquired their wealth by running a protection racket during the K.M.T. regime, committed suicide by jumping from their sixth-floor balcony after four days of interrogation.

6.  The various business concerns are trying to carry on as best they can in unfavourable circumstances. They are still in a state of uncertainty since they can never be sure whether associates and employees are available or “out of circulation”. Shops open and close again. Their stocks are much depleted and must conform to the utilitarian standards laid down for workers. None of the fine window displays, which were almost Western in comparison with the drab layouts of Peking shops, exists any longer. The windows are now all the same. Mao’s portrait occupies the central position surrounded by red buntings, quotations from his works and placards with important news items on them. Their uniform appearance tends to confuse even the Chinese customers. The restaurants that are still operating are serving cheap meals for the workers and students. The food is apparently very bad, even in those establishments which until recently had a reputation for service, efficiency and excellent meals.

7.  Recent press editorials urging the various factions to bury their differences and work in unison for the common aim are, presumably, tacit admissions that the power of the Red Guards is greater than expected and may be getting out of hand. The harrasement of Tsao Ti-chiu tends to confirm this. The ordinary citizens in Shanghai and the suburbs are showing increasing hostility to the Guards, and the authorities, recognizing the people’s need for a respite from the fear and apprehensions engendered by the purges, are beginning to cast around for means of slowing down their momentum. A move is afoot to channel energies into renewing the struggle for production in all branches of industry and agriculture. The autumn crops, reported to be of high yield are ready to be harvested, and hands are wanted to bring them in. The effort devoted to the destruction of “Four olds” will, it is hoped, be expended constructively for the common good, and at the same time the ardour of the Red Guards will be cooled to a point where proper control can be re-established.

8.   This does not necessarily mean that we will soon see an end to the Red Guard  movement in Shanghai. Their most recent role is one of disseminating properganda. They have set up platforms and loudspeakers at strategic points and the noise is indescribable. Local residents foresee an end of the movement only when the leaders are satisfied that the “fours olds” have been replaced with the new culture.

9.   I am sending copies of this letter to Davies in Hong Kong and Wilson in Far Eastern Department. 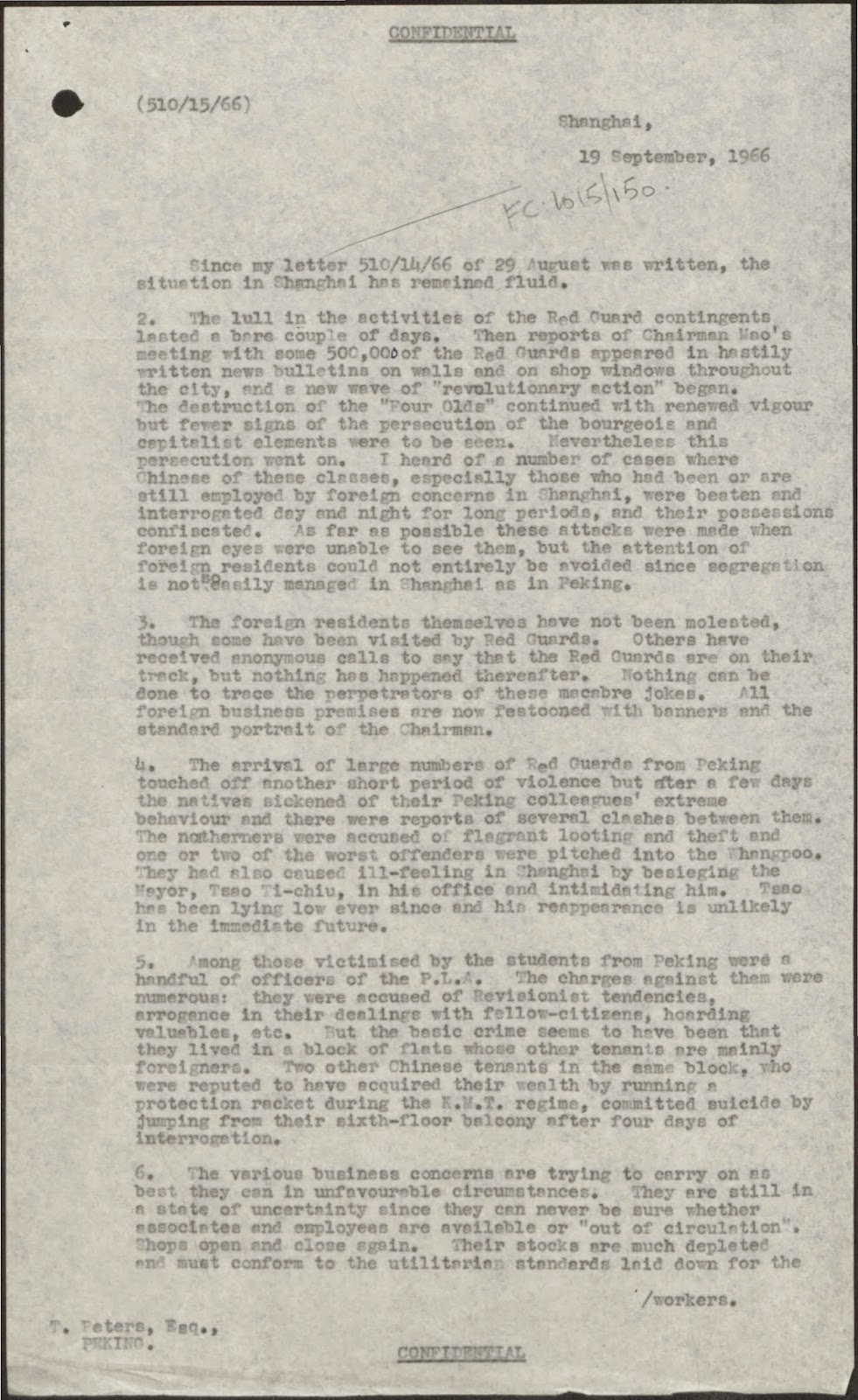 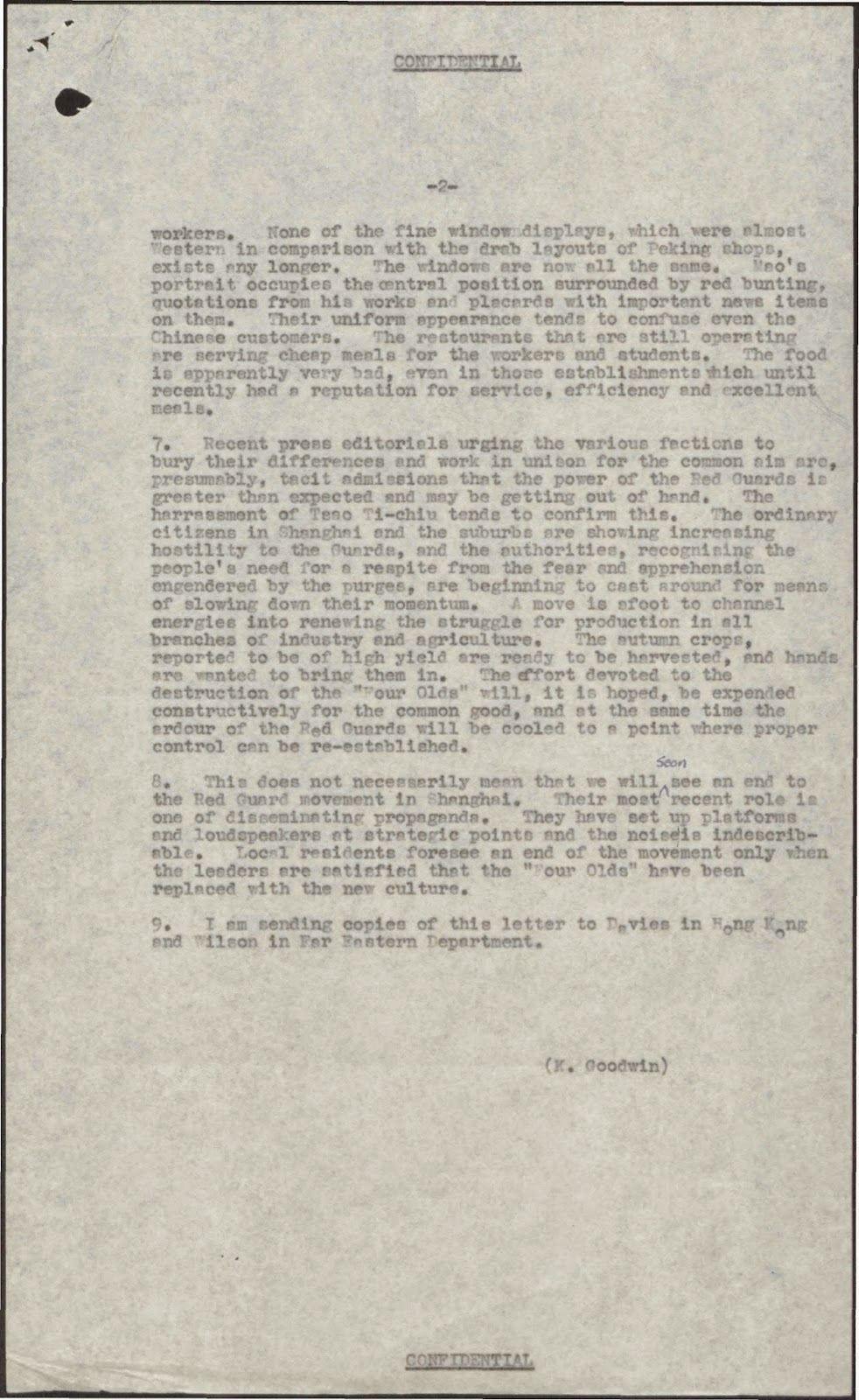