Father,
I have not written to you for some time. I now report to you the following matters:
Let me first tell you something about 6th Uncle. His present condition does not look good. He is the youngest among the six students of his school who are labeled as "monsters". According to himself and 6th.Aunt as well as the information obtained by me from his school, he does not belong to the anti-Party black gang. He is involved because of his association with bad elements in the past. However, he has shown himself well in the movement by admitting his mistake and by exposing what he has known about. It is said that the leadership would withdraw his name from the list of "monsters". Although his name may be included in "Category No.3", his problem is still considered quite serious. He has subjected himself to self - criticism. But he cannot deny that his burden is still quite heavy mentally. Because of this, his left ear has become deaf. He is now receiving treatment.

As regards 6th Aunt, her present situation is not too bad. However, she has been accused of being a royalist of bourgeoisie because of her close association with you, grandmother and 2nd Aunt. She has also been criticized for having got into the Southern Daily through your influence. She is labeled as a small land-owner. This would affect her much. She is very angry. She wants to ask for a review of her case. But before doing this, she wants to find out who had paid for her maintenance fees (including tuition, etc ) during the three years before the Liberation. If you had maintained her, then she would be considered as a member of the family of a reformed cadre. But if it was grandmother or 2nd Aunt who had supported her, then she would be looked upon as a small land-owner. At present it is rather hard for her to ask for a review, as she gets no evidence to support her argument. Please do what you can to help her to solve her problem.
I know nothing about 5th Uncle. 4th Aunt has not been disturbed by the current movement.

Now I wish to tell you something about myself. I am quite healthy now. As for my education and that of Ka Yi (0502/0348)（按：加兒）, I don't want to discuss the matter now. I am now a "Red Guard". We, Red Guards, come next ' to Chairman Mao and the Party's Central Committee. We are now in control of Stations, broadcasting stations, railway stations and various business concerns. Class struggle is now going on poignantly. Formerly I did not understand anything about the current movement in which tens of thousands of people are involved. Now I fully realize its importance. There are five categories of "Red" elements on whom we depend (they are revolutionary cadres, members of the revolutionary army, workers, poor peasants and families of revolutionary martyrs; five categories of "non-Red" elements with whom we unite ; and six categories of "Black" elements whom we attack and rule over (they are landlords, wealthy persons, reactionaries, bad characters, rightists and capitalists ) . The movement is especially tense in Peking. We feel angry at those class enemies who have killed our fellow "Red Guards". Armed with rifles with bayonet, we keep watch at the church each night. The nuns are bad, so we beat them with a strap. In the tunnel radio station, pistols , ammunition, gold "bars and revolutionary "Commercial Post" published before the Liberation were found. This is why we should struggle against them. This was the first time in my life that I saw them bleeding. As they could kill us, I see no reason why we could not treat them in the same way as they did to us. We also searched the homes of the six categories of "Black" elements. We are doing everything we can to destroy the old and establish the new. We want to destroy everything that goes with capitalism or revisionism. Now there is no room for teddy boys and flappers with queer hairdo and fanoy dress and shoes. They are not allowed to travel on public transport or to go shopping. Names of theatres, shops and s treets have been changed. We want to do away with old customs and old habits. We are termed as rioters and trouble-makers, but we don't care about that . In revolution we cannot behave as a gentleman, but should act violently. I have been deeply impressed by the current cultural revolution. I pay no attention to my private affairs. I devote my time to the current movement. The next thing we are going to do is to deal with the monsters in our school. We are now faced with the danger that the reactionaries might try to do harm to us. But we are not afraid of this . Those devoting themselves to the cause of revolution should not fear death. We are stepping up our efforts to eliminate the six categories of "Black" elements.

I have changed my name to LI Heung Yeung (2621/0686/7122). Ka Yi wishes to change his name to Li Heung Tung (2621/0686/2639) （按：李向东）or LI Hok Kwan(2621/I331/6511) (按:李学军)but he has not made up his mind yet . When you write me letters, please address them to LI Heung Yeung, which is my new name. I don't know what I should do with my sharp pointed shoes and fanoy dress. No one would like to keep these things. I can't wear them myself because I am now a Red Guard. At present some one hundred thousand Red Guards have gone down to the south for work to gain experience. On our part, we are now organizing groups to go to the north. My name has been included in the proposed groups.

I have been told by my fellow comrade Kong Ching (3068/7230) （按：江青）, that if we go to the north, we may see Chairman Mao personally, who will receive Red Guards in groups. If I can see him I would regard myself as very fortunate. If you have no objection to-my going t o the north, I would like to ask you to send me some money for my travelling expenses. But if you have no money in hand, you should also let me know. I need 64 yuan for my travellin g expenses ( i.e.38 yuan for a rounds trip by train , 16 yuan for food, 10 yuan for miscellaneous expenses, including those for public transport fares and books). As I now have 14 yuan in hand as my savings, you may send me only 50 yuan for this month. Please think the matter over for me and let me have a reply. I do not complain even if you don't like my idea of going to the north.
Heung Yeung (0686/7122)
3.9

P.S. - My school's name has been changed to "Red Flag" Middle School. Please let me have your reply as soon as possible.
档案号British Foreign Office files for China: FO-371-186982 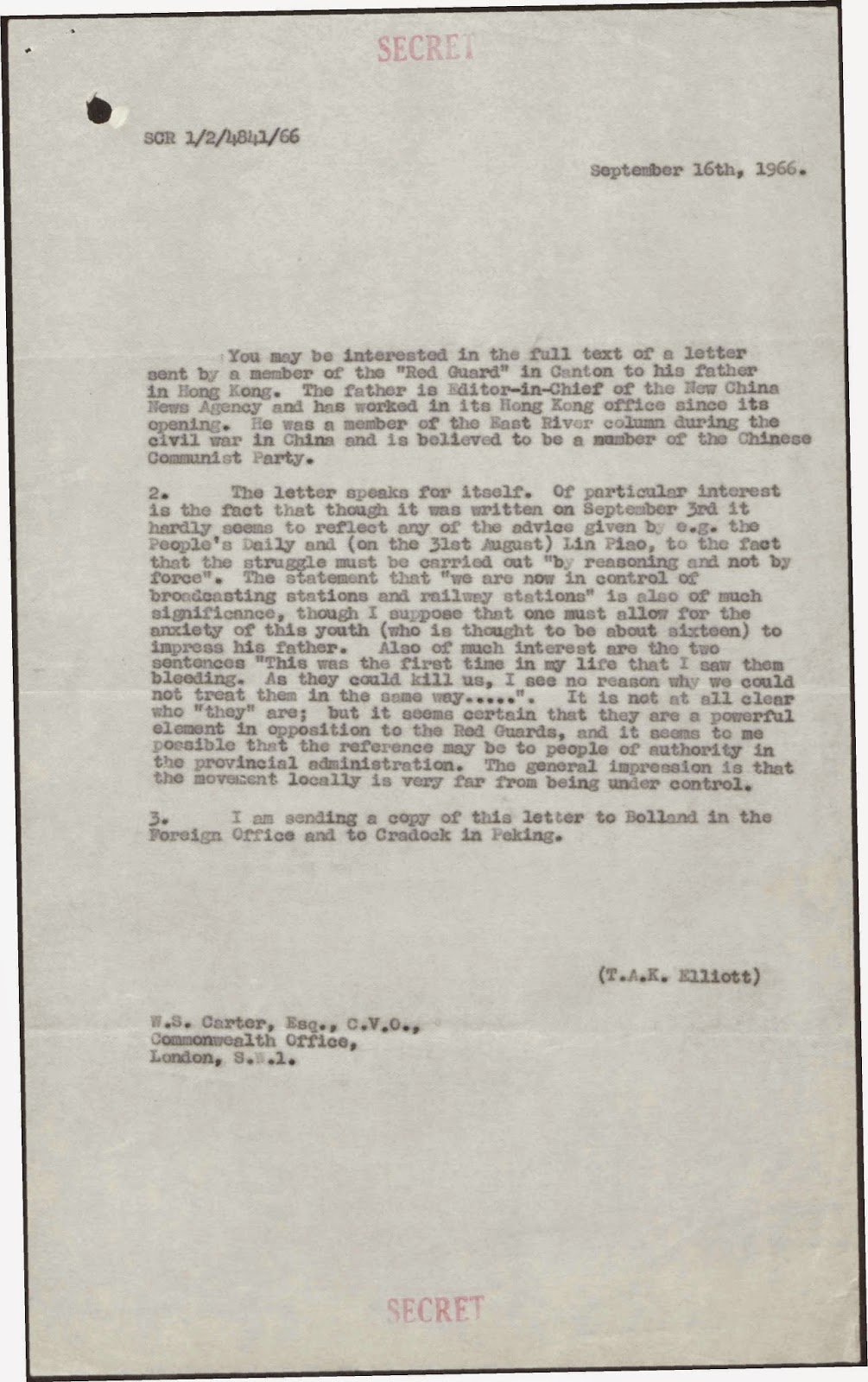 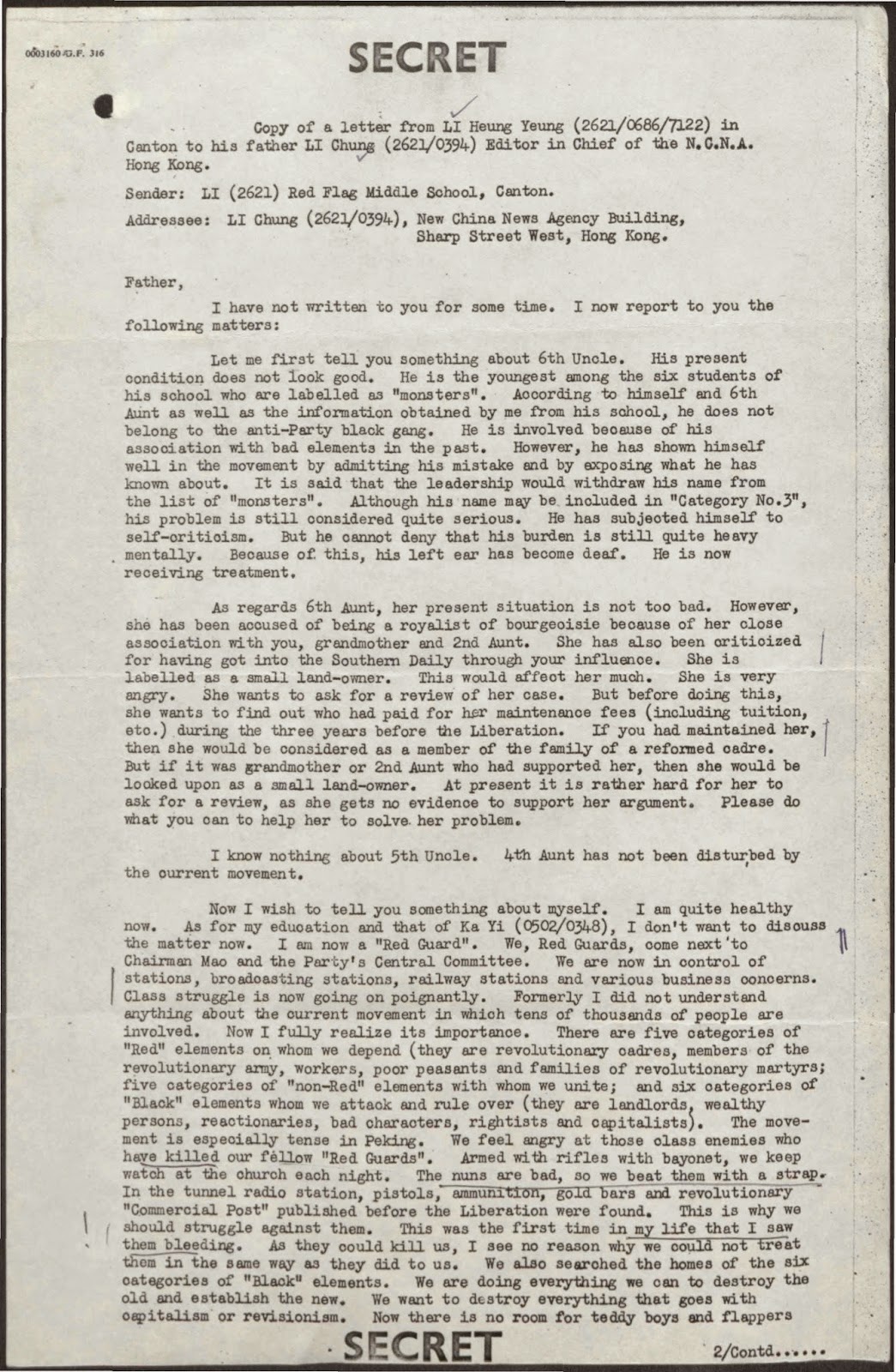