1. Preliminary conclusions regarding the loss of an IDEALIST/TACKLE U-2 in Che-chiang Province, eastern China Mainland; on 8 September 1967, indicate that the aircraft was most probably brought down by ChiCom surface-to-air missile fire. The approximate coordinates where the loss occurred are 30°38' N, 120°25' E, and approximately 65 miles southwest of Shanghai.
(CROSSOUT)

(Next 1 page In Document Exempt)

1.  This memorandum is for information only.
2.  This study results from an exhaustive analysis of all available data which are pertinent to the loss of Article 373 on 8 September 1967, and represents the coordinated views of the Office of Special Activities, Office of Scientific Intelligence and the Office of ELINT.
3.  Facts:
a.  The mission was flown in response to (CROSSOUT) for coverage, on an urgent basis, of seventeen Chinese Communist (ChiCom) airfield targets.

b.  The mission aircraft departed (CROSSOUT) on 8 September. The route was designed to cover six of the 17 highest priority targets. The mission aircraft penetrated ChiCom territory at approximately 0302Z at a point on the China coast approximately 45 nautical miles northeast of Shanghai.  Attachment 1 depicts the planned route of flight, and the actual route of flight (CROSSOUT).

c.  Within the twenty-four hour period prior to mission launch, and again shortly after loss of the mission aircraft, NPIC completed a detailed SAM search of all available photography of the area within fifty nautical miles of the last reported position of the mission aircraft. With the exception of the previously reported SAM sites located at Shanghai, NPIC was unable to detect any new SAM sites. (Attachment 2). On 19 September 1967 the Imagery Analysis Staff of DDI reported discovery of a probable SAM site at Chia Hsing Airfield. Their report was based on an extensive examination of KH-4 photography dated with special emphasis on the Chia Hsing Airfield. A copy of their report is included herein as Attachment 7.
(CROSSOUT)
(Next 2 pages In Document Exempt)

b. TACKLE overflight operational missions will be suspended until these modifications have been accomplished and satisfactorily flight tested (approximately six weeks for critical items).

c.  Upon resumption of TACKLE operational missions, and until the threat is better defined, mission routes will be designed to keep the mission aircraft at least fifteen nautical miles from high priority ChiCom Airfield targets.

d.  An examination of present (CROSSOUT) will be conducted to determine if (CROSSOUT) assignment can provide better data for subsequent post-mission analysis.

e.  Efforts will be made to withhold mission information from all except those who have a confirmed need-to-know.
(CROSSOUT)

8 September 1967
MEMORANDUM FOR THE RECORD
SUBJECT: Resume of NPIC Searches for SAM Sites in China in Support Of OSA

1.   NPIC and OSA have long had formal arrangements for NPIC searches of photography to locate SAM sites in Communist China. On 23 March 1967 a revised Memorandum of Understanding entitled "SAM Search Procedures for IDEALIST/TACKLE Missions" was approved jointly by the Director of Special Activities, DD/S&T and the Director, National Photographic Interpretation Center. This procedure calls for NPIC to be given advanced notice of planned routes for U-2 flights. NPIC uses these canned routes in the conduct of a search of all photography as it is received. The spotting of a SAM site during this search is instantly reported. When OSA specifically takes steps to launch a U-2 mission, the Center is advised. NPIC quickly double checks to make sure that all photography was in fact searched upon its receipt and, an advisory cable is sent from NPIC to OSA before the "go" signal is given. NPIC is normally given word of a pending flight from 30 hours to 12 hours in advance of mission takeoff time. NPIC undertakes to insure that a search of all available photography had been carried out in areas 30 NM on either side of planned route and within a 50 NM radius of the principal targets and suspect SAM areas specified by OSA. NPIC rechecks “suspect” and interest areas indicated by OSA.

3.  Shortly after receipt of news o£ the 8 September shootdown, OSA asked NPIC to undertake a new search of areas believed to be related to the incident. NPIC has completed this renewed search and remains unable to identify a SAM site in the specified areas.

4.  The photography used for this search was from a KH-4 mission and is dated (CROSSOUT). The scale and resolution       may       prevent the      Center’s identification of a SAM. This would be particularly true if deceptive measures such as camouflage were employed to conceal or otherwise disrupt a visible pattern. It is, of course, possible that a SAM position was deployed some time after (CROSSOUT) the date of latest coverage.

5.  One point should be made clear. The Chinese Communist SAM site is unlike the Soviet or Cuban. It lacks fixed signature. Meager SAM resources are deployed with great mobility. Identification of a ChiCom SAM site in photography, particularly at KH-4 type of resolution is difficult. Mobility means that a SAM site, spotted, as such and seen to be operational one day, may be vacant the next.

6.   The attached chart portrays areas researched by NPIC following the 8 September shootdown. Areas within the rectangles were rescanned in detail. Both of the large, circled areas have been thoroughly searched by two separate teams, each team having searched the entire area. The smaller circled area has been thoroughly searched four times, each time by a different analyst. The results were, as stated, negative.

3. ON THE HARD SURFACED RUNWAY SERVING THE AIRCRAFT REVETMENT AREA AT CHINESE SAM SITES, A POSSIBLE VEHICLE PARK WHICH MAY ALSO BE ASSOCIATED IS ADJACENT TO THE TAXIWAY.

5. TO DATE, THE COVERAGE OF THIS SITE IS LIMITED TO SMALL-SCALE KH-4 PHOTOGRAPHY OF FAIR QUALITY. THE SITE CONFIGURATION CANNOT DEFINITELY BE DETERMINED AT THIS TIME. IT DOES MOT CONFORM TO USUAL SA-2 PATTERNS, BUT BEARS SOME SIMILARITY TO KUANG-CHOU SA-2 SAM SITE B 27-2, AS OBSERVED  (CROSSOUT).

6. THIS IDENTIFICATION IS CONCURRED IN BY NPIC.
PHOTOGRAPHY:
(CROSSOUT) . 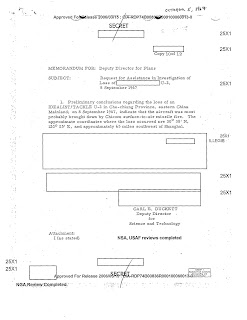 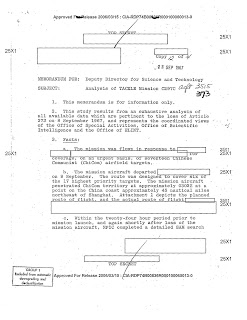 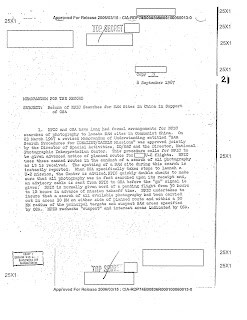 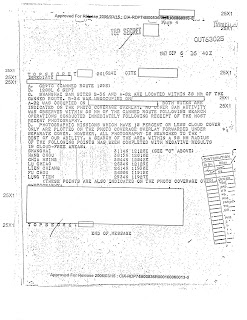 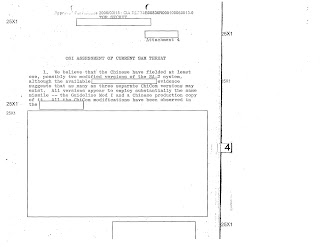 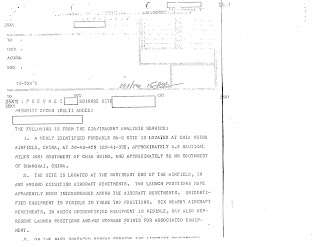