Office of the British


Last night I obtained a few items of interest from our foreign contact in the Foreign Languages Press, some of which provide useful confirmation of earlier information. I regret that this will be the last offering from this particular source as she is today leaving China at the expiry of her contact.


2. Source had apparently seen various documents and reports of the recent speeches of Chinese leaders and had had a number of long conversations with her Chinese colleagues who, perhaps because source was on the point of departure, apparently spoke extremely frankly. Source could remember only a few of the details of what she saw and heard but retained a deep impression that the Maoists were in serious trouble throughout China and had no very clear idea of how to cope with it except to allow the PLA full rein to act in the restoration order. She confirmed that the speeches of 1 September and on other recent occasions had contained very strong injunctions indeed to the revolutionaries to quieten down. As far as she could see these directions were already having some effect in the Foreign Languages Press and the Friendship Hotel. Chiang Ch’ing, who had dealt with revolutionaries particularly severely, apparently said that “tens of thousands” of weapons had been stolen from the PLA and this could not be tolerated. The army must now take firm measures.


3.In his speech Chou en-lai is reported to have said that “We are now six months behind in production but we shall be able to make this up if (sic ) we succeed in the cultural revolution. ”


4. Source had also seen and heard quite a lot of references to the attack on the British office which indicated that it was strongly condemned by the leadership and had been contrary to the instructions they had issued. She had heard, from what she regarded as reliable sources, that the operation against the office had been directly organized and controlled by Yao Teng-shan, the former Chinese Charge in Djakarta. According to this report, red guards were sent to Yao’s own house two days after the attack on us and ransacked it as a reprisal. When I refered to the possibility that the alleged regret on the part of the Chinese leadership about the events of 22nd was merely a tactical maneuver and that these stories had been given to her with the deliberate intention that she would pass them on to us, source said she was quite convinced that this was not the case. She had had reports from very sources that the attack was deplored by the central leadership and believed they were genuine.


I am copying this letter to Brian Gilmore in Washington and to Emrys Davies in Hong Kong. 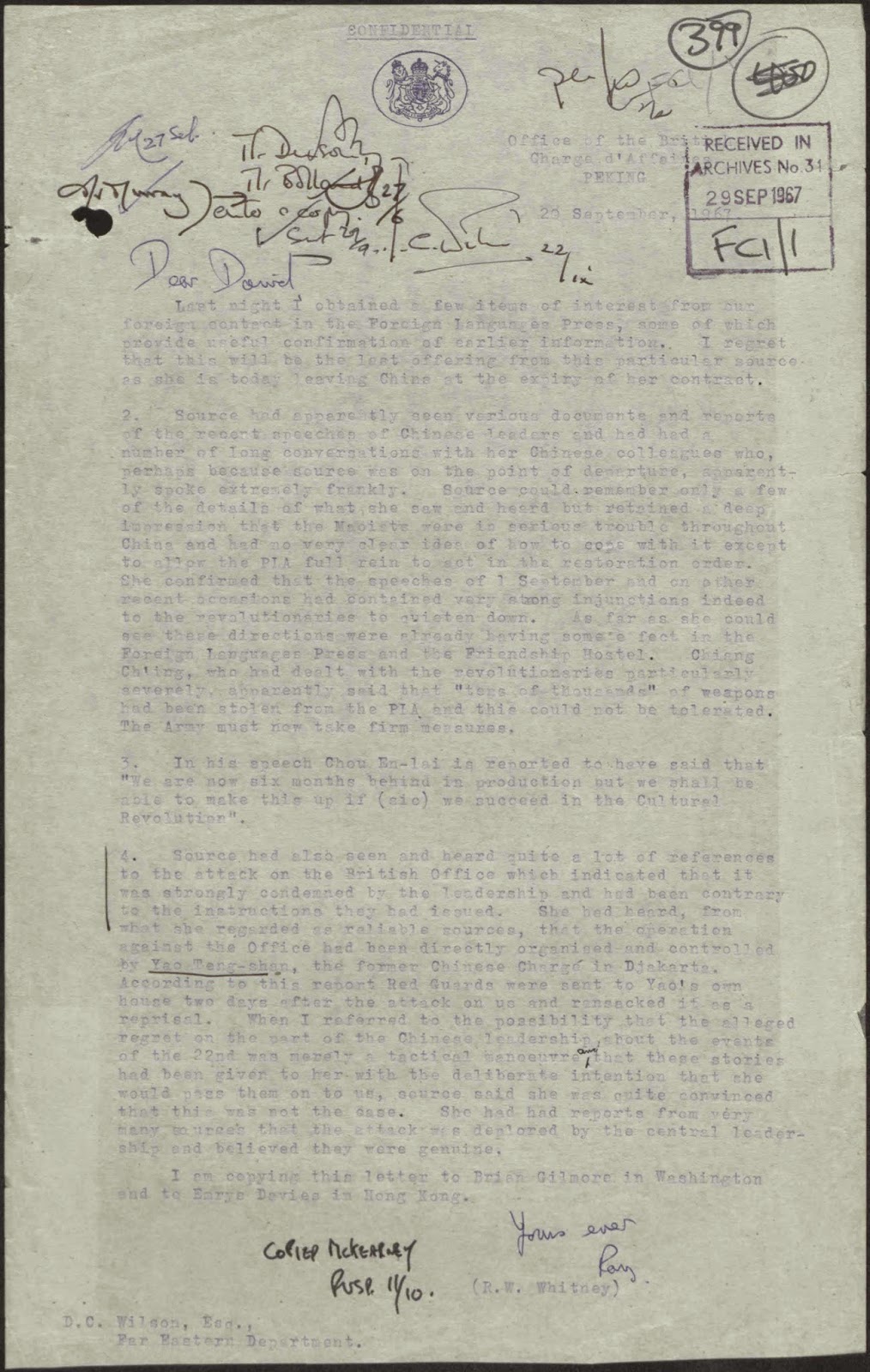