Although we are still gated within our compound we have gained a clear impression from conversation with the servants and our colleagues that the security situation within Peking has deteriorated very noticeably over the last few weeks.

2. The Peking Revolutionary Committee, which is already the second revised version of the old Municipal Committee and which was unequivocally endorsed by the Cultural Revolution leadership in April, is now under sustained criticism. For the past few days groups of obstinate Red Guards have camped outside the Committee building and have refused to leave until they were received by the person whom they wished to see. We have also heard reports that on 4 September a group of Red Guards broke into the building and fought with the occupants. A considerable amount of damage was apparently done during the fracas.

3. One Committee official who has been under particularly heavy fire is Kao Yang-wen, and there have been a lot of posters demanding that he be exposed to the masses. Madame Nieh Yuan-tzu is also in very serious trouble. We have been accustomed to seeing attacks on her from rivals in Peking University and from outside groups but hitherto she has always been supported by the Cultural Revolution Group. Now apparently she has lost this support. Mao is alleged to have said that she can no longer be called a Marxist-Leninist. In reply Nieh is said to have had the temerity to call Chiang Ch'ing the "instigator of civil war".

4. Life for the ordinary residents of Peking has also become very much more difficult over the past weeks. We have had many reports from our own domestic staff and those of other Missions that people are very reluctant to venture out late at night. One particular Chinese contact said very recently that he only travels home at night along the main roads and avoids the small ill-lit alleys. He also said that he no longer carries his wrist-watch or his wallet to and fro from the flats. According to him some of the alleys are patrolled by armed soldiers late at night, but the others are infested with gangs of teenagers. The police are generally powerless since the youths always reply "We are Red Guards, nurtured by Chairman Mao". Street fights are now common-place even in broad daylight. We reported earlier the fight at Hsi Tan market which resulted in a great deal of damage being caused and brought about the closure of the market. Apparently the market is still shut and the fights have still not ended there. Many people have witnessed street brawls. Perhaps the most common sight is a crowd setting on to an individual, who has perhaps been detected in theft. I realize all of this must sound incredible, especially to those who like yourself have been in Peking during the days when it was one of the safest cities in the world. I suggested very tentatively to one of our staff that the situation in Peking at present was perhaps almost as bad as the days before Liberation. He was very indignant about this and said that at least before Liberation the thieves were confined to the outskirts of Peking. Now they were all over the city. You will have read our reports of the burning down of our Mission during which wrist-watches were looted and the female staff present were molested. This is just a general symptom of the extraordinary disintegration in social order in Peking over the past weeks.

5. You will have noticed that the remark above about the Red Guards being nurtured by Chairman Mao hardly fitted in with the picture of universal veneration of Mao which the official press likes to present. We have also evidence that this cynicism is not confined to people in daily contact with foreigners. A member of the French Embassy recently had a puncture in his tyre as he cycled round the town. He was directed by a policeman to go to a nearby cycle-shop where the man in charge began to repair the tyre. As usual a large crowd gathered round to stare at the foreigner, and a conversation was started up. When our colleague asked what was happening in Peking, one of the people answered that the situation was pretty bad but they never really knew what was going on. The Frenchman then asked them whether they read the People's Daily which had plenty of news. The man answered scornfully "The People's Daily? That's full of nothing but him", pointing to a portrait of the Chairman. All of this was said before a sizeable gathering but no-one demurred.

6. We realise that much of this kind of reporting is very piecemeal and it is easy to make false generalisations from small details. Nevertheless, it seems clear that small-scale theft and hooliganism are rampant in Peking on a scale which would have seemed unthinkable a few months ago. Many of the young generals appear to be totally disillusioned and cynical about what the Cultural revolution is meant to bring for them . From conversations with older Chinese it is evident that the older generation too has no illusions about the harm caused by the present movement. Bearing in mind the general disorganisation in Peking at present it is perhaps hardly surprising that criticisms of Mao should be openly voiced. All the same if Mao is being publicly ridiculed in the capital one hesitates to guess what they are saying about him in the other cities.

7. Please treat the above material

with care, particularly that coming from Chinese sources.
I am copying this letter to Emrys Davies in Hong Kong and Brian Gilmore in Washington. 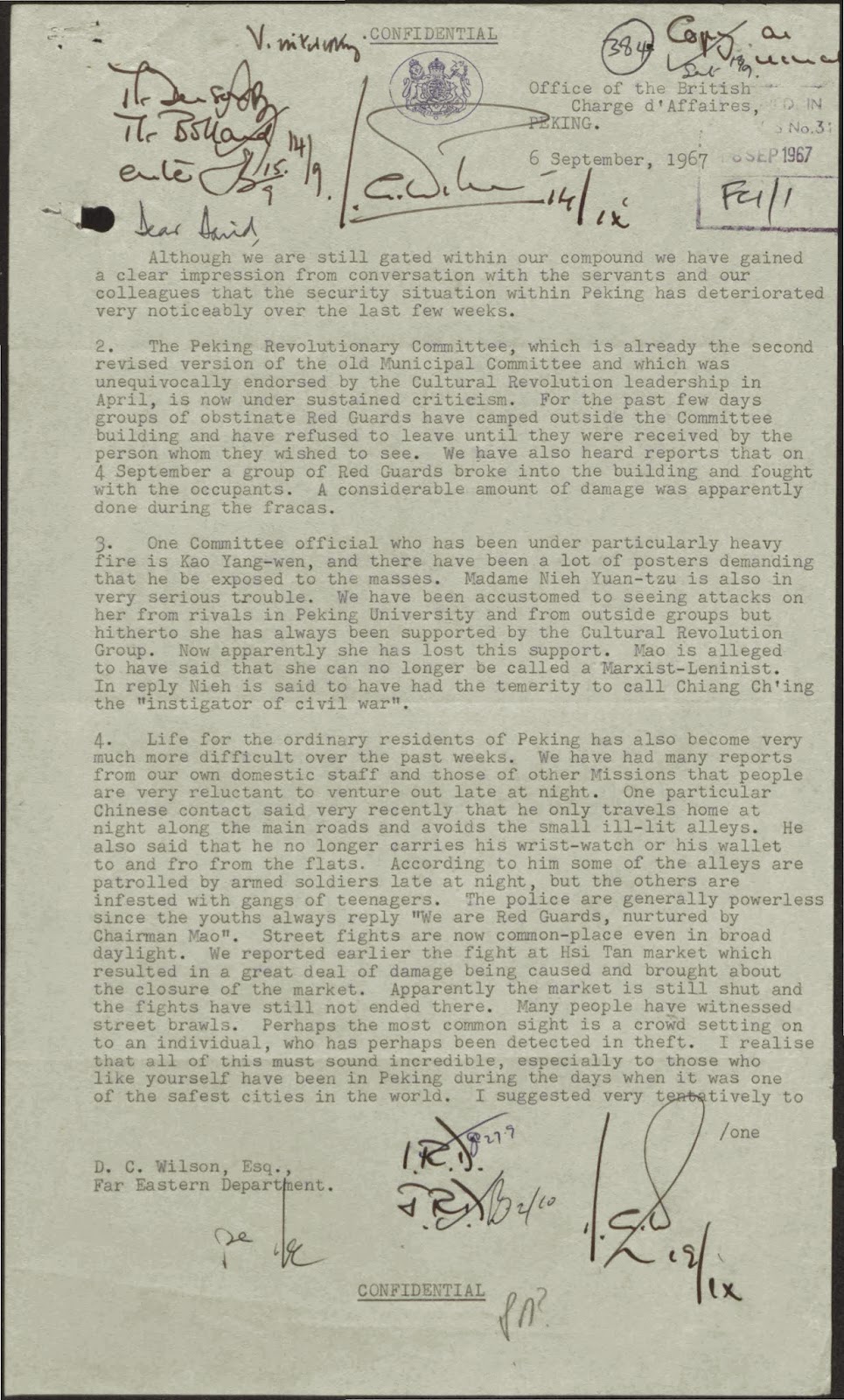 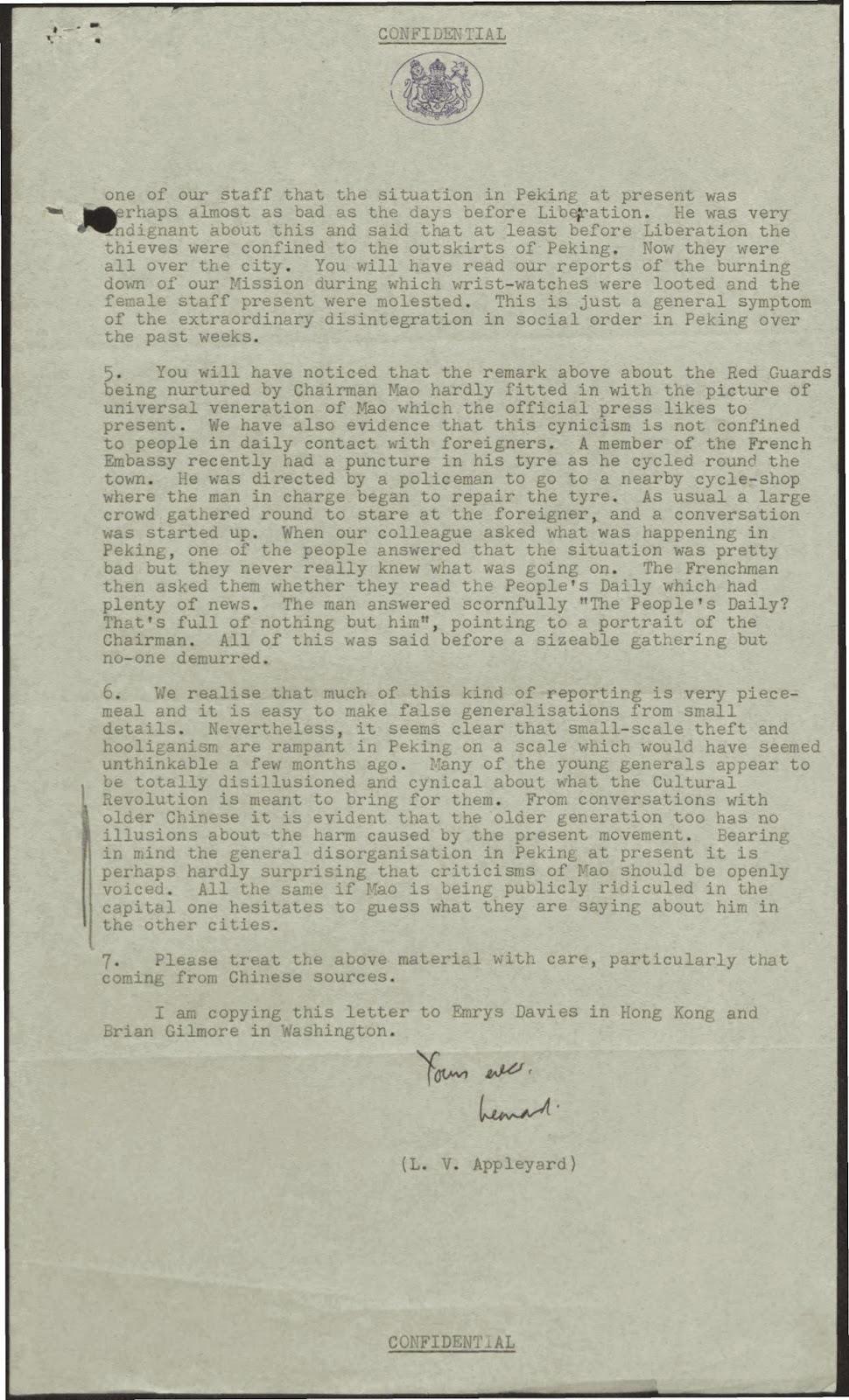