Dear Fred,
I lunched today with Etienne Manac'h, who leaves next Wednesday to take up his post as French Ambassador in Peking. His departure has been delayed because his Letters of Credence, signed by General de Gaulle, became invalid when the General ceased to be President on 28 April, and had to be replaced by Letters signed by M. Poher.

2. Manac'h told me that he had been received by General de Gaulle on 22 April. The General, who said incidentally that this might be their last meeting because he would depart at once if the referendum went against him, said that his essential task in Peking, whatever the result of the referendum, was to make the Chinese realise that France was independent. It was true that France remained in the Atlantic Alliance but in the course of the years the idea of the Alliance had lost almost all real content. If the Chinese ever seemed to believe that France was displaying a preference towards either the Americans or the Russians in matters concerning China, it was the business of Manac'h to convince them that this was not so.

3. As to American/Chinese relations, the General said that President Nixon had indicated to him, much more clearly during their talk in Washington at the time of Eisenhower's funeral than at their earlier meetings in Paris, that he intended to move towards establishing diplomatic relations with China and in consequence towards accepting that the Peking Govern­ment should represent China in the United Nations. The General said that he believed the Americans had weighed up this decision very carefully, because they realised that their recognition of Peking would dis­quiet the Russians and they attached even more importance to achieving a detente with Moscow than with Peking. He thought that they had nonetheless decided to recognise Peking in due course, because they felt that they could make the Russians under­stand that their motive in doing so was not one of hostility to Moscow.

4. As to the future of Sino/Soviet relations, the General said that he thought there was no danger of an immediate collision, but equally no hope of a real reconciliation, even though temporary agreements over frontier problems might he reached. He believed that there was a fundamental rivalry between the two nations, which would intensify.

5. Manac'h said that he was telling me all this in very strict confidence. I hope that the confidence can be respected. The General's remarks about French independence have obviously lost some of their importance now that he is no longer President, but what he had to say about American intentions will no doubt still interest you. 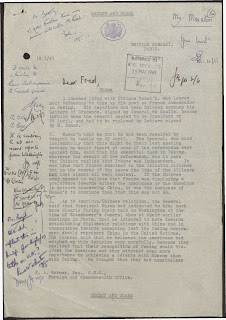 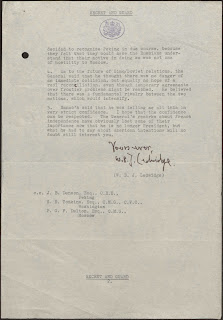