CONFIDENTIAL
British Consulate,
TAMSHUI.
5 MAY, 1969.
Mr. E. Wainwright, M.P. and vice-chairman of the Anglo-Taiwan Parliamentary Group, visited Taiwan from 17-30 April as a guest of the Nationalist authorities. I had been warned of his coming by the Nationalist Government Information Office (GIO) and had intended to get in touch with him and offer any assistance. In the event he telephoned to me the day after his arrival and joined us that evening at a cocktail party my wife and I were giving to mark the change of Deputy Consul here.

2. Mr. Wainwright had the usual crowded programme of calls and visits arranged for him by the GIO but I did manage to see a little of him, although not in private. He came to my house for a stag dinner with the Australian Ambassador, Mr. Oliver Woods of the Times, local representatives of Reuters and AFP, Spencer Moosa, until recently AP representative in Taiwan, Richard Hughes the Sunday Times and Economist Far Eastern representative based in Hong Kong, Brereton and Featherstone. There was a good deal of stimulating political talk, including an examination of the Victor Louis affair since Richard Hughes was in Taiwan to follow up a rumour that Louis, believed at the time to be in Japan, was about to pay a second visit to Taiwan.

3. Mr. Wainwright and I were the only two non-Chinese present at a tea party given by the British Returned Students Union on 29 April. This took the form of previous such parties, as given for other visiting M.Ps and for Mr. Julian Amery last November.
Mr. Wainwright was introduced by Mr. Kuo Chi (M.Sc., London School of Economics) a member of the National Assembly and of the Standing Committee of the Kuomintang and Secretary-General of the Planning Committee for the Recovery of the Mainland.

4. In his brief introduction Mr. Kuo referred to Mr. Wainwright as "Vice Chairman of the Sino-British Friendship Association of the British Parliament” and to me as "the only British official assigned to Free China".

5. In his response Mr. Wainwright addressed his audience as "fellow members of the world" and said that this was his first visit to "this part of your country". He referred to his listeners as "the nucleus of your race". The Chinese, he said, were a civilised people when British forebears were living in caves; they had slept for a thousand years but were now waking up and the Western world would be forced to take notice of them. He implored the authorities in Taiwan to pay full attention to the need for scientific education and not to make the same mis­takes as Britain which had tended to over-emphasise the arts and social sciences. He was rather bitter when mentioning HMG's proposals for new legislation to control the trades unions; if this were to happen, he said, the British government would have failed the people and if government failed the people it no longer deserved to govern. He hoped that the nationalist authorities (the expression he used was "your government") would take notice.

6. Mr. Wainwright said that if, when he reached Hong Kong, he were asked to give his impressions of Taiwan and to compare conditions here with conditions on the mainland he could not do this, since he had not visited the mainland. But if the author­ities on the mainland were to permit him to go there and to provide the same facilities for unrestricted travel and conversa­tion that he had had in Taiwan then, he said, he would be able to draw a comparison between conditions in the "two parts of your country".

7. Mr. Wainwright said that he would be delighted to answer any questions, but not one was asked.

8. Mr. Wainwright left for Hong Kong on 30 April. The press gave little attention to his visit. I enclose a copy of what was perhaps the main press item. It describes Mr. Wainwright as "deputy chairman of the Anglo-Free China Parliamentary Group"; another press mention referred to him as "vice-chairman of the Republic of China sub-committee” in the house of Commons.

Yours ever
Ray Bray
(R.J. Bray)

Taipei, April 24 (CNA): British Parliamentarian Edwin Wainwright said yesterday the British people knew little about the Republic of China.
Wainwright, who came here Thursday last week for a two-week visit, said in a press interview he had found conditions in Taiwan "far more important than I knew".
A member of the British House of Commons, the visitor, is the deputy chairman of the Anglo-Free China Parliamentarian Group.
Sinece his arrival here a week ago he has met with government leaders and visited agricultural installations.
Describing the visit "very interesting", Wainwright said he was impressed by the rapid growth in Taiwan during the past twenty years in housing, education, hospital and social recreation.
He said he will make a report on the visit to his group after returning to London.
Wainwright said the Anglo-Free China Parliamentarian Group was founded about 18 months ago by British parliamentarians from both parties who had read articles about Taiwan’s progress and had become interested in the country.
The group often invited people from Taiwan to speak at its meetings to brief them on the situation in the Republic of China, he said.
He said he himself came here "with an open mind" to find out what the conditions are and how the government runs the economy.
The Briton who had had what he called "frank and useful talks" with Chinese government officials and parliamentary leaders said he was quite satisfied with the visit.
Wainwright is scheduled to conclude his visit next Wednesday and leave for Hong Kong. 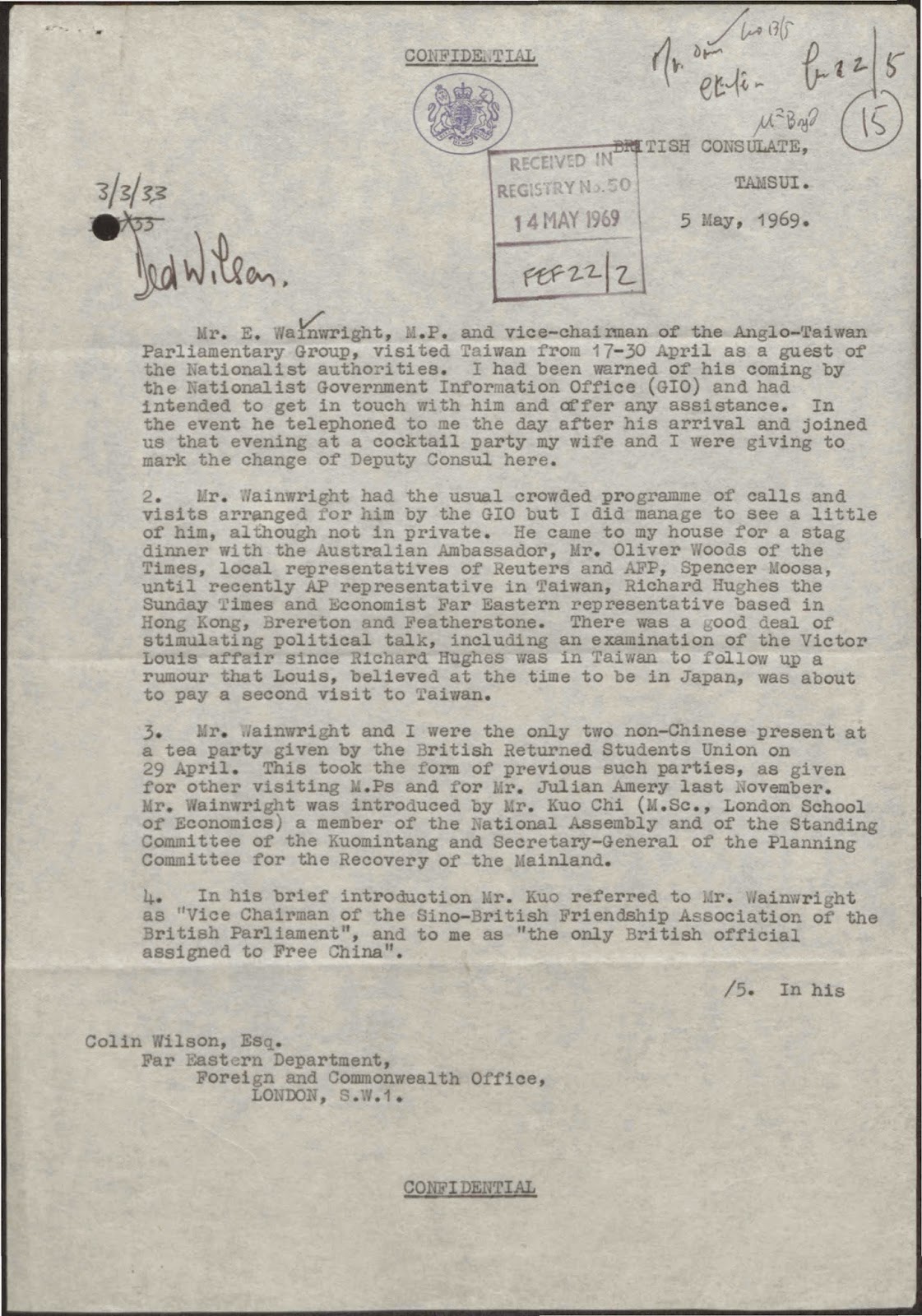 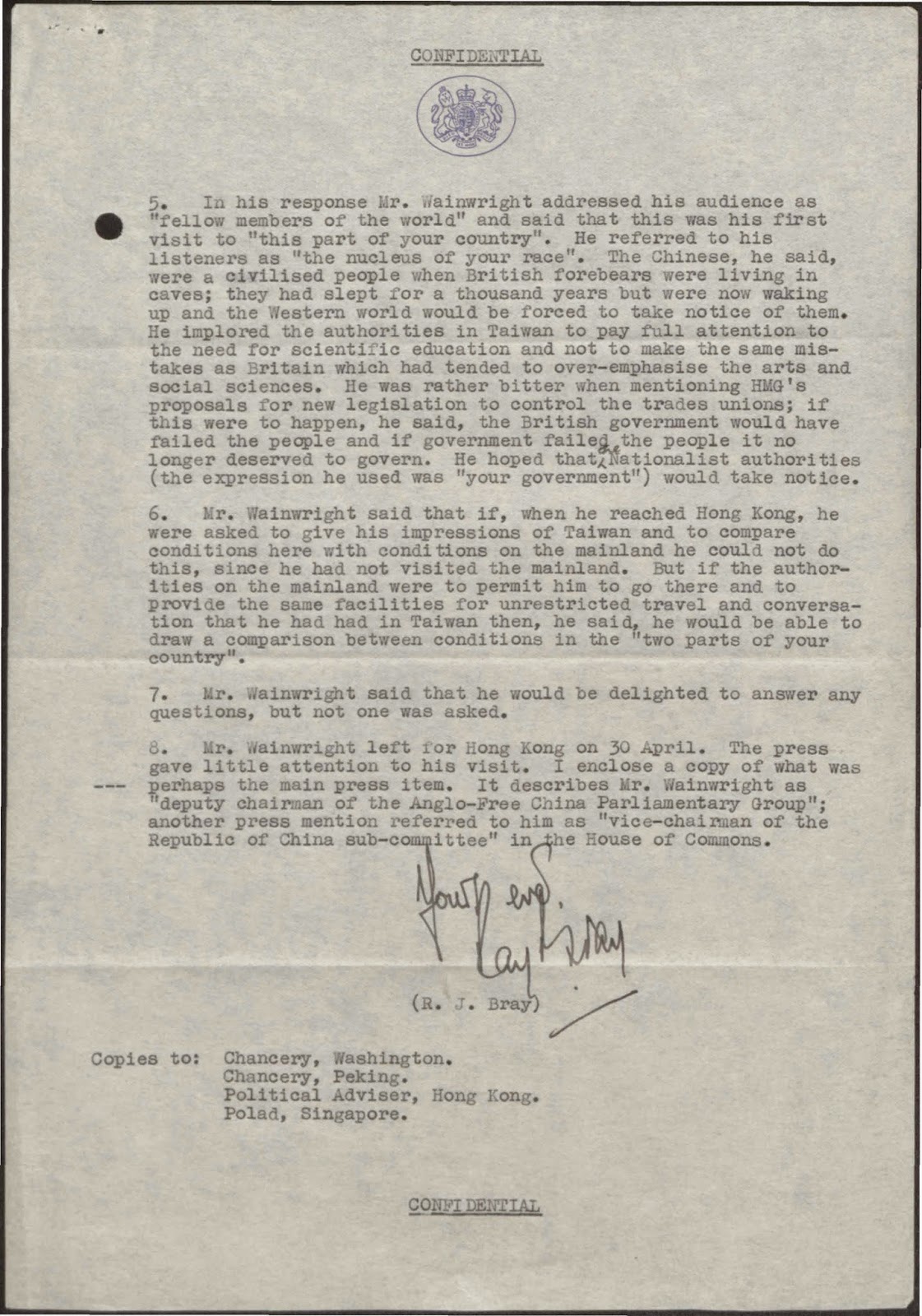 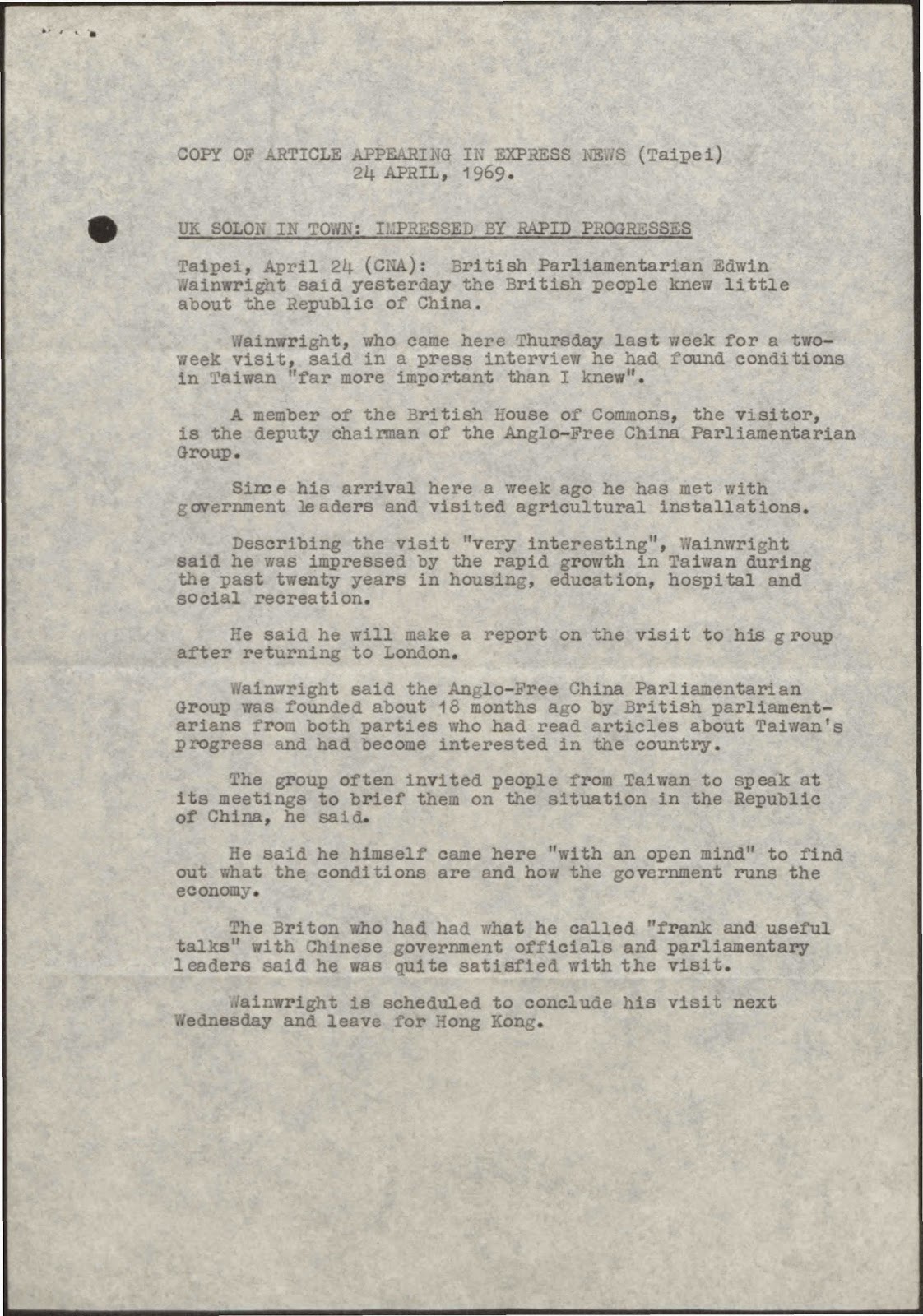