PROBLEM
1. Over the past year the Russians have succeeded in establishing a considerable, though fluctuating, presence in Hong Kong through visits of Soviet merchant vessels and through arrangements for the repair of Soviet merchant ships in the Colony dockyards. The risk of Soviet subversive activities and of embarrassment in our relations with Peking, has increased and seems likely to continue to grow unless we take steps to control the scale of Soviet access to the Colony.

ARGUMENT
2. For many years the Russians have sought to expand their official presence in the Colony but both we and the Hong Kong Government have always refused. At present they have a small permanent official presence in Hong Kong through two Sudoimport engineers employed in the Hong Kong and Whampoa docks. These engineers are normally given 6-monthly visas only and must be replaced after this period. The Hong Kong Government agreed to give the latest engineers 9-monthly visas on the grounds that their departure after 6 months would be inconvenient to the dockyard.

3. The Russians have now succeeded over a period of time in circumventing our ban on a further official presence by having large numbers of Soviet seamen in the Colony at any one time, either on ships putting into the Colony during a cruise visit, or on ships undergoing repair in the dockyards. The full extent of the Soviet presence is set out in Mr Howells' letter of 23 February 1971. It is clearly considerable and is growing. For example, in any one month in 1970 there was an average of no less than 362 Soviet seamen in the Colony.
13 Soviet merchant vessels were repaired in the dockyards in 1970; many stayed for long periods. The crews include Mandarin-speakers, who have established contacts. There is at present no restriction on their movements in the Colony. It would not be difficult for the Russians to maintain some continuity in the personnel by sending back the same people on different ships under different names.

4. The situation has recently become even more disturbing. On February 9 this year local Hong Kong newspapers reported that the crew of a Soviet ship had been distributing pamphlets criticising Chinese policy to local Chinese dockyard workers. We expressed surprise and regret about this incident to the Soviet Embassy, and were subsequently told by a member of the Embassy that this was "a private initiative and that no doubt the necessary steps were being taken”. In mid-April the Soviet Embassy asked permission for 2 "scientific research vessels" to put into Hong Kong for 3 days each in July and August to replenish supplies. They also asked for information on the current regulations for visits by such vessels to Hong Kong. The Governor's advice (Hong Kong telegram No 311) is that we should refuse both requests. This question will be the subject of a separate submission.

5. The Chinese have not yet protested about the numbers of Soviet seamen in the Colony although there have been warning hints in the communist press in Hong Kong that they are aware of the situation. The Chinese are understandably sensitive about Soviet activities in Hong Kong. It is clear that the Russians are interested in Hong Kong as a source of intelligence on China and possibly also as a springboard for intelligence activities directed against China.

6. We are concerned about the possibility of Soviet subversive activities within the Colony itself. We must assume that if the Russians are allowed to maintain and increase their present access to Hong Kong, they will eventually mount operations there on a large scale. Hong Kong Special Branch are already fully stretched in dealing with other security problems such as the surveillance of Chinese and nationalist Chinese intelligence organisations. They do not have the facilities or man-power to deal with Soviet activities as well.

7. At our request, the Political Adviser in Hong Kong has sent us a paper setting out policy recommendations for dealing with this problem. We are in general agreement with the recommendations (but see paragraphs 8-11 below). It is clear that there is no easy solution to the question. Ideally, we should have liked to tell the Russians that they must reduce the number of ships which put into the Colony or have repairs carried out there. However, our shipping policy has always been to encourage free entry to merchant ships all over the world. The Hong Kong Government would be reluctant to agree to banning Soviet ships being repaired in the Colony since this would entail a major row with the dockyard

8. We should also have liked to tell the Russians to confine the crews of ships under repair, and the crews of cruise vessels, to their ships while in port. Unfortunately, as far as the crews are concerned, this would be in contravention of ILO Convention Number 108 of 1958 (the Seafarers' Identity Documents Convention). Article 6(1) of the Convention provides that signatories shall allow the entry into a territory for which the Convention is in force of seafarer holding a valid seafarers’ identity document "when entry is requested for temporary shore leave while the ship is in port". A seafarer's identity document takes the place of a visa for this purpose. It would be a contravention of the Convention to demand a visa as well. The Convention was applied to Hong Kong in 1964 and was ratified by the USSR in 1969.

9. At first sight Article 6(4) appears to give us a let-out. It provides that nothing shall restrict the right of the signatory to prevent any particular individual from entering or remaining in its territory. In fact, the scope of the paragraph is limited. It would enable us to keep out individual Russians but not all Russians as such. To argue that as each Russian individually presented himself he could be individually refused would be to interpret the terms of the Convention in bad faith.

10. A more promising line of approach lies in the provisions of Article 6(1). The expression "temporary shore leave" is not defined anywhere in the Convention in more exact terms. The interpretation of this phrase is thus the responsibility of individual signatories. In theory, it would be possible to interpret "temporary" in terms of minutes. In practice this would clearly be unreasonable and would expose the Hong Kong Government and, ultimately, HMG to censure from the ILO. The Legal Advisers see no reason however why we should not establish a limit of six hours per day. They agree that even in the case of crew with valid identity documents we could also justify restricting parties of visiting seamen to twelve at, say, hourly intervals. In addition we could give the Russians warning that any breaches of these restrictions or other misconduct would result in the immediate confinement on board of the group concerned in the event of minor breaches or misconduct, and of the whole crew in the event of serious breaches or misconduct, in either case until the ship concerned left port.

11. The Convention only applies to seamen with identity documents issued in accordance with the terms of the Convention. It does not apply to passengers on cruise vessels or to crew without such documents. There would, therefore be no objection to telling the Russians that Soviet nationals in the latter category (ie crew without documents) will not be admitted. There are likely to be few of these. As regards Soviet passengers on Soviet cruise vessels, the only sanction open to us is to insist that they should have valid visas for Hong Kong if they wish to go ashore. It is not clear whether present practice in Hong Kong is (as seems likely) to allow such passengers to disembark for a few hours without visas during the ship's stay in port. We propose consulting Hong Kong on this point.

12. We doubt whether there is a real risk of Soviet retaliation, against crews of British ships visiting ports in the Soviet Union if we take action on the above lines. We propose to make it clear to the Russians that these measures are necessary because of the special position of Hong Kong. HM Embassy at Moscow have recommended that any approach to the Russians should be made in Hong Kong through the Chairman of the Kowloon Docks to the two Sudoimport engineers. Their argument is that it would be best to keep the issue as localised as possible. EESD do not accept this. On a matter of such importance the correct channel would be the Soviet Embassy here.

RECOMMENDATION
13. I recommend therefore that, subject to the further views of Hong Kong and Moscow, we tell the Soviet Embassy here that:
a.                 We view with concern the excessive number of Soviet nationals present in the Colony during the repair of Soviet merchant vessels in the dockyard.
b.     Crew members of ships under repair or of cruise vessels or other ships holding valid seafarers identity documents will be allowed on shore in groups of twelve at hourly intervals and for periods of up to six hours per day only. Crew members without valid seafarers identity documents will be confined to their ships. Any breaches of these restrictions or other misconduct will result in the immediate confinement on board (i) in the event of minor breaches or misconduct, of the group concerned, and (ii) in the event of serious breaches or misconduct of all crew - in either case until the ship concerned leaves port.
c.     Soviet nationals who are passengers on Soviet cruise vessels calling at Hong Kong will require visas if they wish to go ashore.
d.     If the Soviet Embassy say that these regulations are contrary to Soviet practice as regards the treatment of British seamen visiting the Soviet Union, we propose to reply that these measures are necessary because of the special position of Hong Kong. They will not affect current regulations applying to Soviet seamen visiting this country.

14. I further recommend that we suggest to Hong Kong that in future they grant only 6-monthly visas to the two Soviet engineers. 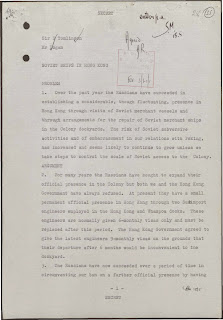 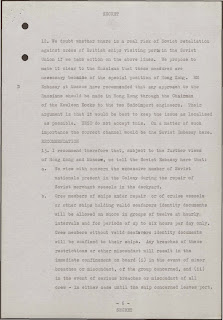 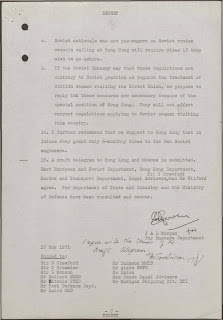