Dear Mr. Friar,
You may remember contacting me in February this year regarding Deng Qingshan, a prisoner in the PRC whose case is summarized in the Appendices of Amnesty International's report on Political Imprisonment in the PRC. I have now received the information you required about the place where he was arrested in 1970 in Guangdong province.  It is:
( 邓清山 )  南和大队
北就村
冲蒌公社
The name of the county was not specified, but I imagine that the Chinese authorities should be able to trace it with the name of the people's commune given above.
I hope this information can still be of use to help in the release of Deng Qingshan.
Yours sincerely,
Arlette Laduguie
Asia Research Department 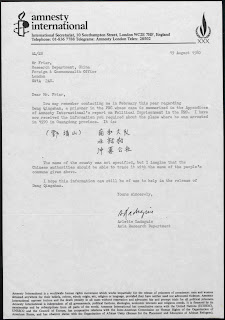 APPENDIX IV
Deng Qingshan
Deng Qingshan's background and the circumstances which led to his arrest during the 1970 "one-strike, three-anti" campaign were described earlier.1 Information about his case was published in 1976 in Huang He, a Chinese-language review published in Hong Kong.2 The account below is based on this report and on additional information given by direct witnesses of the affair. Although Amnesty International is not in a position to check the specific details of this account, similar cases of arbitrary arrest at that period have been reported and some accounts of the "one-strike, three-anti" campaign elsewhere are like this one.
In 1970, shortly after the "one-strike, three-anti" campaign began in his production brigade, Deng Qingshan was made the "target" of the campaign because of his "bad" background. This decision was taken by the brigade's cadres and was not made public. It was the outcome of three days of meetings between the following people:
the brigade's Party members
members of the "Security Protection Committee"
the production teams' leaders (rural brigades are subdivided into    production teams)
members of the Youth League (the youth organization of the Communist Party)
the brigade's political propagandist (Maozedong fudaoyuan).

After these meetings, an investigation team was formed in the brigade, comprising the Party Secretary, the head of the Security  Protection Committee, the head of the militia, some members of the  "team in charge of carrying out the class struggle" (douchadui) and some people responsible or taking notes.
They all settled in Deng's production team for a few days. Members of the team first talked to individual "poor peasants" and "activists" about the class struggle and the need to find class enemies. Soon their actions and speeches created a tense atmosphere in the production team. People did not know exactly who was going to be the "victim" but understood clearly that it was a serious affair. The team then displayed several slogans:  "We should drag out the class enemies" . . . "You had better confess now" . . . "Confession deserves clemency, resistance deserves severity" . . . and "mobilization" continued in various ways. Two or three days later, a big meeting was organized for all members of the production team. They were told that there was a "counter-revolutionary" among them whom everyone should denounce, but the name of the counter-revolutionary was not disclosed. People were frightened and started thinking of what they could report about others. They were asked to write down whatever they knew which seemed wrong to them. Those who could not write well were given help. The meeting lasted a long time because many people who presented their papers to the Party Secretary were told that they were not "good enough" and had to be rewritten.
Finally, 81 denunciation papers were collected; most of them unimportant. However, some of them concerned several young people in the village who, in one of the papers, were accused of having once stolen a fish and were said to be often in Deng's company.
These young men were taken to the brigade's headquarters by the investigation team and a "study class"3 was organized for them. They were urged to confess their "illicit relationship" with a "counter-revolutionary". As they were unable to say anything, Deng's name was then mentioned and they were asked to say what they knew of him.
Meanwhile, some members of the investigation team went back to the production team to ask the peasants to denounce these young men. The previous process was repeated and in the new denunciations the investigators found accusations against two of the young men. One was denounced for having had an "illicit sexual relationship" with a woman and the other for telling a story to some peasants about the Emperor or the Zhou dynasty and his concubine, from which it was deduced that he compared Mao Tsetung with the tyrannical Emperor and Mao's wife with the cruel concubine.
Once this information was brought back to the brigade, these two young men were taken aside by the investigators. The first was threatened with being labeled a "bad element" unless he made up for his crime by "exposing" Deng. Frightened, he testified that Deng had once told him that Mao had been transformed from a snake into a man, and, every year, had to go swimming at the time when the skin changed. To a Chinese mind, this would sound more like a peasant's story than one told by an educated youth and it seems unlikely that Deng was its author. Nevertheless the statement was written down, signed and finger-printed by the young man. The other young man was in his turn threatened with being branded a "counter revolutionary" for slandering Chairman Mao with the story of the Zhou Emperor. He then accused Deng of having told the story and he, too, signed and finger-printed a statement. The two of them were then allowed to go home. The other young men who had been taken with them to the brigade were then asked to confirm the charges, which they did, for fear of being kept longer in the "study class". Their testimony was also written down and their finger-prints taken.
This completed the first part of the preliminary investigation; the evidence of two "crimes" committed by Deng plus witnesses had been found. The second part began with the return of the investigation team to Deng's production team, where the "masses" were again mobilized. Twelve "poor peasants" were found to confirm the charges against Deng and to give additional details. They also made statements which they signed and finger-printed and a first dossier (shumian zuixing cailiao) was written, including the following information:
1.  Deng's background and class origin
2.  his two "crimes"
3.  the places and times at which the "crimes" were committed
4.  the witnesses to each of the "crimes"
5.  Deng's acceptance or rejection of the above facts.

Deng was then arrested by the militia, taken to the brigade for interrogation and told to confess. He did not yet know precisely what he was accused of. The cadres gave him the dossier to read. Under point 5, he could write either "conforms with the facts" (shushi) and "I admit my crimes" (renzui) or "does not conform with the facts" (bu shushi). Deng was urged to write something. He had, in fact, little choice, because refuting evidence given by 12 "poor peasants" was an impossible challenge and the only other alternative-admitting the crimes- would make him a "counter-revolutionary".
At first, therefore, he refused to say or write anything. A "struggle meeting" was then called-the whole brigade stopped working for an entire day to attend it. Deng was confronted with the young men and the 12 "poor peasants" who had denounced him and who, more than anybody else, were adamant that he should admit the crimes. In this situation nobody would dare to speak in his defence. Deng was pushed, insulted, even beaten and yet did not confess. Finally, the brigade's Party Secretary threatened to write on the dossier that Deng had "resisted to the very end"-a powerful threat in China as the official policy of "leniency to those who confess, severity to those who resist" is well known to everyone. At that point, Deng had no choice but to sign the statement and he wrote "renzui" ("l admit my crimes").
A "recommendation for arrest" was then written by the brigade cadres and sent with the dossier to the commune's "Security Defence Group". At the same time Deng was sent to the commune and his case was no longer the responsibility of the brigade cadres.
This was the starting-point of a process of reinvestigation which was carried out in three stages. Investigators from the commune were sent to Deng's production team to interrogate the witnesses, especially about factual inconsistencies in the dossier. The commune's investigators, however, began their investigation by assuring the peasants repeatedly that they were "confident in the masses and in the Party's grass-roots"-a guarantee or protection for the witnesses who confirmed their statements. The dossier on Deng which was finally compiled by the commune contained fewer inconsistencies than the brigade's dossier.
The commune in turn sent its own dossier of recommendations to the county Public Security authorities who, after again investigating the case along the same lines, issued an "arrest warrant". Deng mean-while had been transferred to the county's detention center and was now formally "arrested". As the case was considered important, the county authorities handed the dossier to the higher authorities in the district (zhuanqu).
The third reinvestigation was therefore made by officials from the district Public Security Bureau. This time a more detailed investigation was made. However, in order not to intimidate the witnesses, the district investigators explained again to the peasants that "they were confident in the masses, in the Party's grass-roots and were standing at their side". New details about the crimes were therefore discovered which made the final dossier better and fuller. It was sent by the district to Deng's production brigade for approval. The brigade's Party Secretary and the member responsible for Public Security signed it. The district's dossier did not include the original dossiers prepared by the brigade, commune and county, which were never seen again.
Several months later, preparations were made for passing judgment on Deng. Some officials from the district came to the production brigade for "consultations with the masses", and copies of Deng's dossier were distributed to the production teams. In addition to information about the case, some space was reserved in the dossier for the "opinions of the masses" and for the "opinion of' the Party's grass-roots". A meeting was organized for this purpose, but people did not quite know what to say and proposed all sorts of things; some shouted "execution". The brigade's Party Secretary, on the other hand, seemed to feel some remorse and wrote on the dossier: "[Deng] admitted his crimes, cooperative attitude, [he] deserves clemency".
The district officials left the brigade after having collected the "opinions or the masses" and judgment was decided upon outside the brigade. In November l970, a district Public Security Bureau public notice announced sentences passed on a number of offenders. Deng was on the list. He had been sentenced to 15 years' imprisonment with three years' deprivation of civil rights after release, for slandering Chairman Mao on several occasions between 1967 and 1969. He is reported to have been sent to a labour camp. His present fate is unknown. 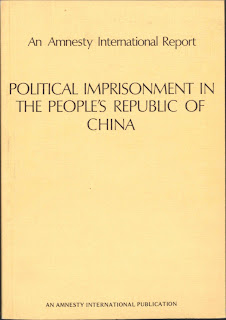 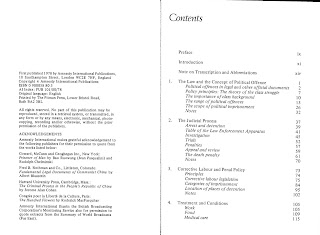 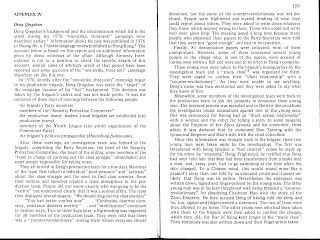