Refusal of visas for a party of Formosan Officials

As promised in my letter of 10 February, I have now looked into our refusal of visas to the party of Formosans about which you wrote to me on 8 February.
Mr. Lu and his colleagues were in fact all officials in the employ of the Formosan authorities. According to our records, five worked for the Taiwan Provincial Government and the other two were members of the Council for International Economic Co-operation and Development, which we understand is an organisation of the Nationalist Central Government.
We are as sympathetic as possibl to visa applications from Formosa and, within the limitations imposed on us by our recognition of Peking, we encourage commercial contacts. We certainly have no objection to visits by Formosan tourists or businessmen, or even by individual officials who wish to come here in a strictly private capacity. But, since we do not recognise the Nationalist regime, you will understand that our contacts with Formosan officials as such have to be kept to an absolute minimum, especially in this country. To have allowed a party of seven Nationalist officials to come here on what would have appeared to be an official visit would clearly have invited a protest and possible retaliation from Peking. Our exports to China in 1966 amounted to £32 million. There are unhappily many occasions when our choice does not lie between a right and a wrong course, but when we have to opt for that of two wrong courses which is likely to be least damaging. Ideally speaking it was wrong to refuse these people visas; but practically speaking it would have been wrong to incur the risk to which granting them would have laid us open. We therefore had to advise the Home Office to refuse them.
I am sending a copy of this letter to Michael Montague.
(A.J. de la Mare)

Mr. Denson
Refusal of visas for a party of Formosan officials

2.  Our Consulate in Tamsui first informed us of this proposed visit last September. As you will see from their letter of 20 September all seven of the party were Formosan officials, five from the Provincial Government and two from an organ of the Central Nation­alist Government. The party were on a tour of a number of countries to study industrial estate development.

3.  We have always vetted visa applications from Formosa sympathetically. Individual cases are decided on an ad hoc basis, the aim of our scrutiny being to ensure that our contacts with the Formosan authorities are kept to the bare minimum as is consistent with the fact that we do not recognise the Nationalist regime. (Our policy is set out in more detail in your letter of 3 February to Mr. Bray in Tamsui).

4. On a previous occasion when there was a possibility that a party of Formosan officials from the Chinese Petroleum Corporation might visit the United Kingdom in 1961 the Chinese Mission here protested vociferously and we subsequently refused the visas for the Formosans. If visas had been granted on the occasion we are now considering we might have been faced with a similar situation.

5.      Nevertheless in view of the fact that five of the seven officials concerned worked for the Provincial authorities (to whom H.M. Consul in Tamsui is accredited) we took the precaution of first asking our Consulate whether a refusal to grant visas in this case would cause them serious embarrassment. They replied that serious embarrassment was unlikely.

6.      We then advised the Home Office to refuse the visas. They subsequently informed us that the Home Secretary had agreed to this on the understanding that the Foreign Office would say that this decision had been taken on their advice if it were ever publicly queried.

7.   I submit a draft reply. I believe that Mr. Marsh maintains close connexions with the Free China Inform­ation Centre. I have therefore drafted the reply in fairly guarded terms. Mr. Marsh (and the Nationalists) know only too well that we have no intention of giving the Chinese Mission such obvious pretexts for protest­ing and that we do not intend to place our trade with China at risk (our exports came to £32 million in 1966) for the sake of allowing into the U.K., groups of officials of a regime not recognised by H.M.G. There is no need in my view to spell this out. 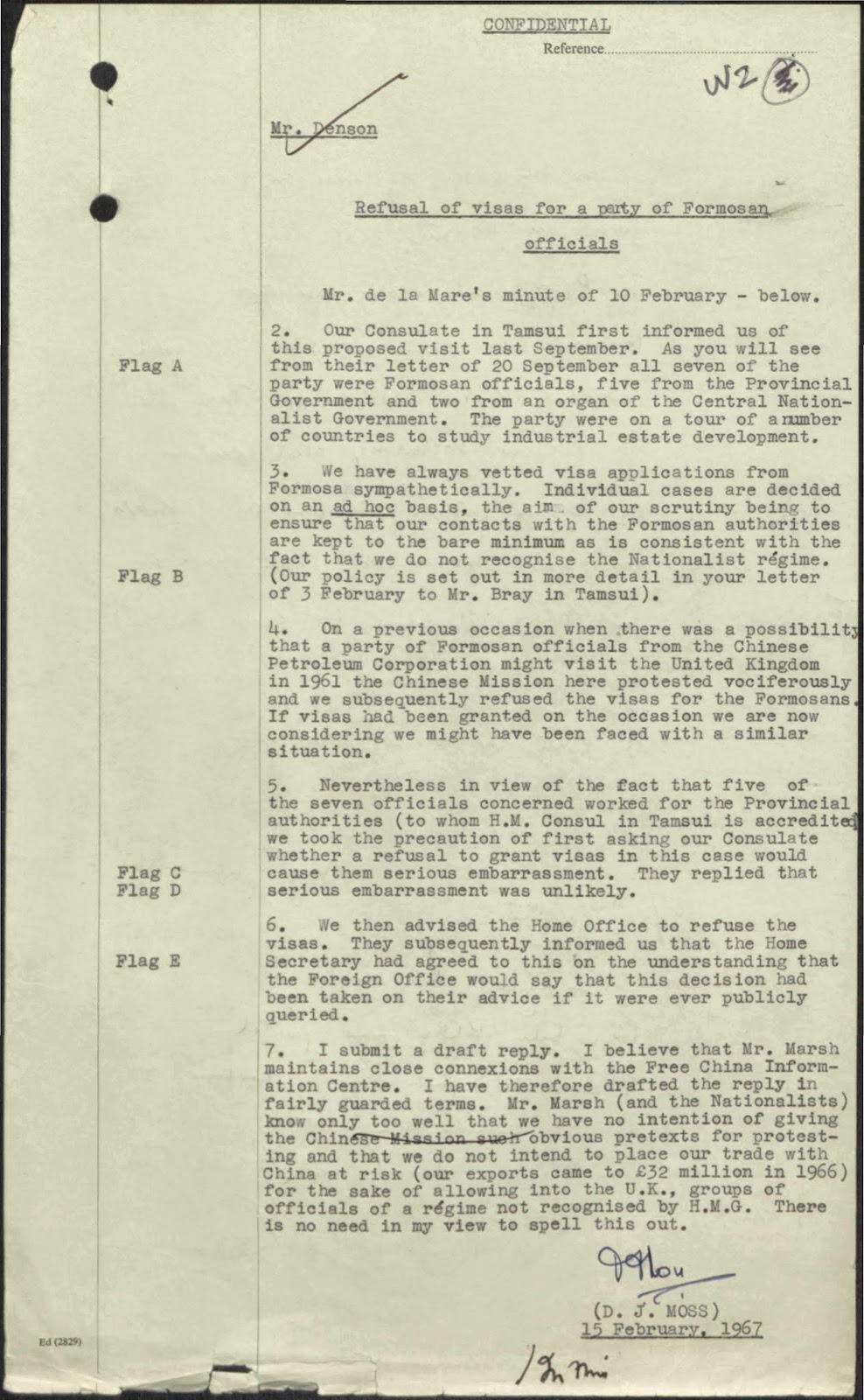 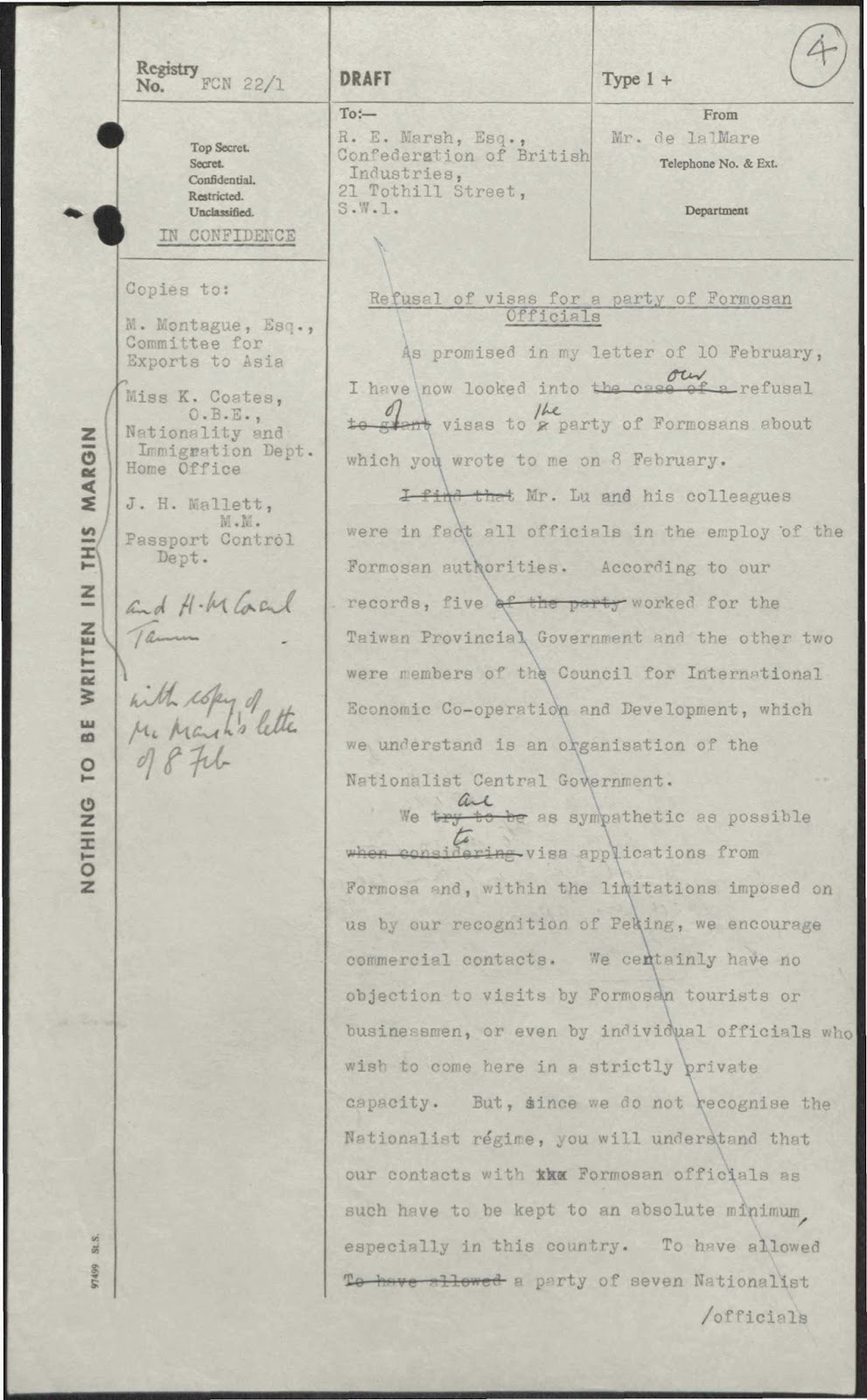