CONFIDENTIAL
Cypher/Cat.A
PEKING TO FOREIGN OFFICE
Telno. 180     10 February 1967
CONFIDENTIAL
Addressed to Foreign Office telegram No. 180 of 10 February. Repeated for information to Washington.
There are signs that the Chinese Ministry of Foreign Affairs may have been "taken over" by a revolutionary rebel committee.

2. The Danish Ambassador who was called to the Ministry on 6 February to see "some responsible members" of West European Department, found himself confronted by two men and a woman whom he had never seen before and who refused to disclose their identity. They ran the meeting as a sort of committee and were rather ruder than usual. I have it on good authority that the Mongolian Ambassador was asked to go to the Ministry to see “members of the Revolutionary Rebel Committee”. He declined the invitation which was repeated several times in pressing terms with veiled threats of the terrible consequences that would follow if he failed to appear, The Ambassador did not of course go. The Soviet Charge 'Affaires tells me that at his last meeting four or five days ago he saw his usual Vice-Minister who was accompanied by two unknown young men who repeatedly tried to intervene in discussions. They also refused to disclose their identity but he was informed at the end that they were “representatives of the masses”.

3. If I am asked to go to the Ministry explicitly to meet “revolutionary rebels” I propose to decline. If I am asked to go to meet “responsible members” of Western European Department and find when I get there some unknown persons, I propose to refuse to discuss matters with them until they at least disclose their identity. I hope you will approve of this line as a first reaction. If the Ministry inform us officially that it has been taken over by a "rebel committee" this would put the matter on a different footing. I expect most of my colleagues to take a similar attitude.

4. The Moroccan Ambassador has told me that he has it from a "very reliable source" that Ch'en Yi was paraded in a lorry but without dunce's cap some time last week. This on the face of it would seem unlikely as he was the guest of honour at the Ceylon National Day reception on 4 February. Nevertheless the two are not completely inconsistent in present circumstances. We know he is still under some criticism and there are reports that his son has been condemned to death, though reprieved subsequently. He could still be carrying out his official functions "under supervision". 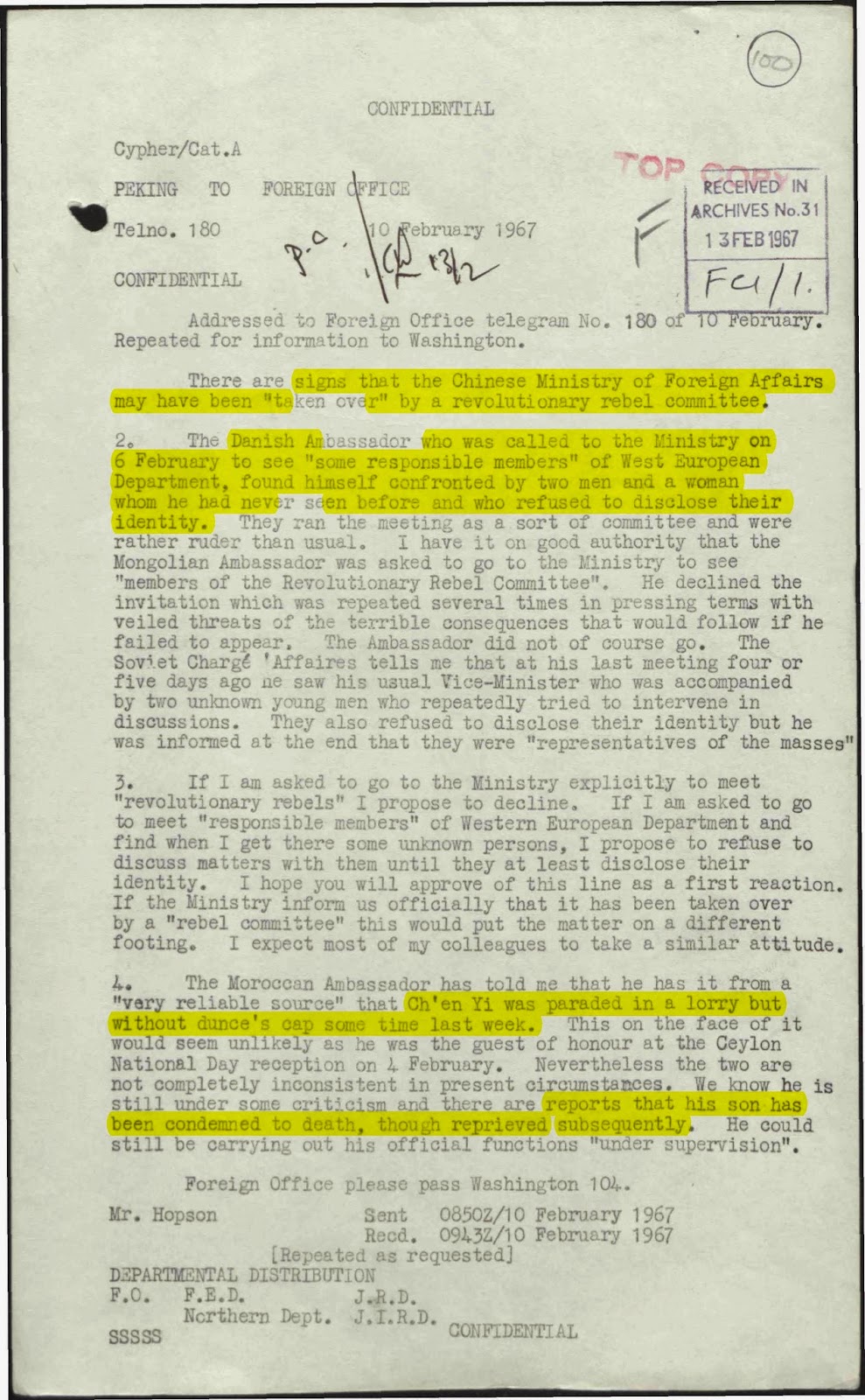