A new French Commercial Counsellor arrived here two weeks ago to replace the one who left China after an incident during the anti-French demonstrations at this time last year. The French Ambassador decided to introduce him himself at the Ministry of Foreign Trade and the China Council for the Promotion of International Trade, since he considered it a useful opportunity to have a high level discussion in each organisation.

2. The French told us that the Ambassador was received at the Ministry by Vice-Minister Lu Hsu-chang, who has been performing most of the public trade ministerial functions recently. The interview was pleasant and worth while though nothing very striking emerged from it.

3. At the C.C.P.I.T., however, things were very different. No obvious attempt had been made to clean up the building since its occupation by Red Guards last year and it smelt and looked as filthy as it has done for many months. The Ambassador would normally have expected to have been received by a Vice Chairman (in the old days it was nearly always Ho Tung): but on this occasion he was confronted with a man introduced as Wang Mao-shan, whom none of the French present had ever seen before and who knew nothing about France, trade or any subject appropriate to the occasion. M. Paye kept asking whether Mr. Wang was a Vice­Chairman, or what his position was, but received no more helpful answer than that he was “a responsible person of the Council”. Being somewhat piqued M. Paye insisted on referring to Wang sentence by sentence in the interview as “Monsieur le responsible” to the amusement of his escorting staff and the embarrassment of the Chinese interpreter.

4.  The French had asked to have a few words at the interview about the exhibition which they are planning for Peking (now postponed until early next year) and there was in fact a specialist on this subject present - the only Chinese out of whom they could get any sense. He was introduced as Mr. Wei, the "Director of Exhibitions Department". One of the French present recognised him as having been involved in the French exhibition of 1965, at which time he was no higher than sixth or seventh in the Department.

5. All in all it looks as if there has been a pretty good clear-out of staff in C.C.P.I.T.

I am copying this letter to Rogora in the Board of Trade, Miss Drayeott in I.R.D., and Brewer in J.R.D. 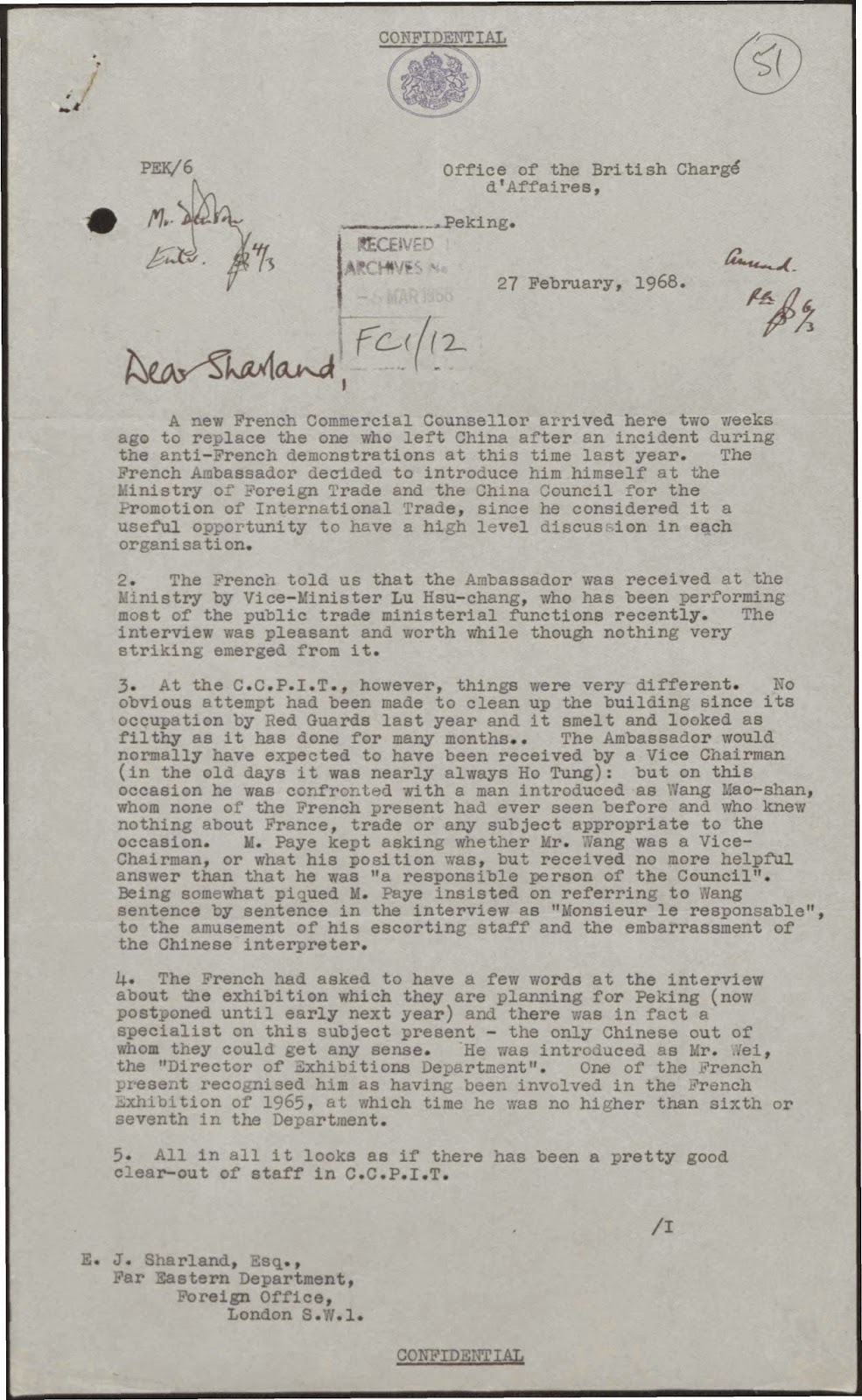