Office of the British
Chargé d’Affaires,
PEKING.
RESTRICTED
(1011/67)                                     1 February, 1967.
Dear David,
The supply of Red Guard newspapers is again on the increase, as you will observe from the collection enclosed in this week’s bag. This is a very welcome development, as they are a most valuable source of information on China and one which is in a number of ways better than Peking’s posters.

2.  Dealing with these newspapers does, however, put a considerable additional strain on our relatively slender resources. The first problem is translation. This is done entirely in Chancery as we have been reluctant to ask our remaining Chinese translator to help in the work and he is, in any case, fairly well occupied with other things. The result is that we make the translations very rapidly and selectively. The second, and possibly more serious bottleneck, is in typing and reproduction. Typistry has been under heavy pressure for months.

3.  In this situation we normally translate only selected extracts of what seem to us to be the most immediately useful items in the Red Guard newspapers. We are, however, conscious that some of the articles which are not translated or only briefly summarised, contain much material which would be useful for background or research purposes.

4.  Up to now we have sent you copies of the newspapers, assuming that if required you or Joint Research Department would arrange for further translations to be made and dis­tributed. It now occurs to us that it would, perhaps, be a better idea to send the first copies to Leslie Smith in Hong Kong, as he is likely to be much better equipped to cope with the work involved. It would be helpful if you and Leslie Smith, to whom I am copying this letter, would telegraph your comments so that if you do want us to make this change, we can do so without delay.

5.  Where we have two or more copies of a newspaper, we could, of course, send one both to London and Hong Kong. Generally speaking, however, we prefer to keep our spares for street corner trading with the Chinese or with other Missions. Photo­copying does not at present offer a very satisfactory alterna­tive because, as you will be all too well aware, the machine we have here produces rather poor copies of newspapers. This is something we are hoping to improve but it will take time.
6.  In addition to Leslie Smith, I am copying this letter to Colin Wilson in J.I.R.D., Frank Brewer in J.R.D. and Emrys Davies in Hong Kong.

Many thanks for your letter (1011/67) of 1 February about Red Guard newspapers. You will already have seen from the telegram I sent in reply that we think it an excellent idea for these newspapers to be processed by Leslie Smith providing that the translation facilities there can stand this Additional strain. I should perhaps add that we have already mentioned the possibility of making this arrangement to the Americans during the discussion we had with then here last week and they are naturally very anxious to lay their hands on as much Red Guard material as possible. I have made arrangements for photocopies of all the Red Guard newspapers we have so far received here to be sent to their Consulate in Hong Kong.

2. I find these newspapers fascinating reading. When they are easily available in Peking there is probably too much material for us to be able to work through quickly here but, if the supply ever drops off again, we might possibly re-think our arrangements and have the originals sent here so that we can make all possible use of their contents as soon as possible.

3. I very much sympathise with your translation and typing problems. Talking things over with John Boyd, who has now returned, only confirms how hard you must all be working. The results from our point of view are excellent. 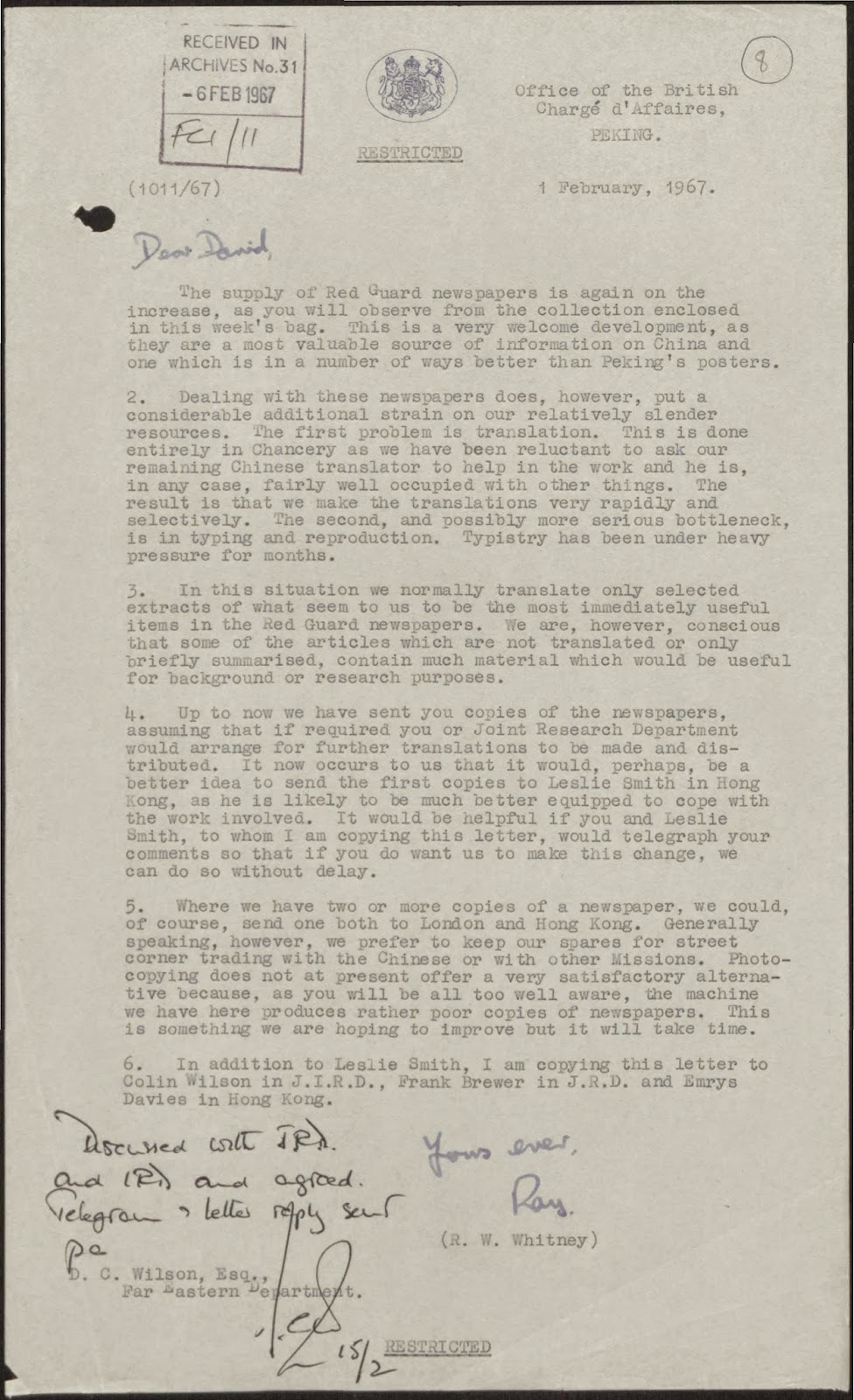 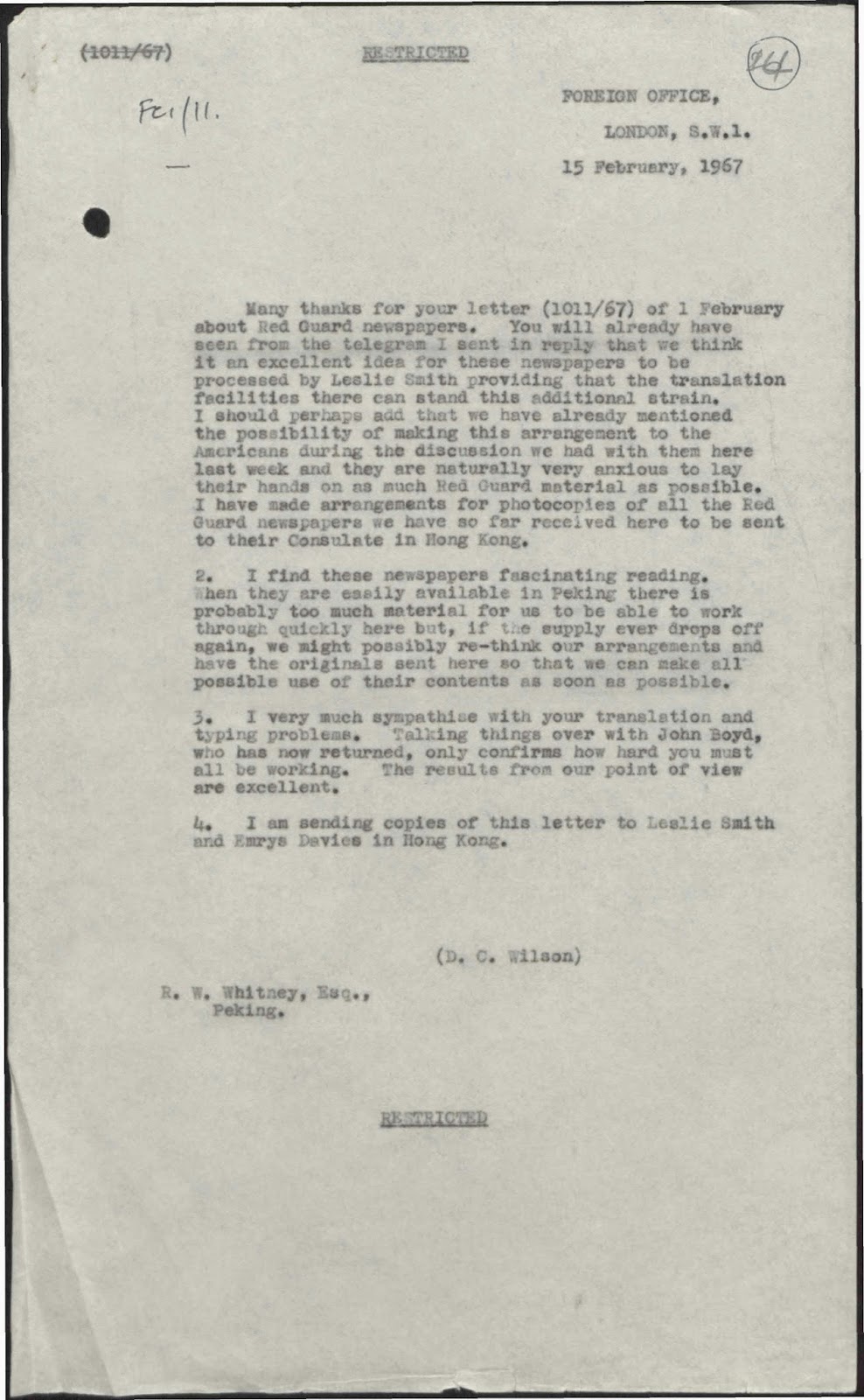