In the year 1967 trade between the Federal Republic and Communist China exceeded for the first time DM. 1,000 million and Germany thus become China’s main European trading partner. German exports to China amounted to approximately DM. 700 million and Chinese exports to Germany to about DK.400 million. The bulk of the German exports are made up of heavy machinery, copper, fertiliser, and steel pipes and the Chinese exports comprise foodstuffs, tobacco, silk, cotton and tin. The figures for 1968 are not yet available but the indications are that this volume of trade will be maintained.

2.      Foreign Minister Brandt has referred publicly on one or two occasions in the last few months to what he describes as "the positive development" of Germrny's commercial relations with China but he has sought to play down any suggestion that this stands in curious contrast to Germany's policy of "political restraint" towards Communist China. He has pointed out that German trade with China has a long and good tradition and that the Chinese for their part seem to be interested in keeping up a satisfactory trade and in reducing the adverse balance of trade that they have with Germany. Some months ago in Hamburg, referring to the possibility of concluding a trade agreement with China, he stated:
"We are often asked why we do not formalise trade relations with China. In our position it would have been unwise to risk dissensions with both world rowers and to bring disagreement with Japan. This should not exclude a possible later adjustment of our relations with China. But we will have to avoid inconveniencing our relations with other friendly nations."

3.  In the light of Germany’s developing trade relationship with China and Herr Brandt’s comments we recently took the opportunity to have a discussion with Dr Jungfleisch, deputy Head of the Foreign Office’s China Division, on Germany’s relations with Communist China. We asked whether there had ever been any formal commercial agreement with Peking and whether this was under consideration. Jungfleisch said that in 1957 the Federation of German Industry had concluded a commercial agreement with the corresponding Chinese organization but that it had only been of one year's duration and had not been renewed, because neither side had expressed any great interest in doing so:     it had not greatly    facilitated the development of trade.   German trade with China arose from the enterprise of a relatively small number of German firms who had long-standing ties with the area. There were occasional murmurings from smaller firms, who were anxious to get into the Chinese market and who lacked these historical ties, about the desirability of concluding some sort of consular/commercial agreement with Chine which would facilitate their operations. The Federal Government however always pointed out to these firms that success in dealings with China was governed less by formal agreements than by considerations of self-interest. If the latter were lacking, formal consular or commercial agreements,     in the experience of other countries which had these, were of  little value. Conversely if the Chinese wanted to trade they would make sure this was facilitated even if there was no form of official relations with the country concerned.

4. We then asked Jungfleisch what was the attitude of the German Government towards diplomatic recognition of Peking. Jungfleisch said that his Government's basic position was that German vital interests were not engaged in China but in Europe. The Germans sew it as essentially a responsibility of the United States to make the running in the matter of China’s relationship with the Western world. It was the United States which was most directly affected and which bore the chief responsibility for coping with any danger China might present to the west as a whole. It was not for Germany to interfere and complicate life for the United States. The German Government saw the problem in the perspective of the western alliance as a whole rather than in terms of German- Chinese bilateral relations, and he thought they would continue to do so.

5. An additional factor influencing the German Government, Jungfleisch said, was of course the division of Germany. As China was a divided country too, Bonn had to tread very care­fully in the Chinese question.

6. Jungfleisch then asked what the New Zealand attitude was and we explained that while we wished to encourage China to emerge from its self-imposed isolation we were adamant that this should not be at the expense of Taiwan. We regarded the latter as one of the success stories in Asia and as a country which was playing a useful role in regional associations in Asia. We did not think it would be in the Western interest for Taiwan to be isolated or deprived of its right to an acknowledged place in the international community. Jungfleisch indicated that he thought the German Government would be broadly in agreement with our assessment of the importance of Taiwan to the free world.

7. At this point we asked Jungfleisch how it came about that the Federal Republic did not have diplomatic relations with Nationalist China. He explained that up to 1949 Nationalist China had one or two consulates in Germany and a military mission. With the establishment of the Federal Republic in 1949 however these missions had been withdrawn and Chiang Kai Chek had taken the odd step of sending congratulations to Adenauer not directly but through a local Chinese association. The whole affair was clouded in oriental obscurity but it was Jungfleisch's guess that the withdrawal of a Nationalist Chinese presence from Germany in 1950 had something to do with Chiang’s personal attitude towards Germany. He had participated in several allied summit conferences in the course of the Second World War but had not been invited in the closing stages to discussions on Germany. Perhaps he was huffed; perhaps he was unhappy at any form of German state emerging. It was anyone's guess. Jungfleisch added nevertheless that the Federal Republic had over the years also developed good trading relations with Taiwan.

8. Finally we asked Jungfleisch whether in view of the recent Italian and Canadian moves he thought there was any possibility of the Federal Government coming to feel isolated within Western Europe and NATO in the matter of recognition of Peking. Jungfleisch laughed and said he did not think that was a consideration which would weigh very heavily with Germany. Certainly there was no such feeling at the moment. 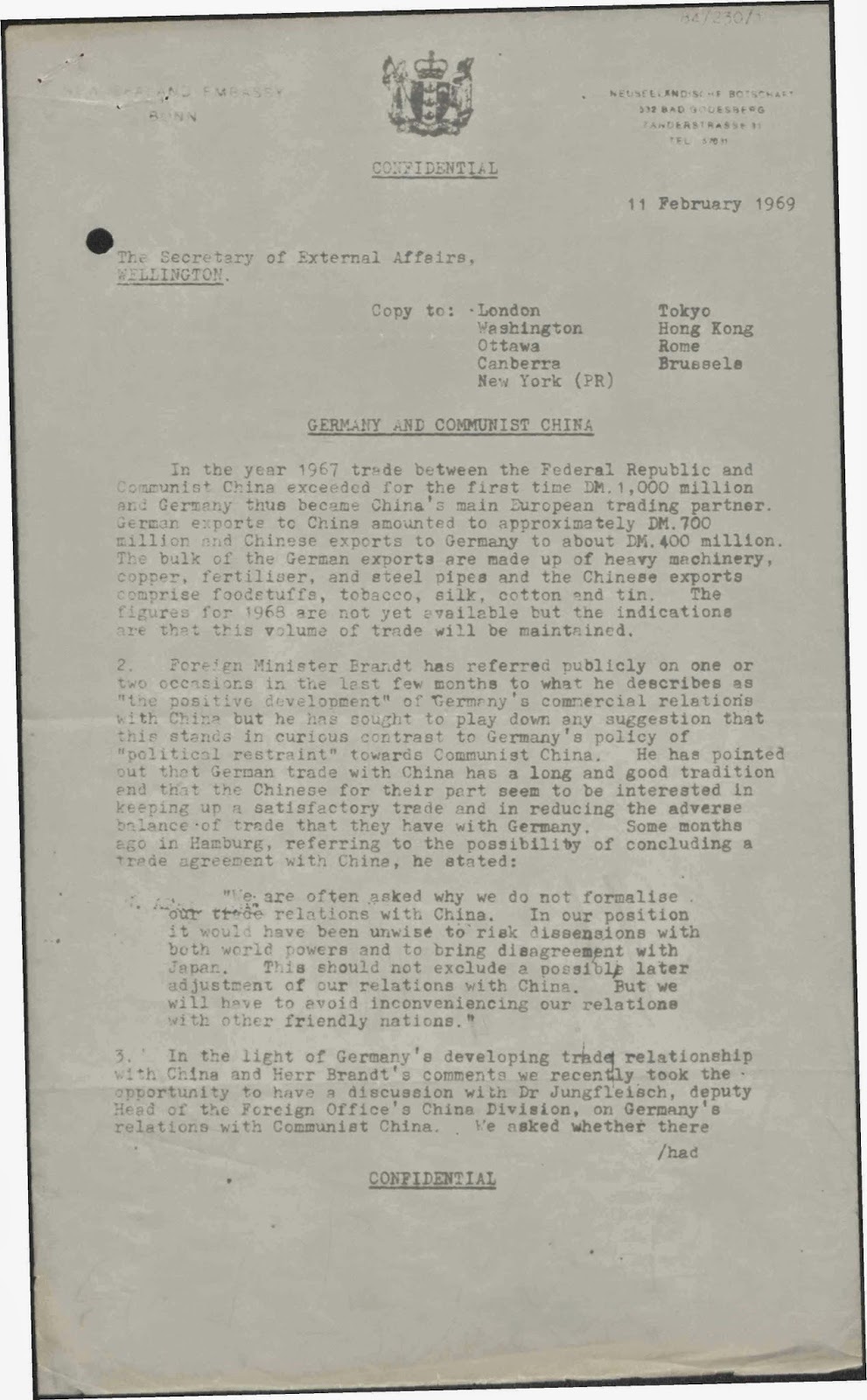