2.   As you know, the incident, which took place on 1 February, arose during a demonstration outside the French Embassy when the Richards tried to reach the office by car. The crowd would not let them through; Richard reversed, slightly brushing a stationary Chinese lorry; they were then more or less dragged out of the car; Richard was isolated on his way to the Embassy and Madame Richard was isolated on her way to the garage; they were kept surrounded for up to seven hours in a sub-zero temperature; were eventually extricated by a posse of troops who took them to the police station where they gave their depositions; and finally got back to bed 12 hours after the incident had started. Meanwhile the Ambassador had been called to the Foreign Ministry and been told that the Richards must make a public apology for injuring a number of the demonstrators (which was quite untrue) or take the conse­quences.

3.   The French decided to play this as quietly as possible. The Richards stayed at home and the French argued with the Ministry that if anything had happened at all it was a mere traffic incident and not a political or diplomatic question at all. It should therefore be dealt with in the normal way by the competent authorities for dealing with traffic incidents to whom the Richards had already made a statement. The French Counsellor was summoned to the Ministry on 4 February and asked why apologies had not been forthcoming. When he explained why, the Ministry officials said that if no apologies were forth­coming during the next week the French Embassy would have to take the consequences. The French then decided that the best thing would be to get the Richards out of China if possible. On 9 February they therefore applied for exit and re-entry visas for Richard and his family. On 10 February the Ministry telephoned to say that they wished to see Richard at the Ministry that evening. He therefore went, together with the Cultural Counsellor (who is a bit of a lawyer), and a French Chinese-speaker. When they arrived they were confronted with three nameless gentlemen who, one after another, accused Richard of creating a deliberate provocation, demanded apologies and compensation, etc., etc. Richard denied this and refused to make any apologies, taking the same line as previously that this was a traffic incident and should be dealt with by the competent authorities as such. After all three of the Chinese had said their piece, the first speaker then handed Richard his passport with an exit and re­entry visa in it, saying that the “matter was not yet closed”. The Richards left the next day without further ado.
4.   Considering that the Chinese Vice-Minister of Foreign Affairs had been officially reported in the Chinese press as requiring an apology from the Richards, this was a pretty remarkable climb-down on the part of the Chinese. We can only assume that the whole of the French business was in fact accidental, and that someone on high, either Chou En-lai or Ch’en Yi or both, decided that Franco-Chinese relations were too important to be jeopardised by a silly incident of this kind. The Foreign Ministry were therefore presumably instructed to get an apology if they could but if not, to let the Richards go quietly.
5.  The French are naturally delighted with the outcome and I think they may be congratulated for playing it so coolly. They say it has not yet been decided whether Richard himself will return to China. I suppose they will wait and see if the Chinese take any further action on the traffic incident, but it seems doubtful whether he will in fact come back, at any rate as long as this is hanging over his head. This would be a pity because he was an extremely helpful colleague and has done a first class job in promoting Franco-Chinese trade. Meanwhile, I think we can say that Franco-Chinese relations are back on an even keel.
I am sending a copy of this letter to Leslie Fielding in Paris.
Yours Donald
(D. C. Hopson)

You will have seen all the fuss about the incident in Paris involving Chinese students and the subsequent demon­strations against the French Embassy in Peking (my telegram No. 143 of 2 February).
2.  The nastiest incident took place on 1 February when the French Commercial Counsellor and his wife tried to reach their Embassy in their car while a demonstration was going on. They were unable to get through the crowd and in reversing slightly brushed a Chinese lorry. Children then started hitting the car with sticks so they got out and Mme. Richard removed a stick from one of the children. The crowd then became menacing and Richard tried to get to the Embassy on foot to seek assistance while Mme. Richard tried to drive the car to the nearby garage. They were then isolated and kept surrounded for several hours. Police arrived, but only enough to ensure their physical safety. Eventually a lorry-load of soldiers arrived who managed to clear a way for Mme. Richard who was taken to the police station, but it was another hour or so before Richard himself was extricated. He had been standing in the street on an extremely cold day for nearly seven hours.
3. While they were at the police station the French Ambassador was summoned to the Foreign Ministry to see Vice-Minister Lo Kuei-po who accused the Richards of deliberately provoking an incident and injuring several people in the process. (There seems to be no basis of truth for this at all.) The Ambassador protested in his turn and the Chinese then pro­duced two of the people who were supposed to have been injured in the incident. The Vice Minister demanded that the Richards should admit their mistake and apologise to the injured, "otherwise they would be held fully responsible for any out­come of the incident". Before the French Ambassador left (it was now after midnight) he was presented with a small demonstration by Red Guards at the Ministry. The Richards eventually got back from the police station at about 3 a.m. the next morning.
4. The French are taking this pretty calmly and seem disposed to leave it to the Chinese to make the next move. The French have naturally refused to admit responsibility or apologise. The Richards meanwhile are staying at home and spasmodic demonstrations continue in front of the French Embassy.
5. It is impossible to say at present what the outcome will be. If no apology is made the Chinese may decide to declare the Richards p.n.g. They might even give them the Jongejans treatment and, having declared them p.n.g., refuse to allow them to leave until an apology is forthcoming.
6. The French think, and I am inclined to agree, that the incident in Paris was probably caused by some over­ enthusiasm on the part of the Chinese students and was not deliberately instigated. The Chinese would, I think, have preferred to concentrate on the Russians as their target. However they have been caught up in their own propaganda machine. The fact that nothing happened in London would seem to bear this out. The result in any case must be a deterioration in Franco-Chinese relations, though how serious this will be and how long it will last it is impossible to say at present.

I am sending copies of this letter to Bernard Ledwidge in Paris and Nigel Trench in Washington. 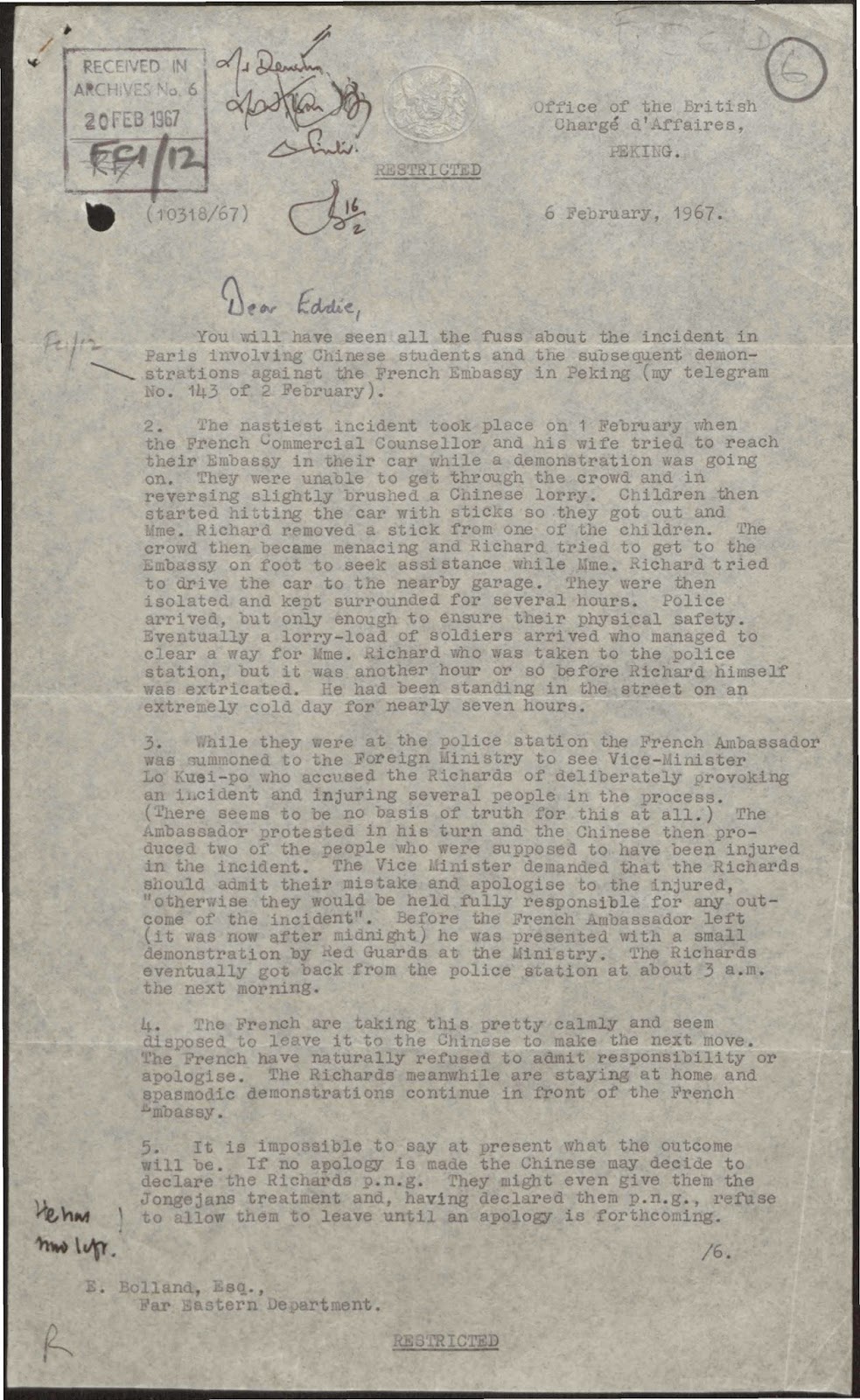 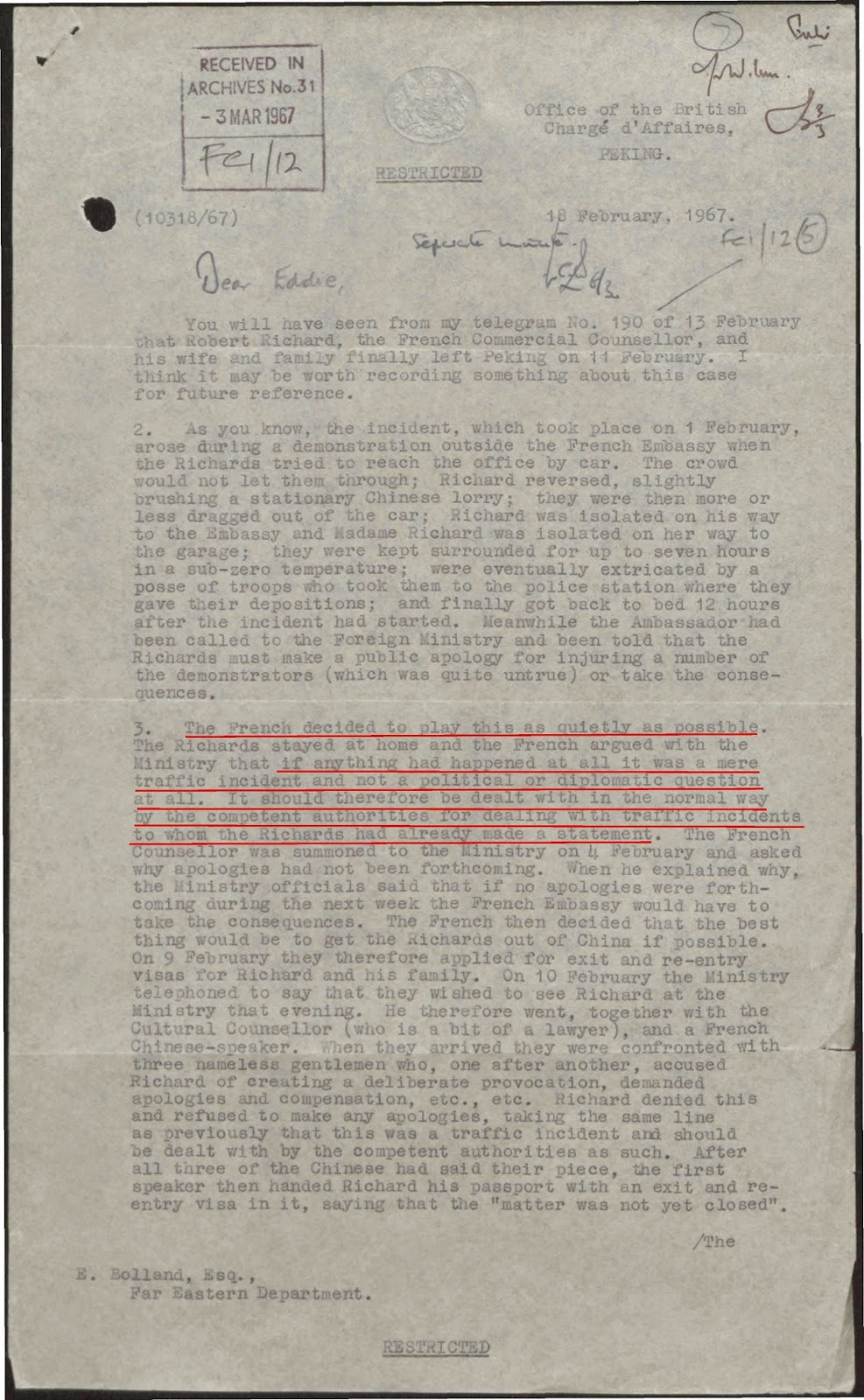