Dear John,
You will recall that when the wives and children of Soviet Embassy personnel in Peking left China in January 1967, the Chinese staged ugly demonstrations at Peking airport at the time of their departure.

2. During the last few weeks some of the Russian wives, but no children, have been allowed by the Soviet Government to return to Peking to spend a month or two with their husbands. The Soviet plane which arrived, some thirteen hours late, on Saturday, 6 April, carried two of them. According to reports from various colleagues, when the women got out of the plane they were treated to a hostile demonstration by about 500 uniformed revolutionaries from the Aviation Institute, who waved their red books at them and shouted such things as "Go home, revisionist bitches". The demonstration was orderly and there was no violence used either against the wives or the Russians who were at the airport to meet them.

3. A second story concerned with the airport is currently going the Peking rounds. The Czech Ambassador here, Mr. Kristek, intended to return to Prague for a short visit and proposed to leave on the Aeroflot plane I referred to in paragraph 2 when it left on 7 April. The Chinese told him that the plane was fully booked. The Ambassador replied that in that case he would take over the seat of one of the two Czech diplomatic couriers who already had reservations for the flight. The Chinese said they could not agree to this as there was a waiting list of thirty would-be passengers who must have priority over the Ambassador. According to one embellishment of the story, Aeroflot then stepped into the picture and said that if that were the position they would lay on a larger plane which could take the thirty extra passengers. Whatever may be the truth of this last part of the saga, the fact remains that in the end the Ambassador did manage to leave on 7 April but only after some bitter exchanger which could have done no good for Sino-Czech relations.

4. Taken by themselves one cannot read too much into these incidents. They may conceivably be the work of a few revolution­aries at Peking airport or in CAAC, the Chinese airline company. It seems more likely, however, that they are a manifestation of a slight resurgence of revolutionary pressures in foreign affairs circles which has been noted in our letter (sent under this reference today) reporting the attacks on Ch'en Yi.
I am copying this letter to Colin Wilson in IRD, Frank Brewer in JRD, George Walden in Hong Kong and to Chanceries at Moscow, Prague and Washington.
Yours ever
Ray
(R.W. Whitney)
J.D. I . Boyd. Esq.,
Far Eastern Department. 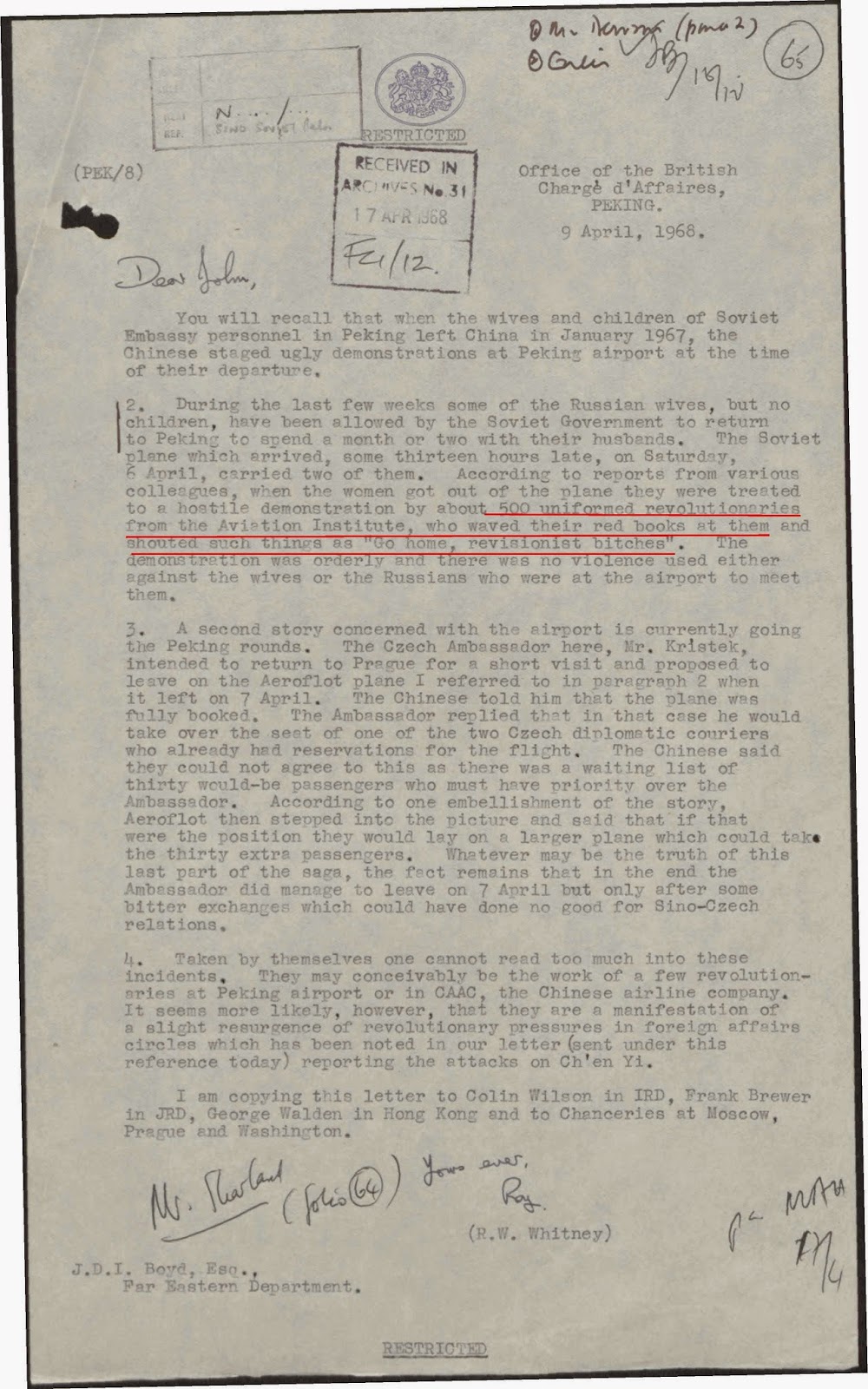