The following are some illustrations promised in my telegram No. 259 of 22 April of ways in which the Chinese discriminate against this Mission.

Travel and visits
2. We are very much at the bottom of the league as regards travel in China and visits to places of interest. In this we contrast not only with countries such as Pakistan and Rumania but with other Western European countries. The request made last year, and repeated when I called on the Acting Head of Protocol, to visit places in the Peking area such as communes and factories has still not been met. The only place we have so far been able to visit outside Peking, and this only for strictly consular reasons (with the sole exception of taking delivery of a motor-car) is Tientsin (other Missions are able to go there freely for recreational purposes). We still await a reply from the Ministry of Foreign Affairs about our request that David Laughton be allowed to visit Canton; we have at the same time asked that he see factories etc. in the Shanghai area. This is something of a test case. My recollection is that the Chinese in London rarely ask to travel. You will no doubt let us know if any applications are made and how you respond.

Relations with the police etc.
3. There is no doubt that members of this Mission are dealt with more stringently than those of a number of other missions. Thus in cases of motor accidents it appears that if a member of a "friendly” mission is concerned the Chinese are quick in dealing with their enquiries and in settling the matter so that the individual concerned can resume driving. This is not so in our case. Roger Garside had an accident in January and still has not been permitted to drive again. This same stringency appears to affect the Chinese attitude to our taking photographs. The Chinese are undoubtedly sensitive whoever is involved but in cases involving members of this Mission we get the impression that they confiscate the films in a way that is not done with other missions.

Relations with the Diplomatic Services Bureau
4. In peking the principal requirements of diplomatic missions in terms of labour, materials, services and so on are dealt with by the Diplomatic Services Bureau (D.S.B.) of the Peking Municipality. The degree of helpfulness of the Bureau directly reflects the Chinese Government's attitude to the country concerned. It is clear that in the matters itemised below we are dealt with in a much less sympathetic way than nearly every other mission.

(a) Accommodation
The D.S.B. have been extremely tardy in dealing with any requests from us for assistance. They have for example taken the radiators out of the former Commercial Counsellor's flat and these have never been returned. It invariably takes a long time to get extra workmen from the D.S.B. (eight months in fact to get a team of painters to re-decorate the staircases in the staff flats and remove some of the offending slogans - my telegram under reference).

(b) The Mission
We can only do the most routine work in the Mission without securing the approval of the D.S.B. If we try to proceed without it, our staff will not work. Thus it took us well over a month to get D.S.B. concurrence in the transfer of a grille from the old office to the present building even though in our view this permission was not needed according to the terms of the lease.

(c) Local Staff
Three of the most experienced and longest-serving members of our local staff have left us without notice clearly on instructions from the Chinese no doubt for re-education. The replacements sent have in all cases been far less efficient and co-operative. The clerk in the Tientsin office retired (probably under pressure) and no replacement has been provided despite several requests. We are as a result unable to send our lorry to Hsinkang to collect consignments from the docks since the Chinese authorities will not clear them for delivery in this way. Despite regular reminders we often wait months for a consignment to be delivered in Peking, a distance of 80 miles.

(d) Servants
It is clear that this Mission - and possibly the Indians - are the most shabbily treated as far as the provision of servants goes. When officers leave existing servants are removed, there is a delay in sending replacements and these are in most cases raw and less amenable than their predecessors. Of the total complement of servants employed by Donald Hopson and Percy Cradock, I have retained only the services of one amah despite representations by Cradock and by me on arrival. The replacements sent speak hardly a word of any foreign language and in the case of the houseboys have virtually no previous experience.

5. This letter is not intended merely as a catalogue of woes. Many of the difficulties we face can be and are surmounted by patience and perseverance. It is intended to show the gradations of pettiness of which the Chinese are capable and the extent to which the British Mission is still the "poor relation" compared with nearly all others. In saying therefore, as we do, that "relations have improved", I think there would be no harm from time to time in telling anyone interested, in particular sympathisers with China that all is yet far from normal both as regards British subjects and the treatment of the Mission.

I am sending a copy of this letter to Mark Russell in Personnel (operations) Department.

Yours ever
John
(J.B. Denson)

Slogans on the British Mission and Flats
6.  The slogans on the outside walls, entrances, doors and staircases of the flats were painted (and papered) during demonstrations in the Wai Chiao Ta Lou compound during the third week in May, 1967.
The posters and slogans on all the outside walls of the old Chancery and the former Residence were put up during demonstrations in the first weeks of June, 1967.
Our records do not show what if any representations were made at the time to the    Chinese for the slogans to be removed.

Mission
7. Last September, 1968 we received a circular note from the Peking Revolutionary Committee notifying us that all official buildings should be cleaned for the National Day. We replied through the D.S.B. that we had no objection to our walls being cleaned and would even be prepared to help. The walls facing Kuang Hua Lu were then cleaned (without any help from us) in the last week of September. The side walls facing the approach road to the Indian Embassy were not cleaned and still carry the slogans and remains of the posters.

Flats
8. At the end of February, 1969 eight months after our first request, the D.S.B. provided us with a team of painters who are now engaged in re-decorating the staircases in the flats and are removing all slogans from doors and walls inside. When this priority work is completed we shall endeavour to get them to clean up the outside, although this will be difficult work as the painted slogans are on concrete and, in some cases, have embedded themselves in the pebble-dash. 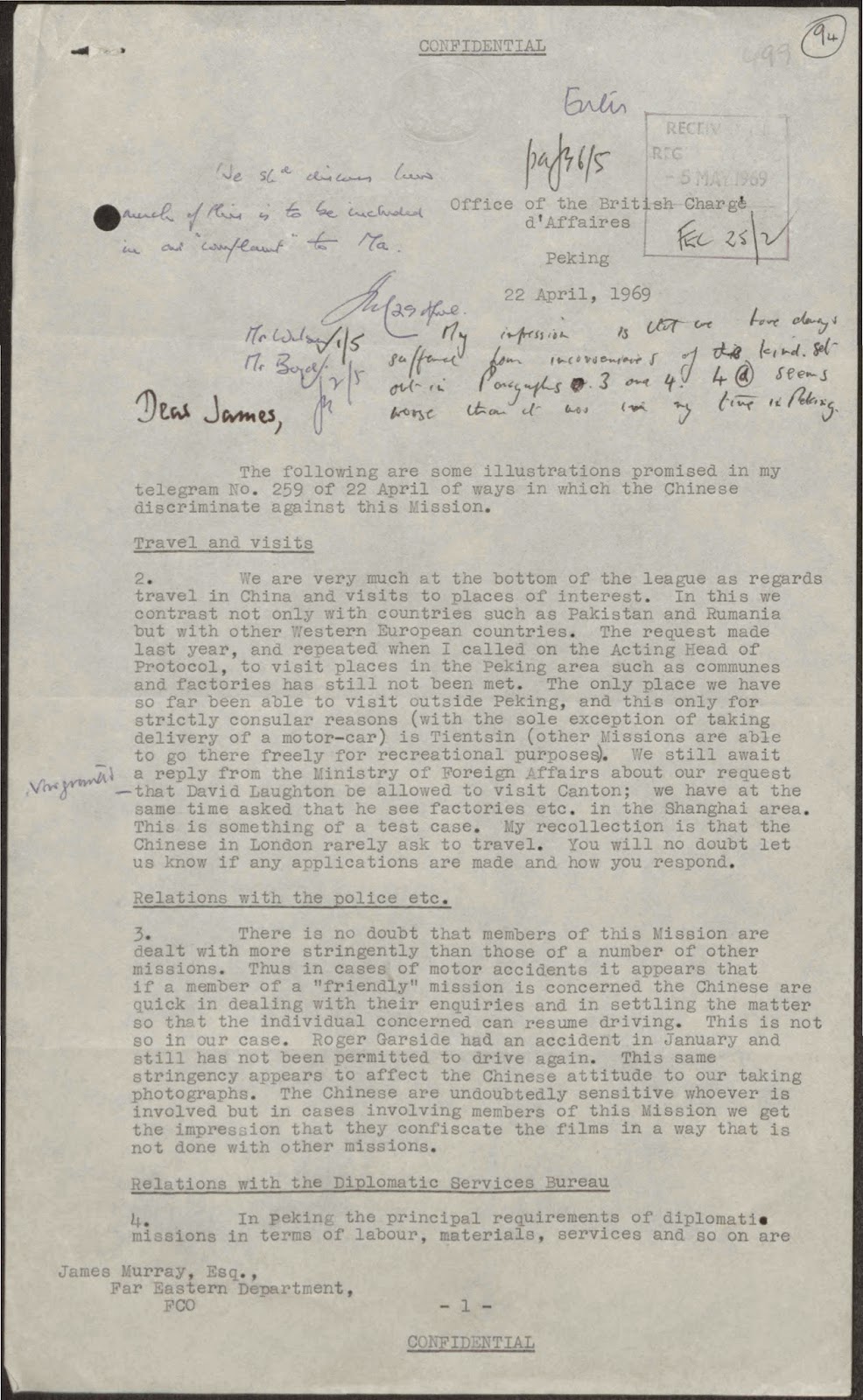 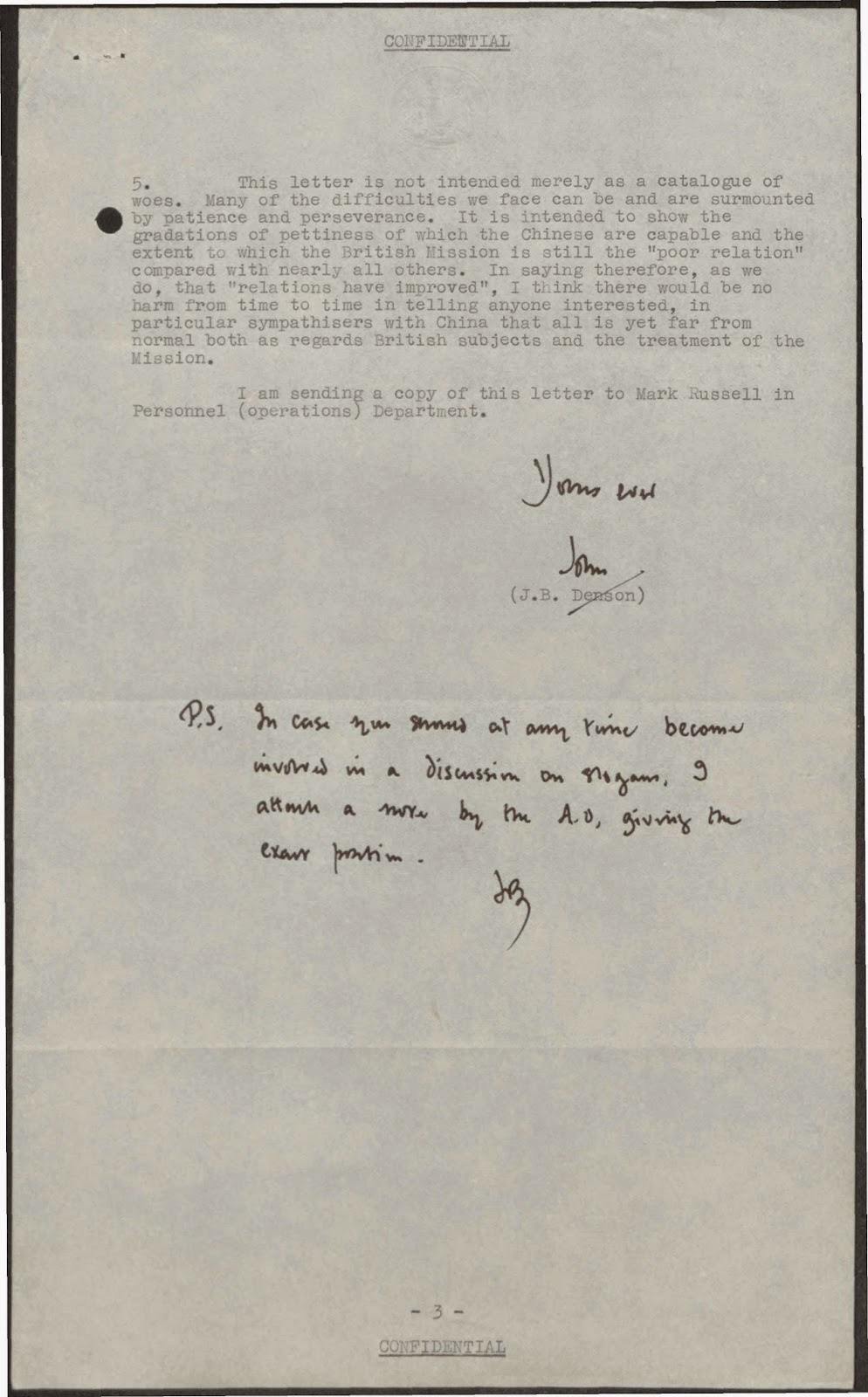