Summary of Information Received from Travellers at Lowu

General Situation - Kwangtung Province
The Spring Festival holiday having finished, the Canton authorities are now preparing to move a further large batch of residents to the countryside. Neighbourhood associations and production units are once again enrolling potential assignees in readiness for the exodus which is to start in April. Middle school authorities are understood to have been instructed to investigate the backgrounds of their pupils with a view to deciding which ones will be permitted to continue with their studies. Those students who are rejected will be assigned to the communes with the exception of a few who will be permitted to work in the city's factories. The Kwangtung Provincial Revolutionary Committee is reported to have asked factory managements to indicate whether or not they have vacancies which could be filled by the young people.

2. The prospect of being sent away from Canton is regarded with dismay by many; according to one traveller drivers of the water taxis which operate in the Pearl River staged a "go-slow" after they had been informed that many of them would be assigned to other areas.

3. There were reports of continued propaganda regarding the 9th Party Congress. Public address systems and youthful propaganda teams constantly remind the populace to be ready to celebrate the Congress. On the 4th and 5th March, however, public interest was switched to the 2nd March incident on the Sino-Soviet border. Loud­speakers relayed a People’s Daily and Liberation Army Daily editorial on the subject, protest banners and posters appeared all over Canton, and mass rallies and demonstrations were attended by students, workers, and members of the P.L.A. According to one arrival all Canton schools and factories were to close on the 6th March to enable the maximum number of people to partake in a final protest rally.

4.  Despite the tightening of public security precautions during the Spring Festival petty crime has flourished. Bus operators are reported to have complained of delays to their schedules through having to report cases of theft on their vehicles. Members of the Workers' Provost Corps are now riding the buses in plain clothes in the hope of catching criminals red-handed. It is understood that many of the latter are students who have absconded from their assignments in the communes and who, having neither money nor documents, are forced to prey on the public.

5. An arrival interviewed on the 2nd March remarked that "during the past few days” many young P.L.A. recruits had been seen awaiting entrainment at Taishatau Railway Station, the main Canton railway terminus. Several travellers returning from the counties spoke of local celebrations held to mark the departure of P.L.A. recruits. There were indications that the recruiting campaign has gone well, many youths were only too anxious to escape from the hard work and drab life of the communes to the comparatively good conditions in the armed services.

6. From Panyu and Paoan counties came reports that strict precautions were being taken to prevent the escape of youthful assignees from the communes to either Canton or Hong Kong. The recent escape of sixteen such assignees from a commune in Kaoyao County, on the other hand, brought no action on the part of the local authorities, who are said to be confident that the absconders will be forced by circumstance to return of their own accord. The Revolutionary Committee in another Kaoyao commune is stated to be most anxious to preserve good relations between commune members and the newcomers. In an attempt to improve relations between local fanners and newly-arrived students and cadres, the former have been ordered to assist with the building of extra accommodation. In a commune in Huahsien County, where the new commune supply system has just been introduced, all schools have been closed so that the buildings may be used to house newcomers from Canton and other areas.

7. The recent introduction of the commune supply system has also been reported from communes in Huahsien, Paoan, and Chungshan counties. In the latter two counties a proportion of privately owned land which had earlier reverted to commune control, has now been returned to local farmers for the breeding of livestock and poultry. Similar action to return a proportion of land to private ownership resulted after bitter protests from farmers in a commune in Kaoyao County. A shortage of food was reported from a commune in Chaoyang County where fish and edible oil were almost unobtainable, the local authorities are understood to have imposed a strict control on pork supplies and commune members may only buy one catty per person each fortnight.

8. Spring planting has started in some counties but operations have been hampered by the recent spell of cold weather and by an acute shortage of artificial fertilizer.

9. An arrival interviewed on the 1st March remarked that during his recent stay in Canton he had been under constant surveillance from members of the Workers' Provost Corps. The latter had visited him several times to check his documents and to question him closely on his movements.

10. A traveller who had visited relatives in Panyu County remarked that he had been required by the local commune authorities to undergo "thought reform" for a period of four days. Commune authorities in Paoan and Huitung counties are understood to have, invited Hong Kong visitors to remain in China to work for the Motherland, in both cases the suggestions were rejected. 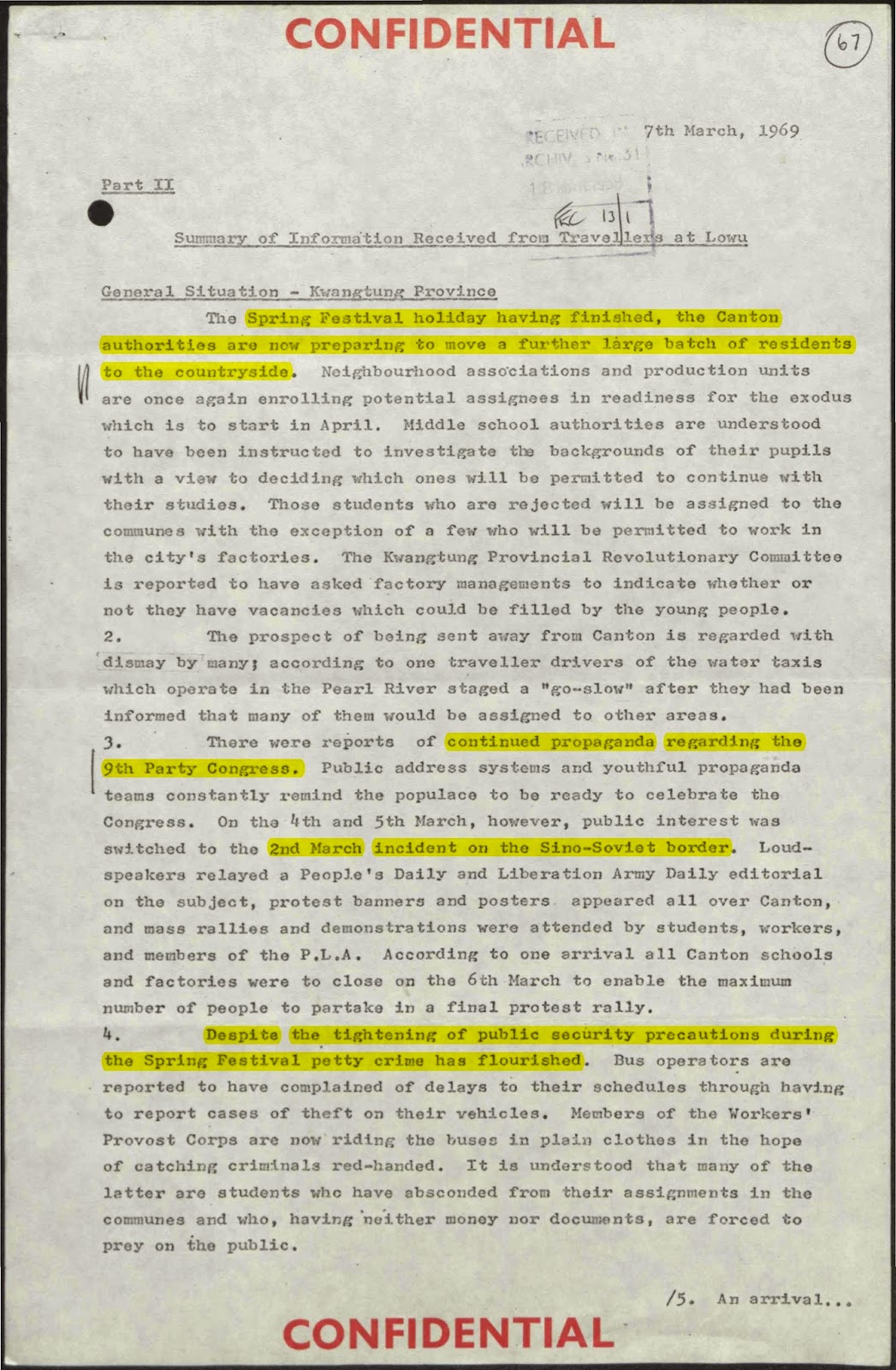 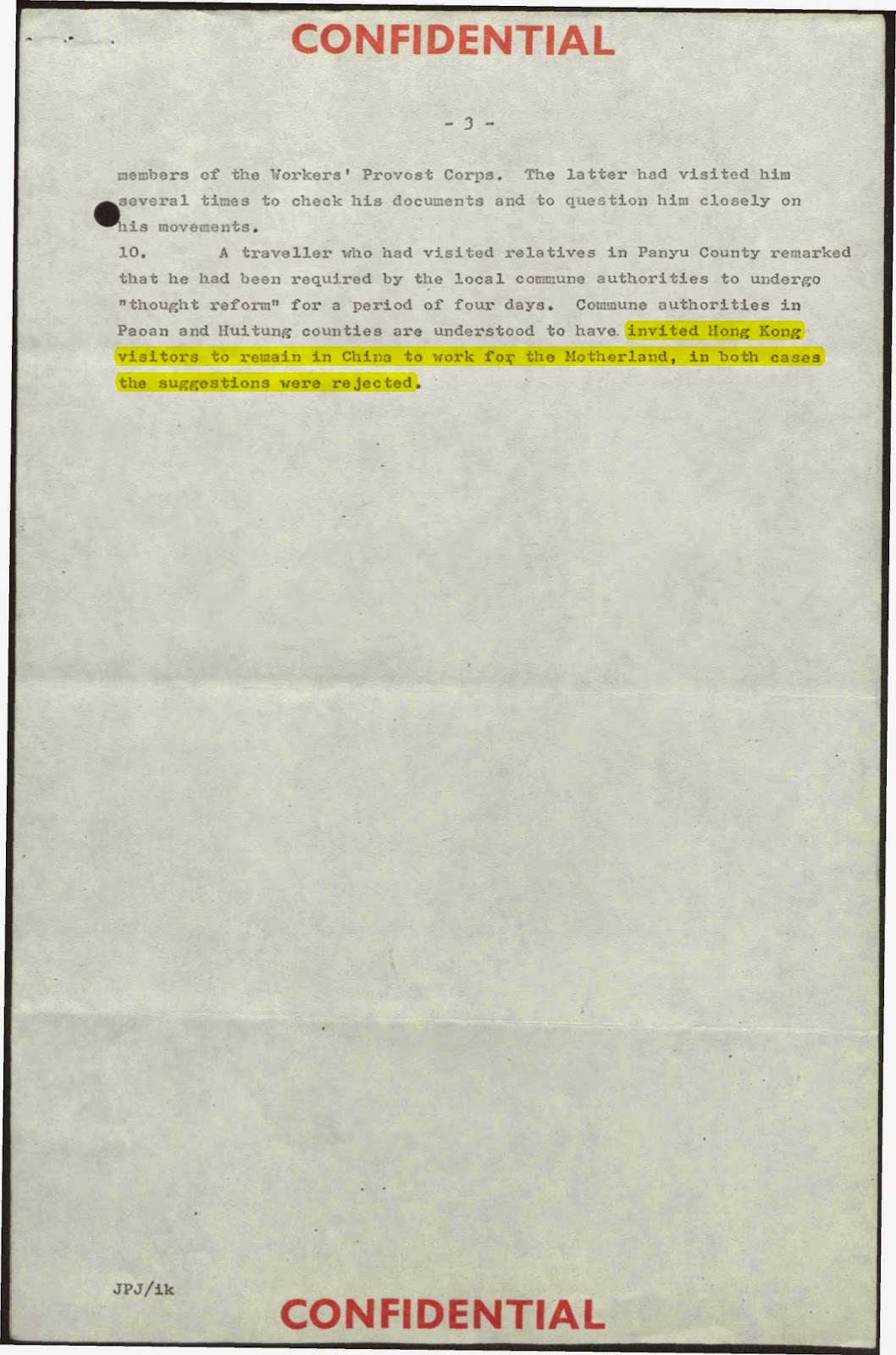