The Cuban Embassy in London have approached us with the request that we grant formal recognition to Mr. Pablo Ferrer as the new Cuban Consul in Hong Kong. I gather that Mr. Ferrer was gazetted on 17 January (Hong Kong Savingram No. 62 of that date).

2. We know, of course, that the Cuban Consulate in Hong Kong is of long standing, probably of pre-Castro vintage. But our records do not satisfy our urge to know why there should be such a Consulate. On the face of it, it is incongruous that while harbouring such strong feelings about even short visits by other communist officials we should accept the permanent presence of a Cuban. Is this just one of those "problems left over by history" that we have decided to live with? And does the Cuban in fact give any ground for anxiety locally? We should be grateful if you could bring us up to date. Meanwhile we are sitting on Mr. Ferrer’s credentials.

I am not surprised that you are puzzled by the existence of a Cuban Consul here (your letter TXA 3/368/2 of 24th March). I have always thought it rather odd myself.

2. The post war Cuban consular presence dates from 1945, when a Cuban Consular Agency was opened with a local businessman, who also acted as Consul for Ecuador, in charge on an honorary basis. This situation lasted until 1948 when the Consular Agency was closed. There was then no Cuban representation in Hong Kong until 1957 when, following the visit of a good-will mission headed by an Ambassador-at-large with the engaging name of Dr. Santiago Claret, a career officer was appointed to be resident in Hong Kong as Consul General and to act concurrently as Cuban Charge d'Affaires in Taipei.

3. This gentleman, Dr. Miguel Campos was left undisturbed when Castro came to power at the beginning of 1959, though he must have been deprived of his accreditation to Taiwan. He left Hong Kong on promotion in August 1959 and the office remained closed until December of that year, the archives being left in the custody of the Brazilian Consulate General. In December an elderly lady member of the Cuban Consular Service, Senora Sofia Dihigo, arrived to take charge and she remained until 1965, when a Cuban Chinese who had been the number two since 1962 took over. He remained until late 1967 when Ferrer's predecessor, Roldan Barranco arrived (from the Cuban Embassy in Peking!).

4. I suppose that our best opportunity to get rid of the Consulate would have been in mid-1959 when it was closed pending the arrival of Senora Dihigo. But, as far as I can determine from the file, the possibility was not considered at that time, no doubt because Castro was then still in his formative period. Nor, so far as I can discover, has any serious consideration been given to closing the Consulate since then.

5. The fact is that the Cuban Consulate has given us very little trouble over the years. Senora Dihigo was a charming lady who was, I believe, genuinely popular, and her successors have behaved correctly and kept themselves fairly inconspicuous. Whether there is enough work to justify a consular post I do not know. Roldan Barranco told me some time ago that he had quite a lot of shipping and commercial work but he did not strike me as being particularly busy. There is no evidence that the Cubans have ever attempted to engage in intelligence activities.

6. The answer to your question, then, is that the Cuban Consulate is here because it is here. I agree with you that its existence is incongruous and inconsistent with our general policy but there are no strong local grounds for not letting sleeping dogs lie.

7. Mr. Pablo Ferrer was accorded provisional recognition on 17th January. If you agree with the above you will no doubt authorise us in due course to give him formal recognition.

8. I am copying this letter, together with a copy of yours of 24th March, to James Allan in Peking. 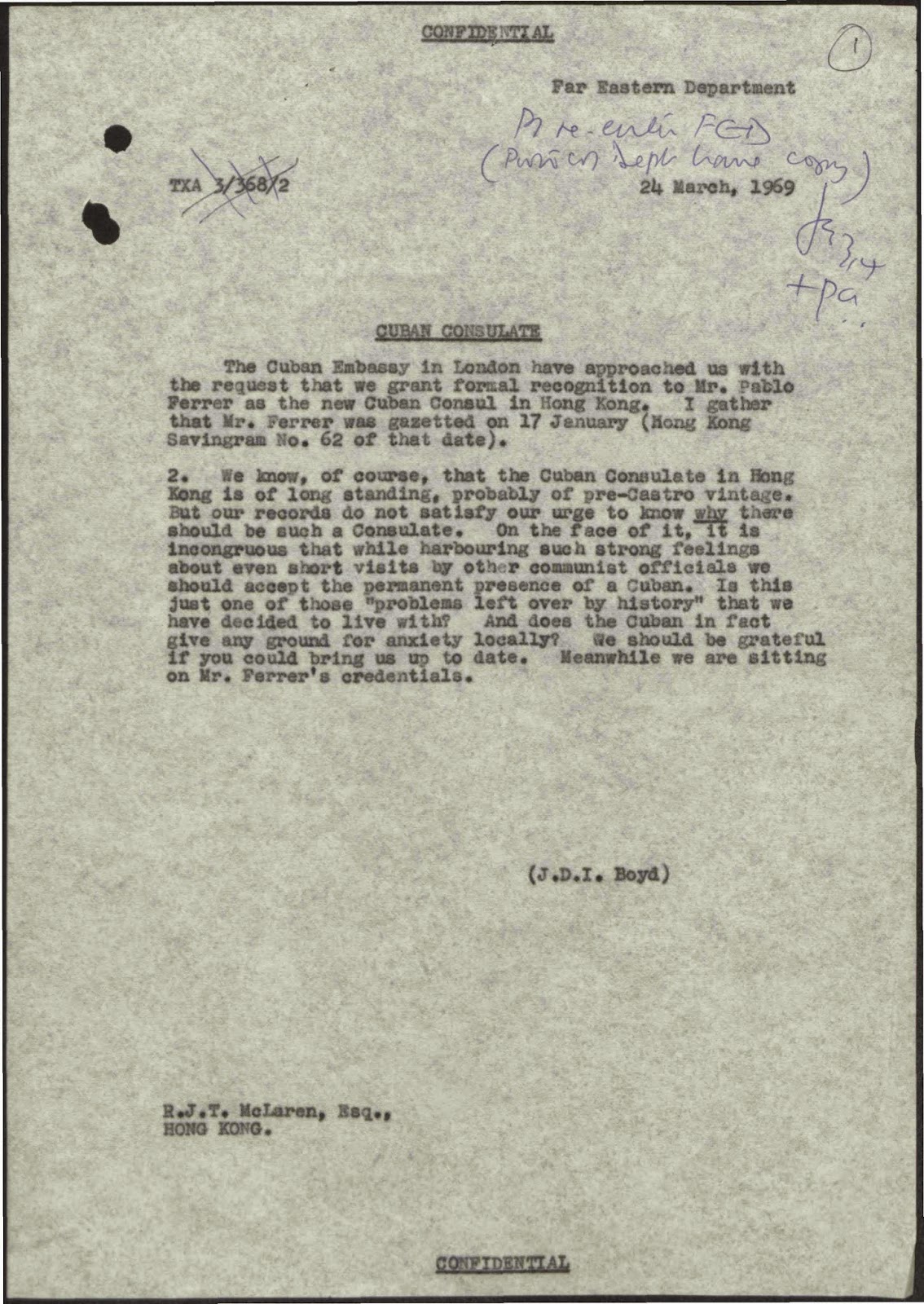 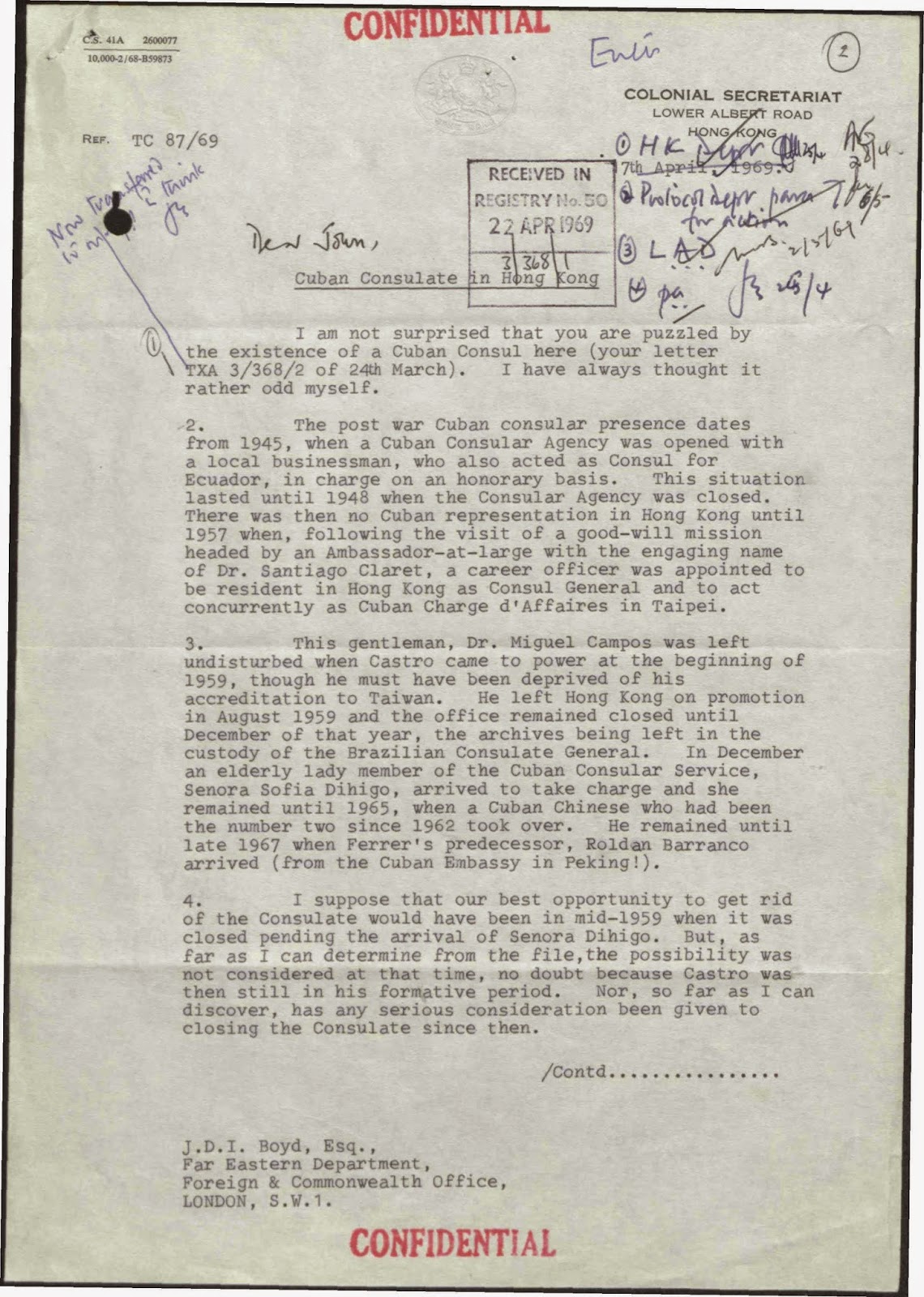