RESTRICTED
(1018/66)                                            The Office of the
British Chargé
d'Affaires,
PEKING.
15 November, 1966.
Dear David,
I attach a report of the posters which I was able to see on a recent visit to Canton. Some of the items are of particular interest, (especially Item 1), but in the haste to catch the Scandinavian Bag I must withhold any detailed comment on them. My impression was that big-character poster warfare had not been waged in Canton on anything like the scale of Peking, but that more posters were now beginning to appear (vide Item 5).

3. I am copying this letter to Emrys Davies in Hong Kong (with four copies of the enclosure), Tozer (D.I.S.), Brewer (J.R.D.) and Clift (I.R.D.).
Yours ever
Ray
(R. W. Whitney).
D. C. Wilson, Esq..,
PAR EASTERN DEPARTMENT,
Foreign Office.
RESTRICTED
____________________________________________________
RESTRICTED
Big-Character Posters - CANTON
11-14 November, 1966.
1.     Mao In a Minority?
An undated, although obviously very recent, poster (which was attracting considerable attention) gave an account by students from the Mining and Metallurgical Institutes in Peking of an interview held in Peking on 18 October with a representative of the Cultural Revolution Group. The third character of the name of this representative was difficult to read, but it was almost certainly Chang Han-wen (1728-3352-2429). (Our records show Chang to have been a Hopeh delegate to the Third N.P.C.) The discussion was conducted on a question-and-answer basis. The gist was as follows:-
Q. What is your attitude to the two groups of Red Guards?
A. They are both revolutionary.
Q. Has Ch'en Po-ta said something on the subject of revisionist Red Guards?
A. No, nothing. In any case you would not understand his accent. But Wang Li (3769-0500) has warned about the dangers of struggles between students. You should not struggle against your fellow students but against the people behind the scenes who are misleading them.
Q. What about the question of Liu Shao-ch'i?
A. Was not this settled at the 11th Plenum? It is necessary to rely on the masses. To have that sort of man as Chairman, is it not like sitting on a time-bomb? (Yu jenmo jen chu hsi bu shih hsiang ting shih cha tan?)有这么人主席不是像定时炸弹？”But these problems are not as serious as those of P'eng.
Q. People say that Mao is in a minority in the Central Committee.
A. Nothing of the kind!
Q. Chiang Ch'ing said she was prepared not to eat (吃不上饭)or to go to jail（坐牢）, but would still resolutely support the minority party (p'ai).
A. What Chiang Ch'ing said was that she would resolutely support the revolutionary party,
Q. People say that Mao and Lin are in the minority party.
A. Who says so? People keep saying this, and I keep asking them to tell me who says this.
Q. Who changed the slogans in today's rally? (See Item 4 of Peking posters 25 October- 8 November, 1966.)
A, I don't know. No doubt it was the responsible official in the Propaganda Department. We are following up this matter.
Q, what about the royalist party (pao huang p'ai)?
A. I have already said enough on that.
Q. Where have the royalist party got to?
A. (The writer of the poster here inserted a note in brackets explaining that Chang now became angry.) I do not wish to say any more about this.

2. Wang Jen-chung (3769-0117-6850)
Wang Jen-chung, who is reported in a poster to be the First Secretary of the Central South Region and Hopeh Province, is attacked for an examination he has conducted into the progress of the Cultural Revolution in the Central South Region. The examination is said to have begun on 20 October, when Wang started by taking a critical attitude to manifestations of bourgeois line which he discovered, but after three days he visited Peking, and when he returned his attitude "turned through 180° " and his final report defended and justified those in power taking the bourgeois line.

3. Chao Tzu-yang (6392-4793-7122)
Chao Tzu-yang, First Secretary of Kwangtung, is attacked for a report of an examination he has conducted into the progress of the Cultural Revolution in his province. He is quoted as saying that certain people fear that the Cultural Revolution movement will interrupt their work, disturb production, be used by bad people for their own profit and damage their own interests. The poster indignantly demands who has such fears, and attacks Chao for even mentioning them. It is unavoidable and necessary in the Cultural Revolution to create disturbance (luan). Chao is attacked for 'bureaucratism’ and adopting a Mandarin attitude (lao ye). He is said to be shielding those following the bourgeois line of suppressing students, etc.

4. Interview with Ch'en Po-ta
A poster by a group of Peking students dated 2 November reports an interview with Ch'en Po-ta. Ch'en was asked about the editorial on the front page of the People's Daily of 22 October, advocating that students should undertake "Long Marches". The students demanded to know by what right the People's Daily published this editorial.
Was it with the approval of the Central Committee? Ch'en Po-ta said he could not accept responsibility for every word in the editorial, as he had not paid close attention to it, but he defended its general line. (At this point, according to the poster, because Ch'en's Fukien accent was difficult for the Peking students to understand, Comrade T'ang (0781), described as Editor of the People's Daily, spoke on his behalf.) It is a good idea for students to go on Long Marches. It is an excellent way of meeting the masses, spreading the message of the Cultural Revolution - it will enable the students better to understand practical problems and the practical application of Mao's thought.
(There are several other posters suggesting that a number of Red Guards are reluctant to undertake Long Marches.)

5. Kwangtung’s Cultural Revolution
A poster dated 3 November, by a group of Peking students, asks why the Cultural Revolution movement, which is in full flow in other parts of the country, is making so little impression on Kwangtung. Why are there so few big-character posters, and only "little-character posters"? Why is there no struggle; why have the students been suppressed? Peking students say they have examined students from eight colleges in Canton and have not found an answer to these questions.

6. Criticism of "Outside" Students
A poster by students from a number of Canton middle schools attacks the students who have come to Canton from Wuhan, Shanghai and elsewhere. These students have deliberately made trouble. They had hit people, harmed property, insulted girl students, damaged China's name before foreign guests, attacked the Canton Red Guard reception station, and had harrassed and criticised the Canton revolutionary students. The poster strongly demanded that these "outside" students should immediately mend their ways.

7. Canton Export Commodities Fair
An official printed poster, somewhat defensively worded, asked the revolutionary students coming to Canton from other places not to disturb the Canton Pair. There had been many demands by the students to see the Fair, and it was now being arranged that they should be allowed in during the lunch-hour, but the numbers must be limited to "1,500 to 2,000 on average". The students were urged not to disturb or change any of the exhibits of which they did not approve, but to give their suggestions to the directorate of the Fair, who should take due note of them and change the exhibits in accordance with the students' wishes. For various reasons, however, it may not always be possible to meet the students' demands. It was very important that China's foreign trade should not be disturbed.

8. Sung Shuo (1345-4311)
Sung Shuo is criticised on several posters for following a bourgeois line, suppressing the masses and the students, and for falsely holding up the Red Flag, etc. (Our records show that in 1959 Sung was Deputy Director of the University Scientific Work Department of the Peking Municipal Committee, but he now appears to have a responsible post in Kwangtung. The posters attacking him regularly appear beside posters attacking the Foshan Committee, and it is possible that Sung is the First Secretary of this Committee.)
RESTRICTED 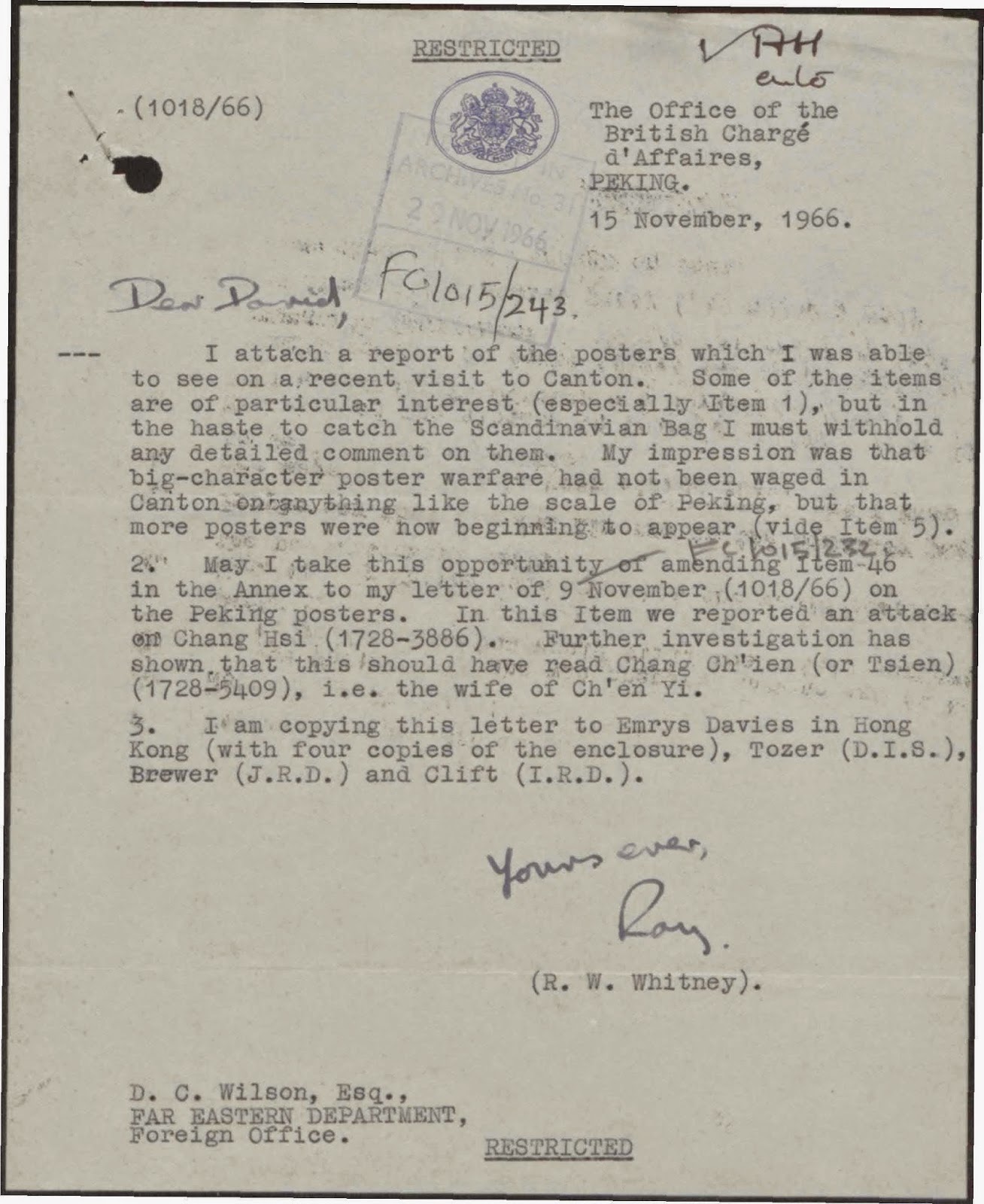 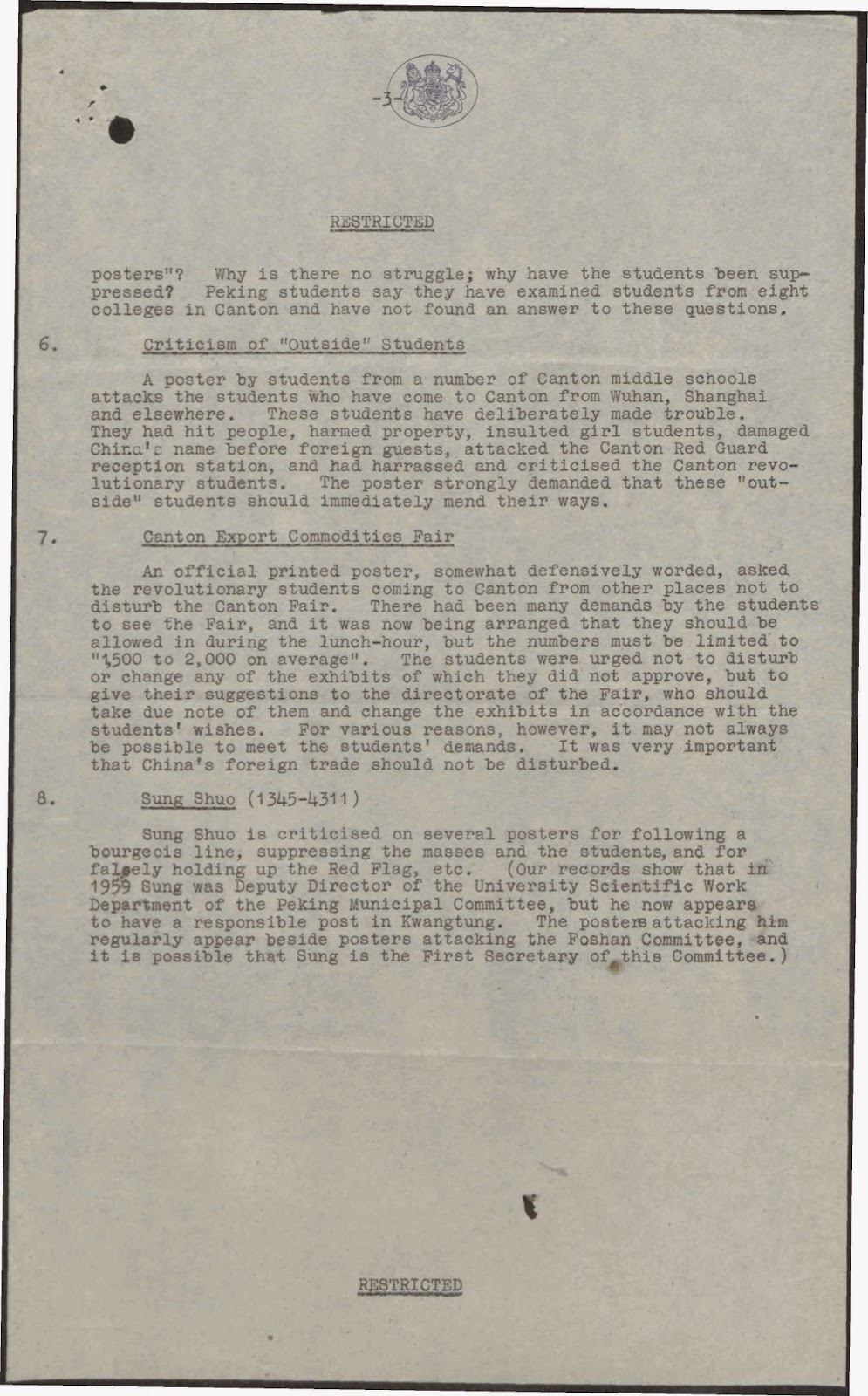