1. Peking Telno 1130 of 4 November drew attention to a People's Daily article of 2 November which suggested there has been a danger of “political tricksters" attempting, inter alia, to usurp the Party and the Army, and which called for the thorough smashing of the "plots and tricks” of false Marxist-Leninists and the building of "our army into an even stronger people's army". We agree with Peking that this is a significant article. It may be one of a series designed to prepare the PLA, the Party and the people generally for revelations about a current power struggle. On 5 November, Ninghsia regional service broadcast an article entitled "Strengthen the dictatorship of the proletariat and prevent the restoration of capitalism - on studying
Lenin's article 'The State and Revolution'" which seems to point even more clearly to the involvement of the Army and some one very high in the Party in a serious dispute (SWB FE/3833 of 8 November). It is curious that an article of this apparent importance should be broadcast by a minor provincial agency. The explanation may be that it is a repeat of one published centrally, if not in People's Daily then perhaps in Liberation Army Daily. The pseudonym "Hung Ping" is commonly used with centrally produced articles.

2. The article is about continuing revolution and guarding against the undermining of the proletarian dictatorship. Examples are cited of "sham Marxists" from the history of the Communist movement in Russia and China. The persons selected as examples are not surprising, but the points made to underline their falseness suggest, very strongly contemporary relevance.
Bakunin, for example, a "conspirator of the First International" is said to have written to Marx saying "I am your student, and I am proud of this” but later to have slandered Marx. Again, Khrushchev is said to have pretentiously praised Stalin as the "close friend and comrade-in-arms of the great Lenin, the greatest genius, teacher, and leader of mankind, a great, invincible supreme commander and his own father when Stalin was alive “. Although Liu Shao-ch'i is also cited as a usurper who had called himself a student of Mao, the Chinese people can hardly fail to see some connection between these references to the "student" and "comrade-in-arms" and the position of Lin Piao.
3. The reference to the use of the army to usurp power comes later in the article. First, the reader is reminded that Mao has taught that the army is the chief component of State power, and that whoever wants to seize and retain power must have a strong army. The article then points out "The fact of Khrushchev's restoration of capitalism in the Soviet Union has shown us that in order to change proletarian dictatorship into bourgeois dictatorship, the faction in power within the Party who takes the capitalist road will not only make use of public opinion, but will always try to seize power over the army".
From Chinese Party history, Chang Kuo-t'ao is cited as having tried to split the Red Army and establish "a separate Party Committee". The article concludes by emphasising the need to strengthen the building of the army and to put the army "under the absolute leadership of the Party and Chairman Mao ……”

4. The message in this passage would seem to be that the current false Marxist (seemingly Lin Piao) with military associates in the Party leadership (in the Politburo), opposed other colleagues and has attempted to secure ascendancy over them (forming a "separate Committee"). 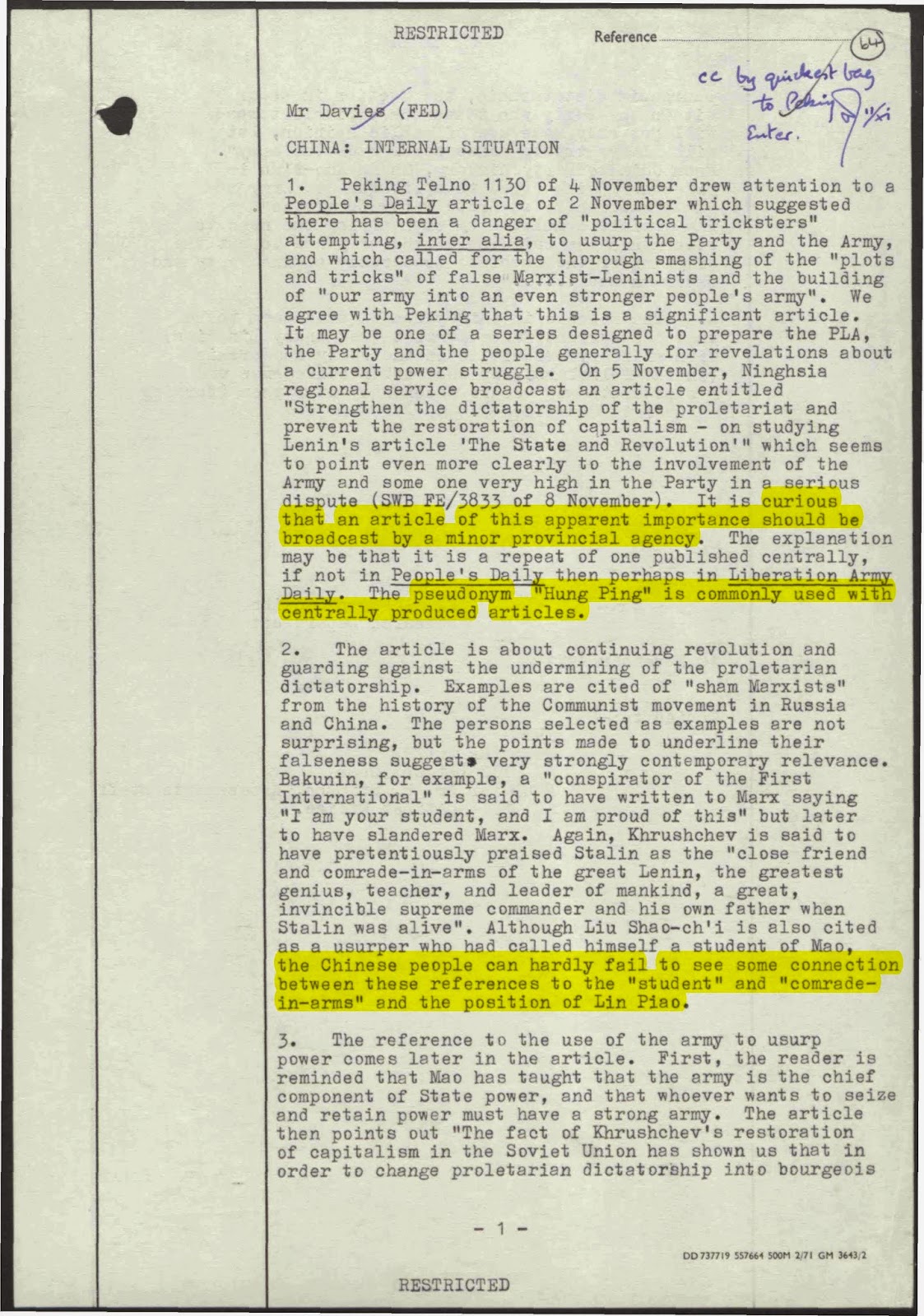 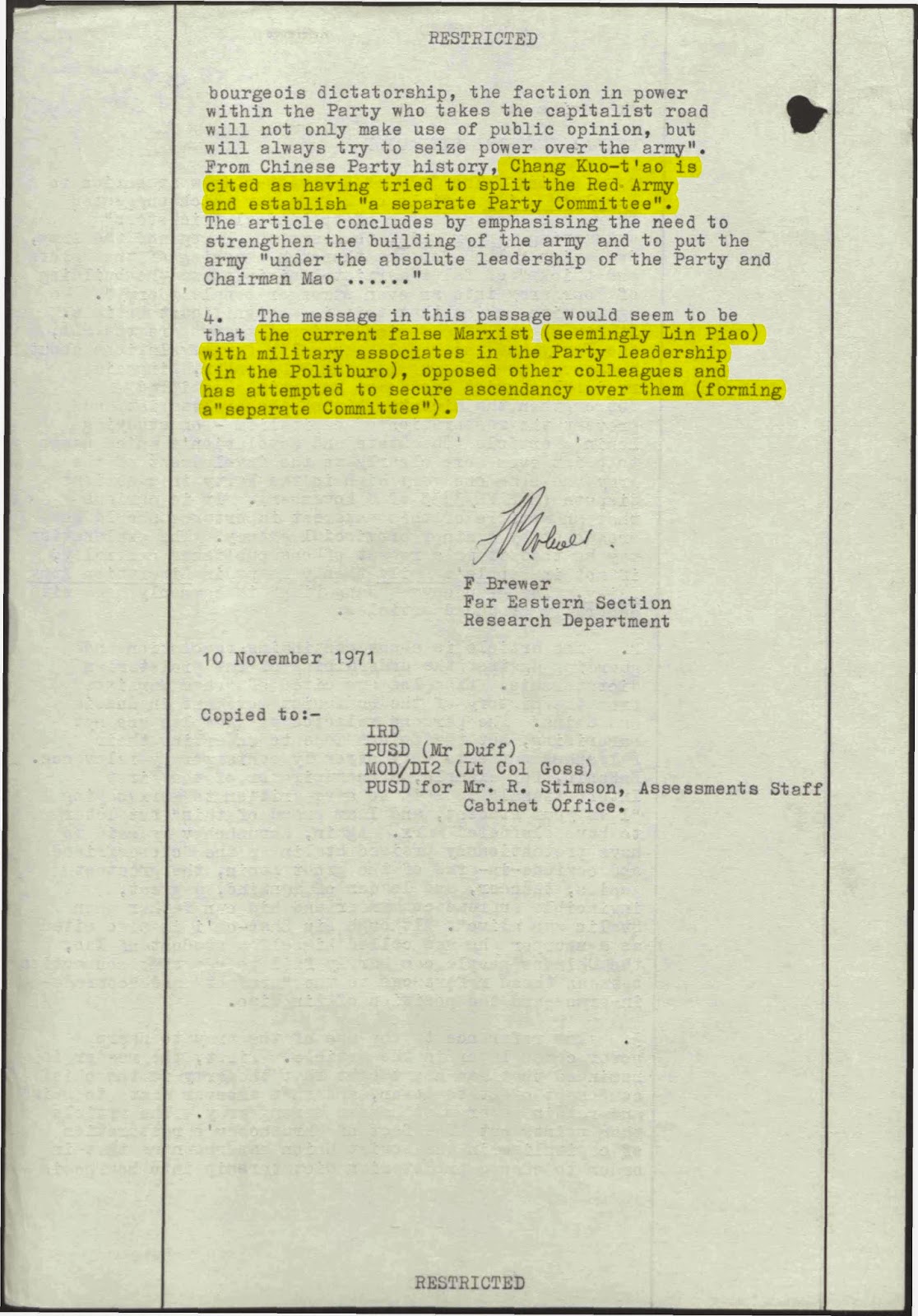