In their content and the violence of their language the articles and speeches commemorating Lu Shun indicate that the internal party struggle has reached a new intensity and may be approaching a crisis. Nevertheless, some passages clearly refer to the international situation and it is sometimes hard to determine where the emphasis lies.

2. Broadly the lines of the struggle seem to be those indicated in my telegram No.870 of 22 October and Cradock's letter to Bolland of 26 October: but the following aspects are worth noting:

(a) Lu Shun is being used by the extremists as an example of struggle to the death against class enemies, defined in the domestic context as the handful of people within the party who are in position of power and have taken the capitalist road. Despite the efforts in the Press to present these enemies as on their last legs it seems clear that they have been putting up a powerful resistance. Presumably their centres are the old-style party apparatus and certain provincial party committees. It is even possible that in some provinces local army units have been giving at least moral support to local party committees under criticism. One poster for example reports that the PLA in Ch'engtu have supported the local party committee in a show of force against Red Guards:

(b) Attacks on "peacemakers" and "fence sitters " suggest that there are a group of moderates in the party who are preaching compromise. It is hard to suggest who might be the members of such a group though some of our colleagues have suggested Chou En-lai for this role. The party is now told that there is no middle way and that everyone must quickly decide where he stands:

(c) The curious passages on isolation and encirclement may reflect a situation in which the extremists at the top level find themselves, at least temporarily, in a minority against the combination of the enemies and the fence sitters. This may explain the shrillness of the call for increased militancy. The passages may also be an encouragement to “Left Comrades" and Red Guards in the provinces where they would normally be in a minority:

(d) There are exhortations for a similar uncompromising struggle, if need be in isolation, on the international front. Attacks are made not only on Imperialists and modern revisionists but also on "those in the international Communist movement who consider that they alone are pursuing the doctrine of the mean: they are in fact showing themselves up as the most vulgar of Revisionists".

(e) Rally of 31 October may have been an attempt to prepare public opinion for an attack on certain leading figures, e.g., Liu Shao-chi, Teng Hsiao-sp'ing, and LiHsueh-feng. Whether they would be represented as insufficiently revolutionary or as out-and-out enemies is not clear. Their non-attendance at the rally and Yao Wen-yuan’s statement that only true revolutionaries could take part in commemorating Lu Shun were very pointed. Teng was not present at the airport to see K'ang Sheng off to Albania. On the other hand all three were present on the rostrum at today's mass rally in Tien an-men though given minimum notice.

3. The Red Flag editorial carried by the People's Daily of 2 November spells out the internal party situation in some detail and makes it clear that the main indictment against erring comrades will be that of opposing and suppressing the masses. This could cover both opposition to the initial idea of the Red Guards and responsibility for the errors of the first work-teams. On both counts Liu Shao-ch'i would seem vulnerable. The editorial repeats the warning of the Red Flag article of 3 October (my telegram No.832) that, failing recantation, the contradictions with these comrades will be treated as antagonistic i.e., with the enemy. By apparently leaving this opening for repentance and by allowing that there may be various categories of guilt, this editorial strikes a slightly less tough note than the Lu Shun polemics. But the general effect is minatory enough. 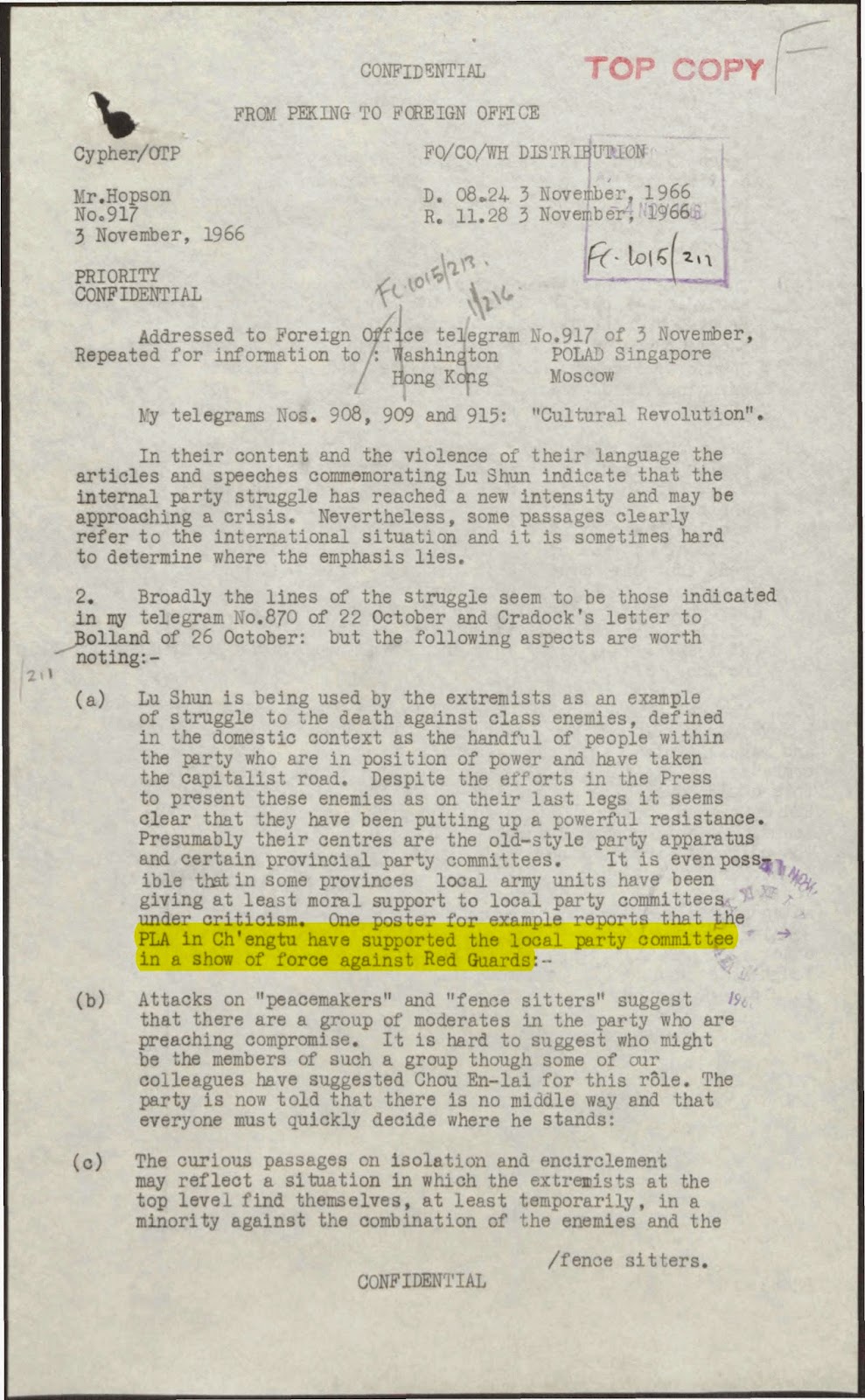 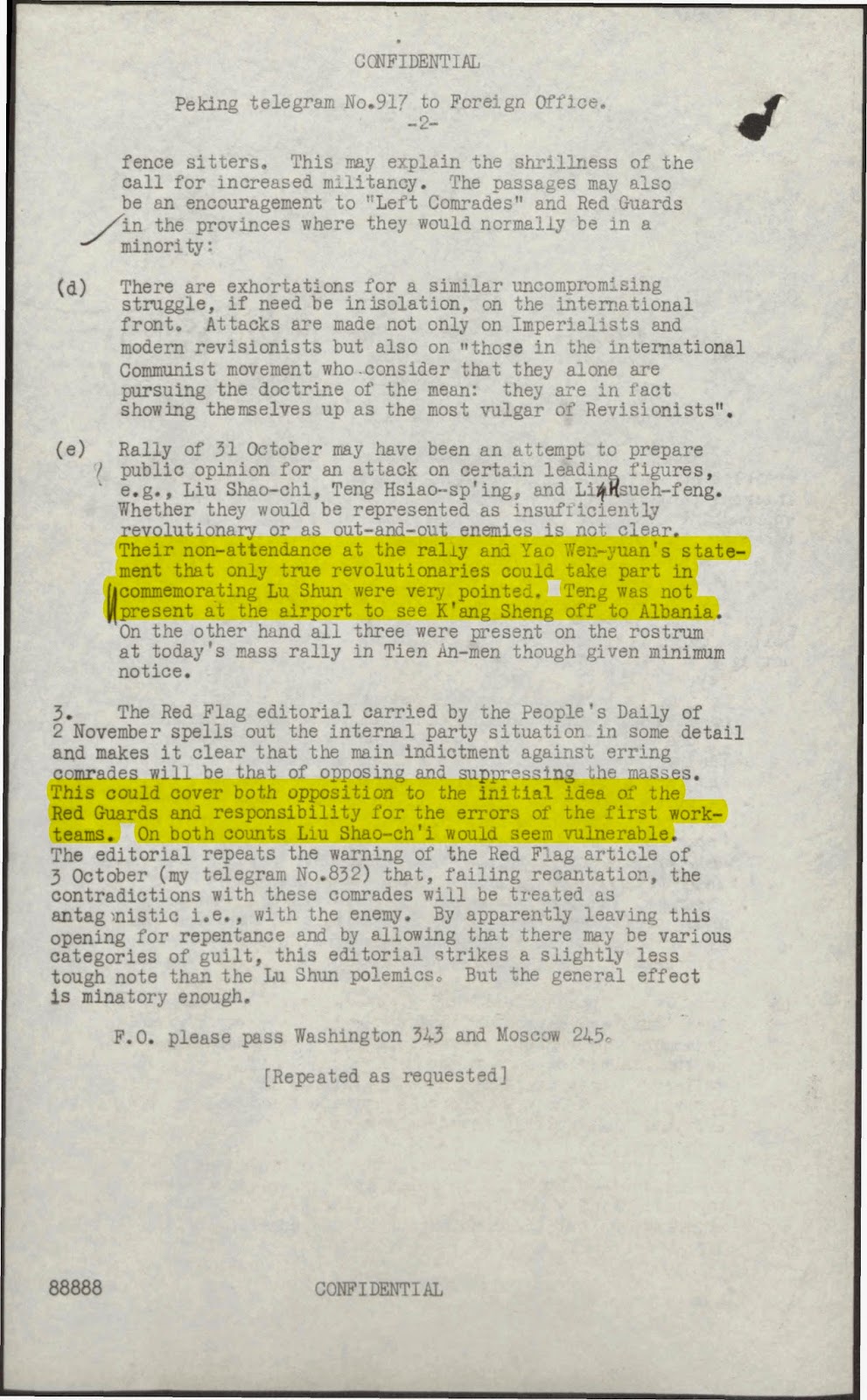