UNEN TODAY REPORTED THAT A JET AIRCRAFT OF THE CHINESE PEOPLES REPUBLIC CROSSED THE MONGOLIAN FRONTIER AT 0155 ON 13 SEPT CRASHING FROM UNKNOWN CAUSES AT 0255 IN KHENTIIAIMAG IN POSITION 111.15 47.42.
THE BURNED BODIES OF NINE TROOPS WITH SIDEARMS DOCUMENTS AND OTHER OBJECTS WERE FOUND INDICATING AIRCRAFT BELONGED TO THE AIR FORCE.

2. THE AIRCRAFT HAS BEEN SHOWN TO REPRESENTATIVES OF THE CHINESE EMBASSY.
MONGOLIA HAS PROTESTED TO CHINA AGAINST THE VIOLATION OF ITS FRONTIERS AND DEMANDED AN EXPLANATION.

(TASS in English) Ulan Bator: The Montsame agency has issued a report saying that on the night of 12th-13th September a jet plane belonging to the PRC violated the air space of the Mongolian People’s Republic and, continuing its flight deep into the country’s territory, crashed for unknown causes in the area of Hentei Aimak.
The charred bodies of nine people, firearms, documents and equipment pointing to the plane’s belonging to the PRC airforce were found at the place where this plane crashed.

Chinese diplomats here denied tonight that a Chinese military aircraft had crashed in the territory of the Mongolian People's Republic. They said it was a civilian aircraft which had lost its way.
Earlier the Mongolian news agency, quoted by Tass, alleged that a Chinese jet flew deep into Mongolian air space on the night of September 12-13 and crashed for unknown reasons, killing all nine people on board. It said firearms and documents found on board indicated that the aircraft belonged to the Chinese Air Force.
The Chinese diplomats said at a big reception here that they thought their government had already replied to the Mongolian government's protest. However, they were not sure about this, and the Chinese press has apparently not mentioned the incident. The Chinese diplomats questioned Mongolia's motives in raising this subject today, the eve of China's national day.
The diplomats also dismissed as "rubbish and lies" Western and Soviet press reports that some political changes are taking place in Peking, or that Chairman Mao
Tse-tung is ill. " A human being can often get sick ", they said, " But at this moment Chairman Mao is in excellent health."
Though there was no bust of Chairman Mao in the embassy reception ball tonight, an exhibition of photographs showing him in various poses had been set up.
The most recent was taken last year.
Asked about the state of affairs on the Soviet Chinese frontier, the diplomats seemed less confident but said they thought it was normal, though there were many troops on the Soviet side of the border. They emphatically dismissed rumours that the disgraced head of state, Mr Liu Shao-chi, is in the Soviet Union.
In general, the officials were more communicative than anyone here could remember them being for several years past. The most senior Soviet representative to attend the reception appeared to be Mr Nikolai Rodionov, who was appointed a deputy foreign minister last year. But there was a good turnout of ambassadors accredited in Moscow, including Sir John Killick, the new British envoy. No Americans were invited.
As regards Mongolian-Chinese relations, the incident comes at a time when the ground has seemed to be being prepared for a slow improvement. A Chinese ambassador was sent to Ulan Bator last month for the first time for four years. However, if there is to be a fresh deterioration in Soviet-Chinese relations it is certain that Mongolia will be heavily involved on the Soviet side.
Soviet planning with regard to China is apparently in an extremely volatile state. The intense campaign of anti-Chinese propaganda that was unleashed after the announcement that President Nixon would visit Peking has almost dried up since the start of this month's mysterious events and rumours in Peking.
The Russians have stated that they believe something is up on the Chinese political scene. Mr Gromyko, the Foreign Minister, has given an unprecedented warning of international tension and even war if other states try to gang up on Russia. It was obvious from the context that he was referring to the United States and China. His statement, made on Tuesday at the United Nations, was dropped from the official text of his speech published yesterday in Pravda and Izvestia.
The drying up of the anti-Chinese propaganda suggests that the Russians are hoping for a political change in Peking which would be in their favour, and are not going to make themselve seem more than usually anti-Chinese while they wait to see what happens. If there has been trouble on the frontier, they may be trying to sort it out without aggravating matters further through inflammatory propaganda.

按：Colvin说此间的外交使团也注意到香港媒体之前关于刘少奇出逃的报道。某使馆的蒙古翻译说中方失事飞机是最近才从巴基斯坦买来的，飞机因气候恶劣而失事，而且同一天蒙古航空公司一架载员16人的伊尔14飞机也因为类似原因失事。Colvin说有个同事记得那天气候不好，但他回忆不起来。
THERE IS SPECULATION AMONGST MY COLLEAGUES, WHO ALSO HEARD EARLIER HONG KONG PRESS REPORT OF HIS ESCAPE, THAT THIS AIRCRAFT CARRIED LIU SHAO CHI.

2. THE MONGOLIAN INTERPRETER OF A DIPLOMATIC MISSION HERE TOLD ME THAT THE AIRCRAFT WAS A RECENT CHINESE PURCHASE FROM PAKISTAN WHICH HAD CRASHED IN VERY BAD WEATHER: AN IL14 OF MONGOLAIR CONTAINING 16 PEOPLE WAS SAID TO HAVE CRASHED TIE SAME DAY FROM SIMILAR CAUSES.

3. ONE COLLEAGUE REMEMBERS BAD WEATHER THAT DAY: WE DO NOT RECALL IT. 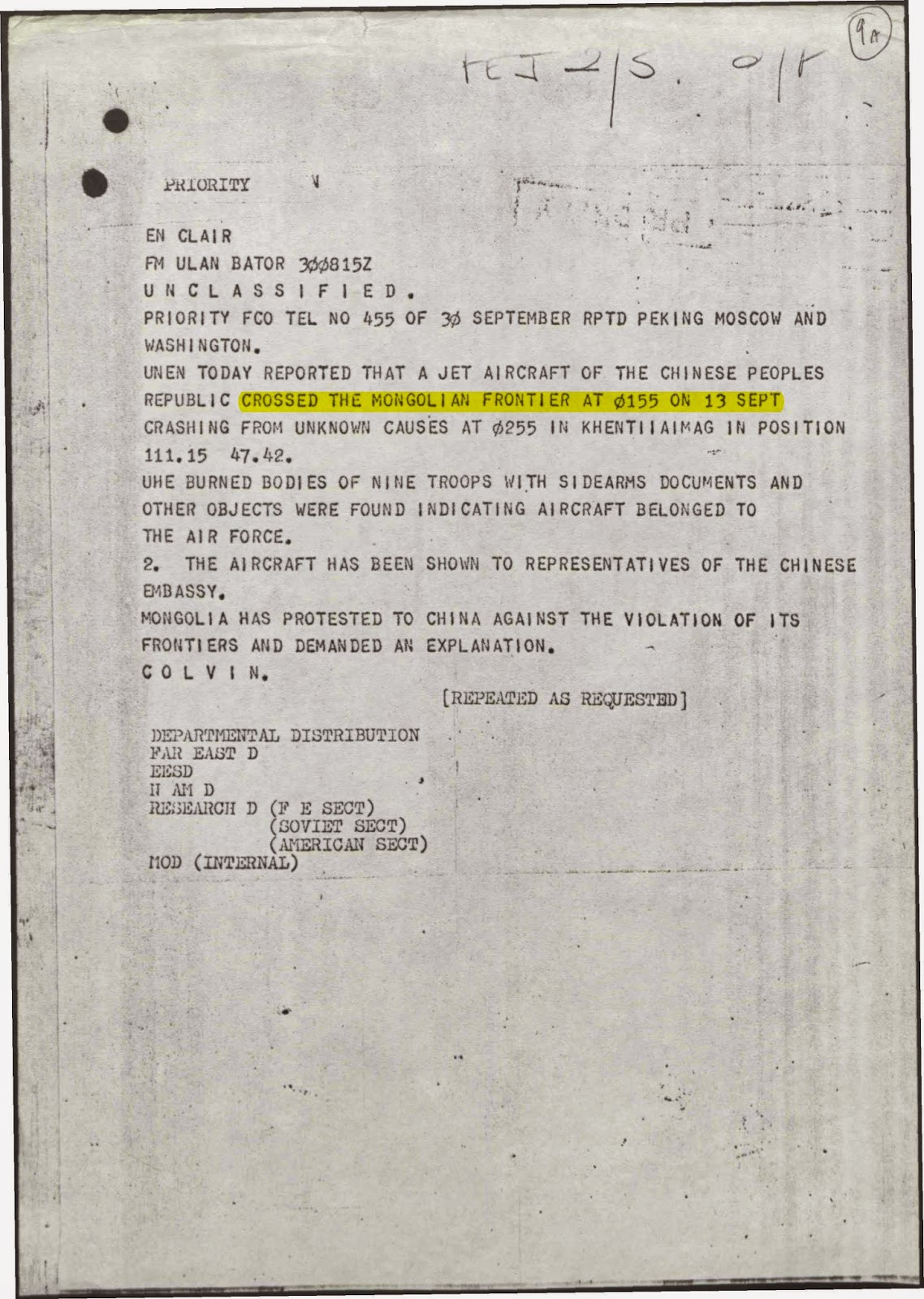 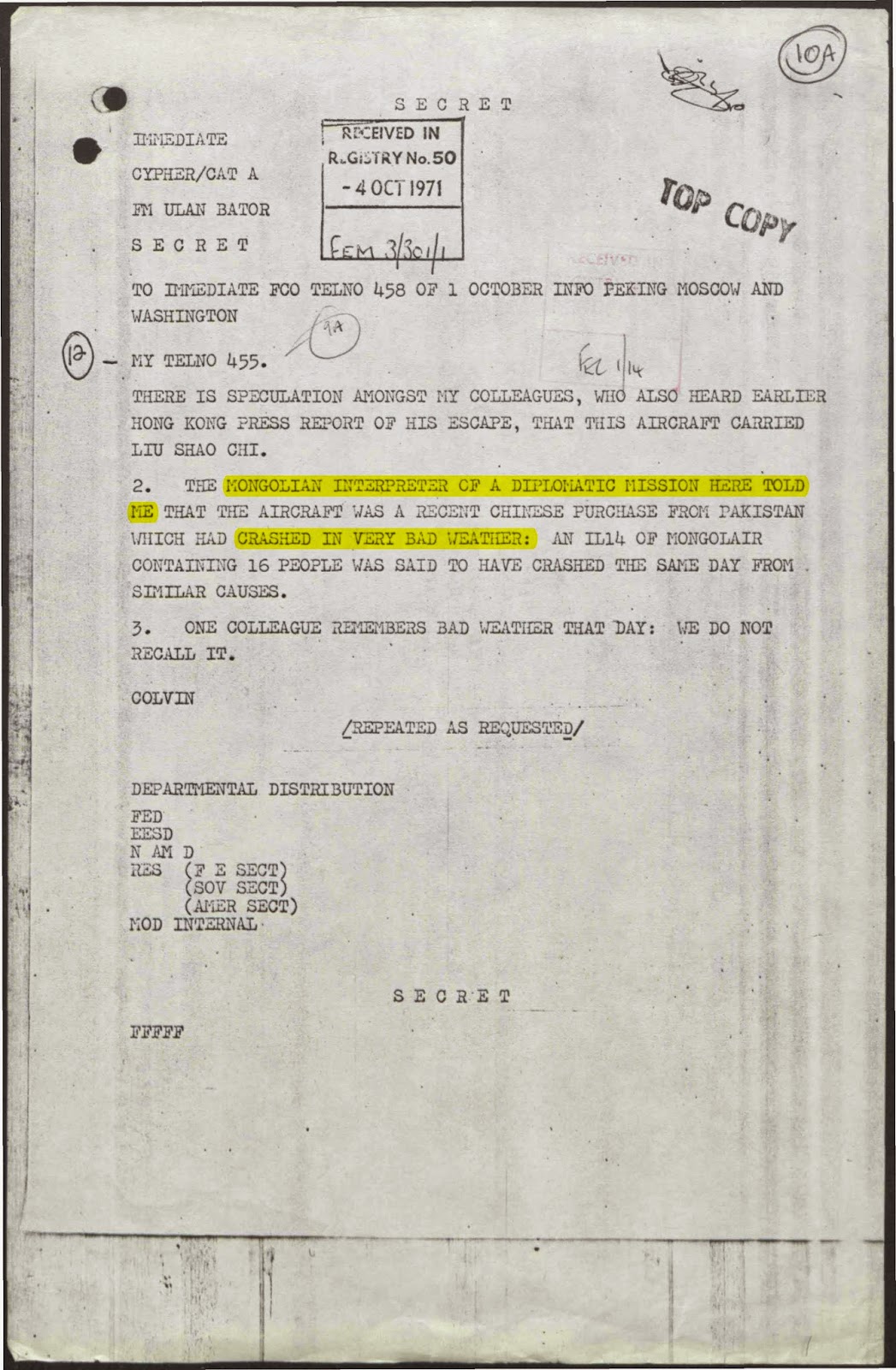