The Office of the British
Charge d'Affaires,
PEKING:
4  January, 1967.

Dear David:
The attached collection of posters seen in Peking between 24 December and 3 January contains a number of interesting items, of which we have already reported some of the more important by telegram (Nos. 1061, 1073 and 1075).

2.  The major event of the period was the outbreak of violent and lengthy attacks on Liu Shao-ch'i. The amount of this material now to be seen in Peking is almost overwhelming, and the items we have included (14, 17, 24, 26, 33, 50 and 60) are only a sample, although we believe that they are representative and include all the important points. The detail in the posters accusing Liu provides many fascinating glimp­ses of differences within the Chinese leadership in the past, even allowing for the gross distortion which we must assume is contained 1 therein. The welter of accusations seem to confirm that the clash between Liu and Mao is probably based on personal grounds as well as differences over policy. The attacks on Wang Kuang-mei, particularly that of Chiang Ch'ing in Item 59, suggest a very bitter personal feud between the two families.

3.   The main fire has thus been concentrated on Liu, with whom Teng Hsiao-p'ing now seems to be automatically linked in a somewhat cursory manner, but there are also some interesting sallies against other Chinese leaders. T’ao Chu (32(v) and 35) has been under a certain amount of criticism, but the attacks do not yet seem to have reached serious proportions. Those on Wang Jen-chung, his sucessor in the Central South Region (19 and 17) do, however, seem to be more serious. Given their previous relationship, one might have speculated that Tao and Wang would have been close collaborators and therefore been tempted to see attacks on Wang as indirectly affecting T'ao Chu. However, I might here record a piece of gossip that I recently heard from the East German correspondent, that in fact these two are bitter rivals and are responsible for many of the poster attacks against each other.

4.  The attacks on Chou Jung-hsin and Hsu Ming (27) also seem quite serious, particularly in view of the fact that they came from Chiang Ch'ing herself. Taking account of the posts both of them hold in the State Council, one begins to wonder if they may have any relevance to Chou En-lai's position. Such speculation is also stimulated by the curious reference to Lin I-hsan (2), who is described as the 'time bomb’ by the side of Chou. The attacks on Po I-po (20 and 39) and Ch'en Yi (32(iv)) probably add nothing new, and that on Ch'en Yi at least seems to be another rather random shot.

5. As one would expect, in view of the new policy of bringing the workers into the movement (the People's Daily new refers to them as the 'main force’ of the Cultural Revolution), there is more evidence of workers' activities to be seen in posters (5, 18 and 31). They still call themselves by a number of names, but the terminology 'Red Rebels' (hung-se tsao-fan-che) seems to be emerging as the standard nomenclature.

26 December
17 Liu Shao-ch'i and Teng Hsiao P'ing:
Three posters attacking Liu Shao-ch'i as a counter-revolutionary revisionist and right opportunist were seen near the State Council. The longest, dated 25 December, was issued in the name of the Red Guards of the Chinghua University, and demanded that Liu be "struck down" and listed his ten crimes.
Liu was said to have      opposed the thought and leadership of Mao for many years.       At the time of the Liberation he said "This is solely a victory for Marxism-Leninism, and by no means a victory for the thought of Mao".     In 1954 he was responsible for wide publicity being given in China     to a letter by a Russian (Ko-lieh-erh-tse-man) to Yang Hsien-chen, describing the study of the thought of Mao Tse-tung as "simpli­fication" and "vulgarisation". In 1962 he was responsible for his own work "How to be a Good Communist" being given a wide circulation, and this was in opposition to Lin Piao's essay "Study Mao's Thoughts". In the same year he was also responsible for preventing an item on the study of the thought of Mao Tse-tung being included in a revised version of the Party Constitution. For several years past, including his speech to the Eighth Plenum in 1956, Liu has not mentioned Mao or his leadership.
Soon after Liberation he said it was too early to speak of Social­ism. He opposed land reform in 1951 and supported the idea of a rich peasant economy, and said this "was not a temporary but a long-term phenomenon". He was also a supporter of capitalist technology and business methods, and attempted to sabotage the movement to collectivise agriculture (in 1955). He approved the resurgence of capitalism in 1962. When Mao put forward the "first ten points", Liu proposed the "last ten points" (hou shih t'iao). Mao thereupon produced_the 23 Points (ch'ien shih t’iao).
Liu is also accused of hostility to the Great Leap Forward and of producing a critical report.
In the 1957 campaign he is said to have supported the rightists. He has distorted history to denigrate the role of Mao in the Chinese revolution. One example of this was his attempt to claim authorship of the idea of "half work, half study", which was in fact Mao's own. Wang Kuang-mei had peddled her husband's claim around the country, and she is also accused of other efforts to build up the prestige of the Liu family (Liu Chia FU-0491 -1367-1650). She helped Liu's efforts to mis­lead Chinese youth.
Liu is said to be an ambitious careerist. He had opposed Mao's ideas on the class struggle and had advocated "close harmony and reconciliation", saying that “the class question has already been solved"
He has opposed the Cultural Revolution, which he wanted to limit to "a purely academic discussion". He was at a loss when Teng To and Wu Han were weeded out (Liu is accused elsewhere of using the People's Daily, Peking Daily, Ch'ien Chin and the Youth Newspaper (Ch'ing Nien Pao) to attack Mao), and tried to protect Teng. He gave publicity to T'an Li-fu's speech, sent out the work teams to suppress the move­ment sent Wang Kuang-mei to Tsinghua University, issued secret orders misusing the name of the Central Committee to confuse the Party and direct it against the Cultural Revolution. When Mao realised what was happening and Liu was uncovered he made a confession, but this was false and insincere. He still has a certain influence and has been "collec­ting material" (?). He is not ready to accept defeat and, as Mao says, if the enemy will not surrender, he and Teng must be annihilated.
In 1962 a (counter-revolutionary) adverse wind blew up in China, and a lot of right opportunists became active - such as Yang Hsien-chen, etc. These people would not have survived for a second without the support of Liu, P'eng and the rest.
Liu and P'eng both tried to rewrite and distort the history of the C.C.P. to downgrade the part played by Mao. In particular, Liu made a great fuss about the celebrations of the "12.9" anniversary (9 December), especially last year when there were articles in the People's Daily, Peking Daily, etc., and an exhibition, all playing up the role of Liu in the "white areas" (during the war).
Liu was also opposed to the Four Clearances campaign in 1964.
There are many large strip posters demanding simply "Strike Down Liu", "Weed out the Evil Influence of Liu and Teng", etc. It is of interest that we have so far seen no detailed attacks on Teng in the recent wave. He is merely appended at the end of the catalogue of Liu's crimes.
Public reaction to the posters was apathetic, although there was a fair amount of (apparently aimless) activity in the city - columns of marchers, lorry-loads of students and workers, etc.

19.Wang Jen-chung
Posters attack Wang Jen-chung (Acting First Secretary of Central South Region) as one who is pursuing the bourgeois line and inciting the masses to struggle against each other.

20.Po I-po
Po I-po is again attacked for advocating bourgeois and revisionist economic policies and for attempting to suppress the Cultural Revo­lution.

22.Shanghai
Two posters demand that the Public Security Forces should take action against the "handful in the art colleges and institutes of Shanghai who have been suppressing the students".

23.Ch'en Chih-yuan
Two posters say "Ch'en Chih-yuan is a scoundrel who should be dismissed” (according to our records Ch'en was Secretary General of the China Electrical Engingeering Society in October, 1965). 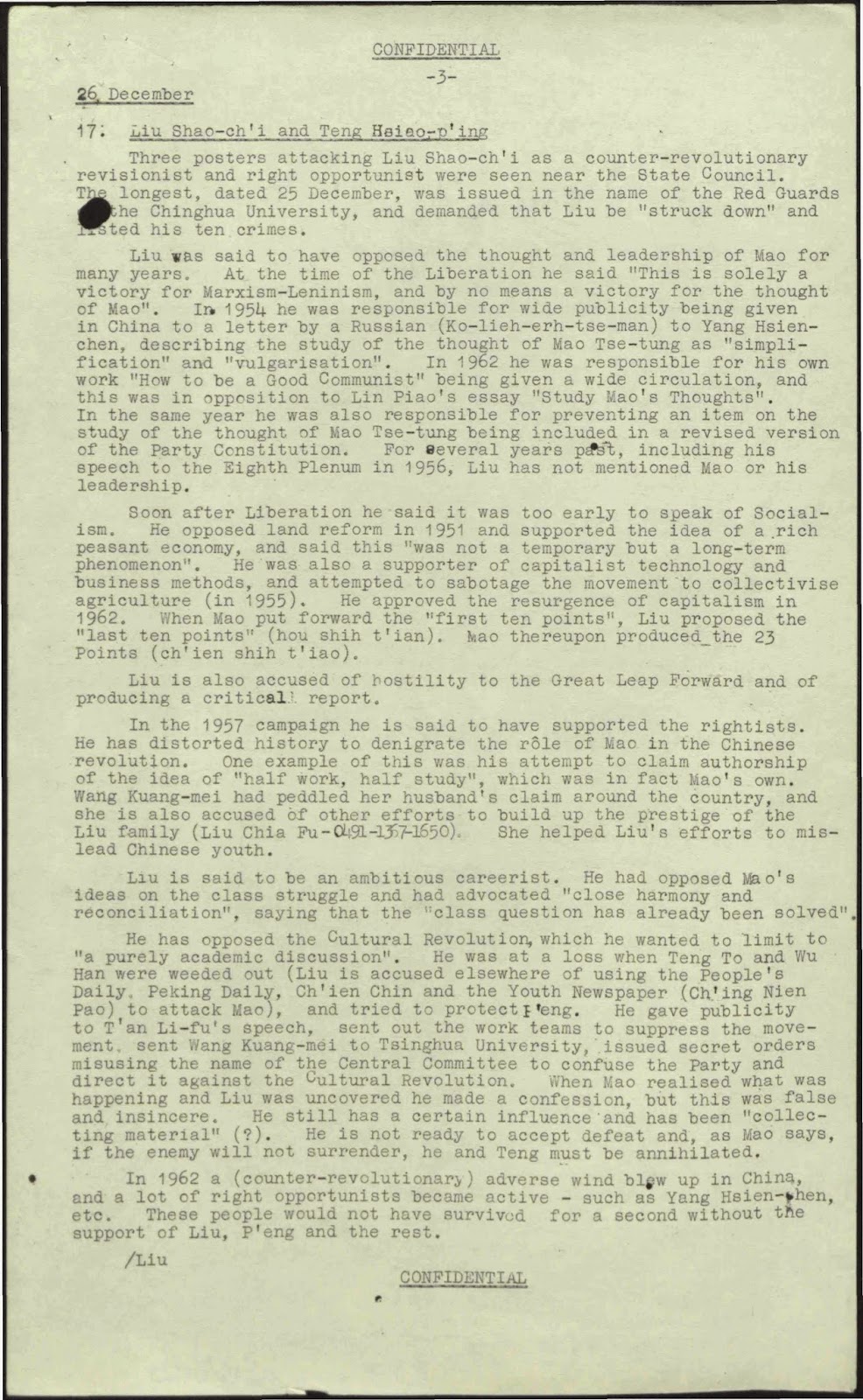 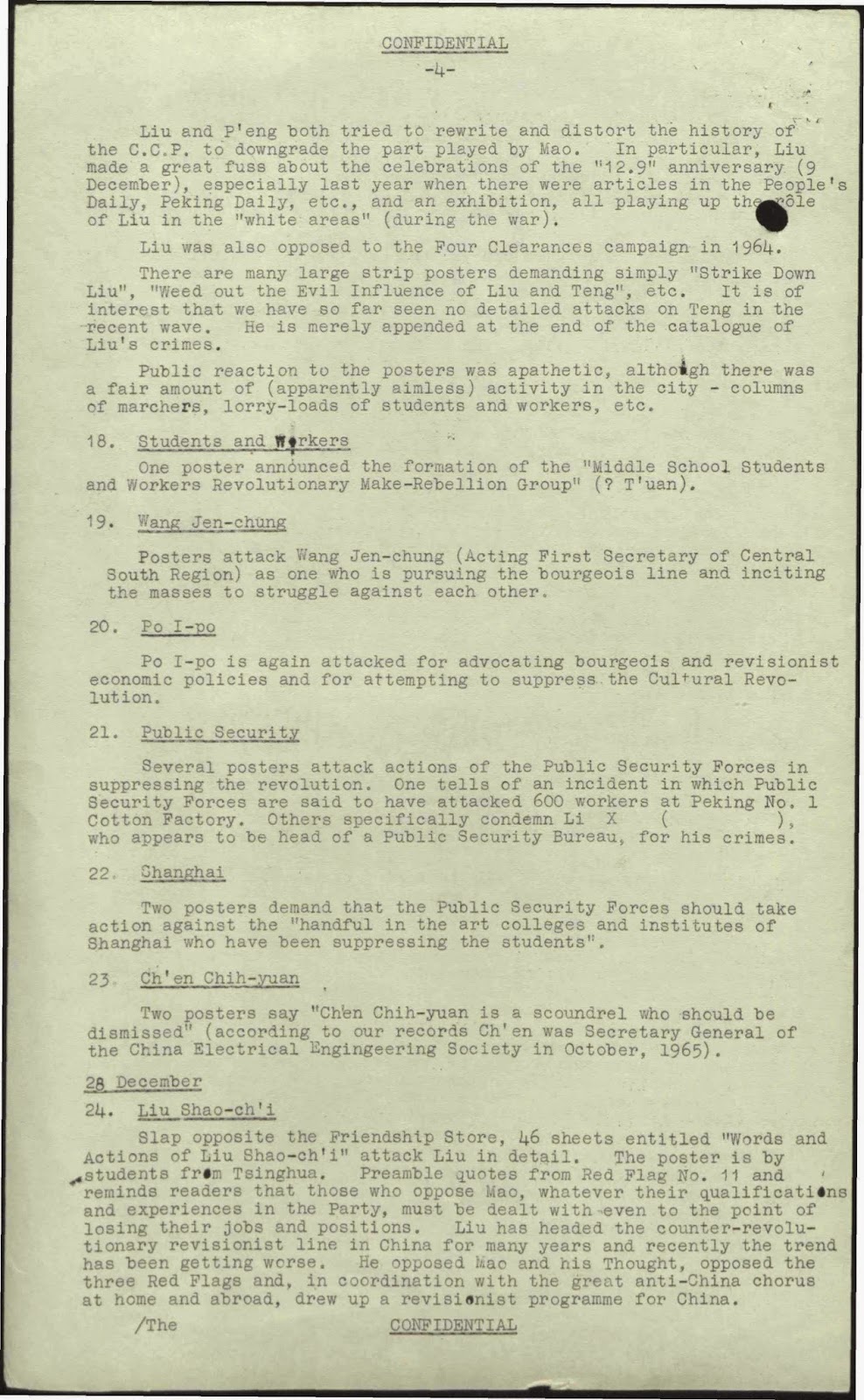