30. Public Security Forces
Ministry of Public Security appears to be receiving increasing attention. On the afternoon of 30 December there was a large crowd outside its headquarters in T’ien An Men, which though it did not appear particularly hostile or riotous, was being exhorted by a female voice over a megaphone from inside the gates of the Ministry to disperse and go home. She claimed that the Public Security Ministry was an organ of the dictatorship of the proletariat and they could not simply burst in (ch'ung chin) and cause confusion (ta luan). The voice through the megaphone told the crowd that if they had any demands to make they must send in representatives and not try to burst into the building. At this point I left. When I returned twenty minutes later, the crowd had grown and a male voice at the megaphone was pointing out that the Central Committee, the Great Hall of the People, the Broadcasting Station and the Ministry of Public Security were sacrosanct and could not be broken into at will. He also claimed that the Ministry of Public Security was faithfully carrying out the Cultural Revolution. Soldiers were attempting to clear a path through the crowd with little success. Since the majority of those present were onlookers, it was impossible to determine what had led to this scene. By this time the attention of the crowd around was centred on me and in the midst of hostile glances and questions, I thought it time to leave.
A large-type serial poster not far from T’ien An Men proclaimed "We sternly demand that the Ministry of Public Security execute (chiang pi) P'eng, Lo, Lu and Yang. A similar poster demanded the "thorough re-organisation" of the Nant'ung Public Security Bureau (Nant’ung is in Kiangsu Province).

31. Workers
I was informed by the attendant at the taxi stand in Wang Fu-ching that workers were electing delegations and despatching them to Peking.

32. Other posters
(i) A serial poster near T'ien An Men ran as follows: The Kiangsi Party Committee is faithfully implementing the bourgeois line of Liu Shao-ch'i.
(ii)     A poster put up before my eyes read "We sternly demand that Li Fu-ch'un should go to the 7th Ministry of Machine Building to investigate".
(iii)   Another poster said: “Pluck out those behind the United Action Committee" (there are several other references to this Committee but I have not yet seen anything which clarifies its meaning).
(iv)     "Burn Ch’en Yi" (described as 'old officer Ch'en'); "Bombard the M.F.A. ". A strip poster in large characters
(v) "Bombard T’ao Chu"; "Down with Hsiao Wang-tung (5618,2598, 2639);
(vi)     "Bombard the Ministry of Posts and Telegraphs"; and
(vii)   "Kick Liu Shao-ch i ard Teng Hsiao-p'ing out of the Politburo".

33 Liu Shao-ch’i
There are a large number of posters and cartoons attacking Liu, sometimes by himself and sometimes in company with Teng Hsiao-p'ing.
A poster dated 24 December and produced by the Ching Kang Shan group of Tsinghua University attacks both Liu and Teng Hsiao-p’ing for their activities during the early part of the Cultural Revolution. Both are accused of having aided and abetted P’eng Chen:     had they not done so how would P'eng Chen’s felonry programme have obtained the approval of the Central Committee?" They are also both accused of suppressing the original posters attacking them produced by Madame Nieh at Peita in May, and of sending their own trouble-shooters (one is identified as Chiang Nan-hsiang (5592, 0589, 5046) (Minister of Higher Education and Alternate Member of the Central Committee) to Peita to prevent further attacks on them. Liu is accused of having attacked reivisionism abroad but not at home in a speech made to the 4th Plenary Meeting of the Philosophy and Social Sciences Department of the Academia Sinica; furthermore, Liu is taken to task for his defence of the work teams made in a speech on 29 July. Liu’s daughter. Liu T’ao (0491, 3447) , is also criticised for having gone round tearing down those posters which criticised her father. This incident occurred on 28 August.
A further set of posters accuses Liu of having been a real rightist and false leftist during the Anti-Rightist Campaign of 1957. Yet another set of posters gives a record of a conversation between Liu Shao-ch’i and the family of Wang Kuang-ying (3769, 0342, 5391), presumably Wang Kuang-mei’s sister, in August 1960. In this conver­sation Liu gave his views on the international situation. The poster says that the conversation was suffused with the spirit of '’self1' and contained entirely unacceptable remarks about individualism. Liu went so far as to say that, as the story of Ah Q showed, there was a difference between townsfolk and countryfolk. This did not mean to say that either was better than the other, but that they each had their own special characteristics.

35. T’ao Chu
Several more posters attacking T'ao Chu have appeared, dated 30 and 31 December. One simply says "T’ao Chu is a two-faced hypocrite". A second group of posters repeats this accusation and claims that T’ao Chu has suppressed the revolutionary activities of the People’s Uni­versity and demands that he return there to make a self-confession. This second group of posters was signed by students from the People's University.

37. Regional
A    serial poster extends    "respects to those fighters who took part
in the    (decisive ?) struggle in Sinkiang on 19 December”. Other posters attack the Yunan Provincial Committee and the South-West Bureau.

39. Po I-Po
A poster dated 30 December demanded that "revisionist" Po I-po should be handed over to the workers.

40. Ministry of National Defence
A three-part serial poster not far from T’ien An Men proclaimed "Raze the industrial office of the Ministry of Defence (ku* fang kung pan) , burn Li Pu-ch’un and thoroughly strike down the 7th Ministry of Machine Building"

41 News media
A brief poster demanded that the "news media world" should be shaken up.

42. Red Guard Rivalries
Red Guard rivalries may be reflected in a poster signed by students of the Film Academy which complains that some people "do not allow others to speak” and goes on to accuse the Third Headquarters of suppressing revolutionary activity.

43. Hunger strike
A serial poster voiced support for the struggle of the 4,000 people who have gone on hunger strike. I was unable to decypher who or where these people were. 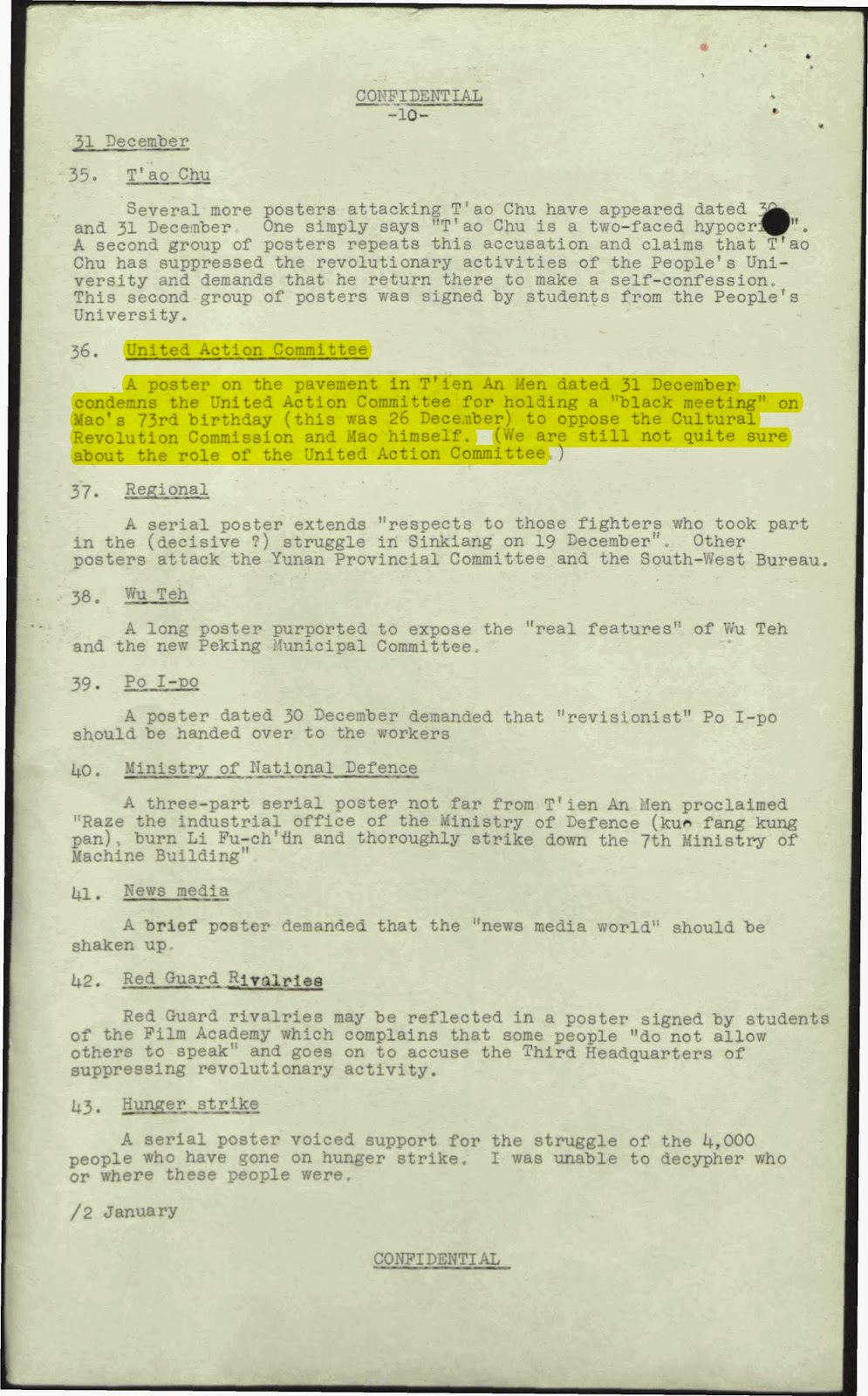 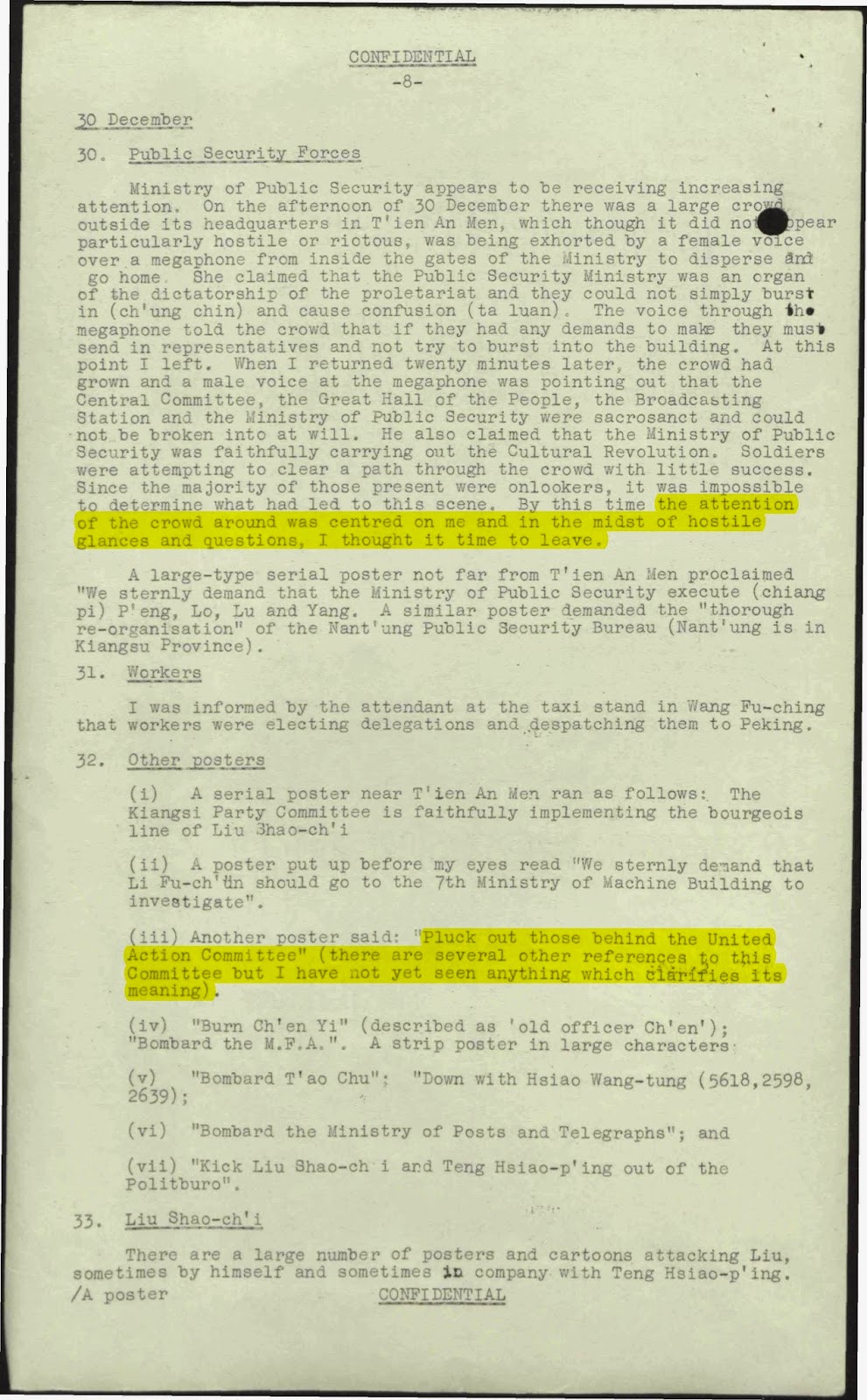