One of the few diplomatic missions in Peking to maintain an unblemished record this year with the Chinese has been the Embassy of Finland. The number and importance of the Chinese official guests who attended the Finnish National Day celebrations at the Embassy on 6 December suggest that the Chinese for their part are also glad that they still have some “respectable” friends in the diplomatic corps with whom they can associate without embarrassment.

2.  The Finnish reception, a short account of which was published in People’s Daily and NCNA of 7 December, was attended on the Chinese side by Vice Premiers Li Fu-chun and Ch'en Yi; Vice Chairman of the Standing Committee of the People's National Congress, Kuo Mo-jo; Vice Minister for Foreign Affairs, Lo Kuei-po; and a large retinue of other officials. This turnout compares more than favourably with similar occasions at other Scandinavian embassies this year and suggests more than just a routine show of politeness.

3.  Ambassador Veli Helenius had earlier informed the Chinese Foreign Ministry that he intended to address his toast at the reception simply to the "Chinese leaders". The Chinese however asked particularly that he should mention leaders by name.
This he duly did, starting of course with Chairman Mao. Ch'en Yi proposed the second toast, to friendly relations between China and Finland, and in doing so followed the new Chinese practice of referring to Mao a second time, i.e. after the "health" of the President of Finland. Another quaint variation of the usual protocol was that Mrs. Helenius was not allowed to join her husband in sitting with the principal guests the reception on the grounds that the Chinese had none of their wives present!

4.  It seems that the Chinese intended two things on this occasion. Firstly they wanted to demonstrate that they are once again capable of carrying on the normal diplomatic inter­course in accordance with accepted social conventions, despite their flagrant disregard for diplomatic privileges and immunities over the past year. Secondly it was our impression that this was also a chance to restore to Ch’en Yi something of his former kudos. Photographers were very much in evidence and Ch’en Yi showed no shyness of them. There have been a number of signs over the last few weeks that Ch'en Yi is firmly back in the seat as a working Foreign Minister. The style of his appearance at the Finnish reception confirms that this is in fact the case.

5. It must be said that the Finns have in general been quite skilful in maintaining a "low posture" with the Chinese, without going down on their knees about it. This no doubt is partly because the Chinese are aware of the delicate relations between Finland and the USSR and therefore think to profit from what they see as a coincidence of anti-Russian interests on the part of Finland and China. The following incident is a small illustration of the circumspection with which the two sides treat one another: You may recall that on the night of our fire on 22 August the Finns found themselves, perhaps a little reluctantly, affording refuge to some of our mob-mauled staff. Some of the Chinese crowd actually penetrated the Finnish Embassy itself in pursuit of their victims, until they were finally sent packing. When the Finnish Ambassador recently paid a call on the Chinese Foreign Ministry to introduce a newly arrived Attaché, the Chinese took the opportunity to thank him for not having protested about the intrusion into his embassy on 22 August. Such things, they claimed, were bound to happen in revolutions! It is characteristic of Sino-Finnish relations, as we see them conducted here in Peking, that the Finns should not have protested about such an incident, and that the Chinese should go out of their way to thank them for their forbearance.
I am copying this letter to Roy Spendlove in Washington and to Chancery at Helsinki.
Yours
Ever
John
(P. J. WESTON) 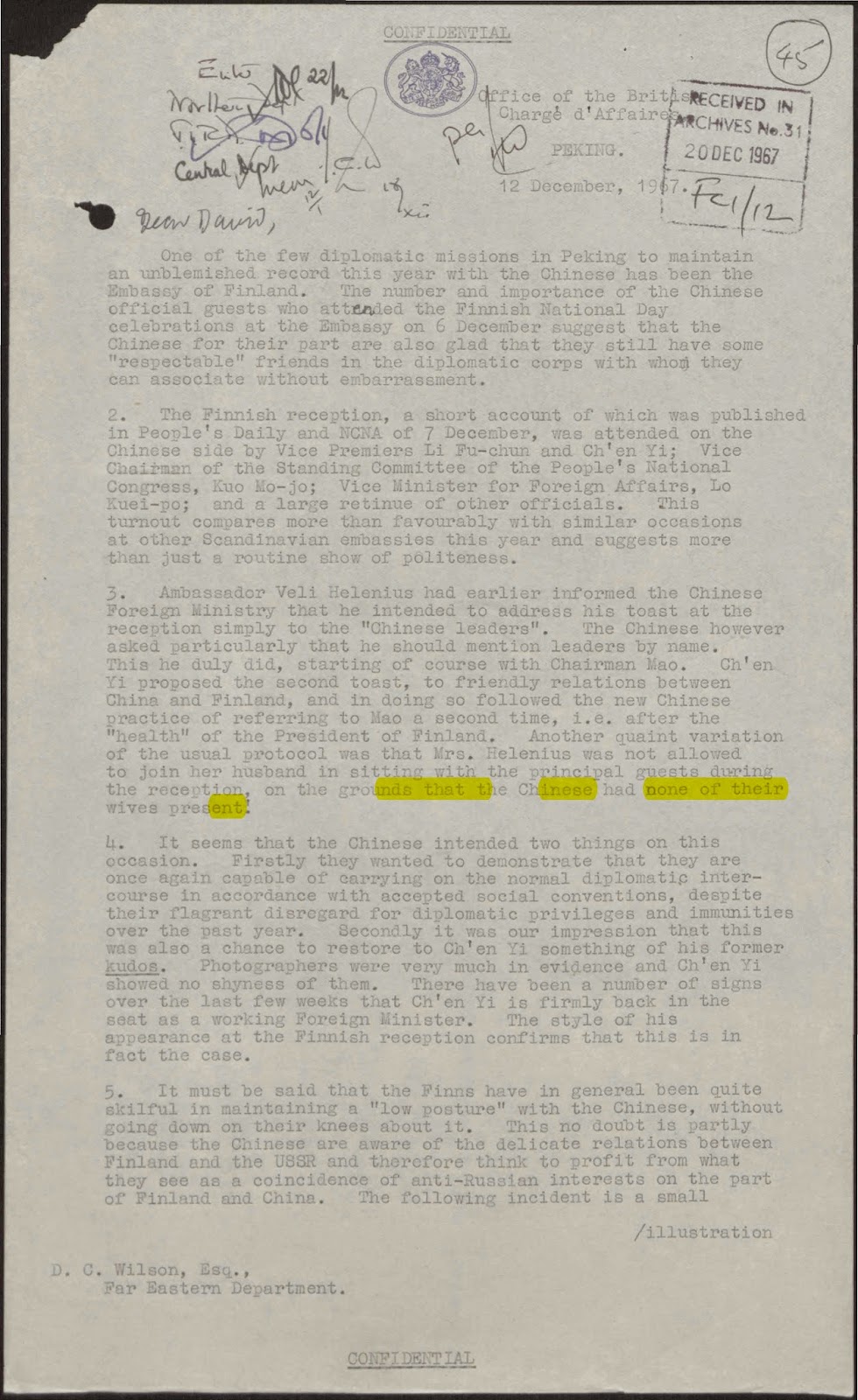 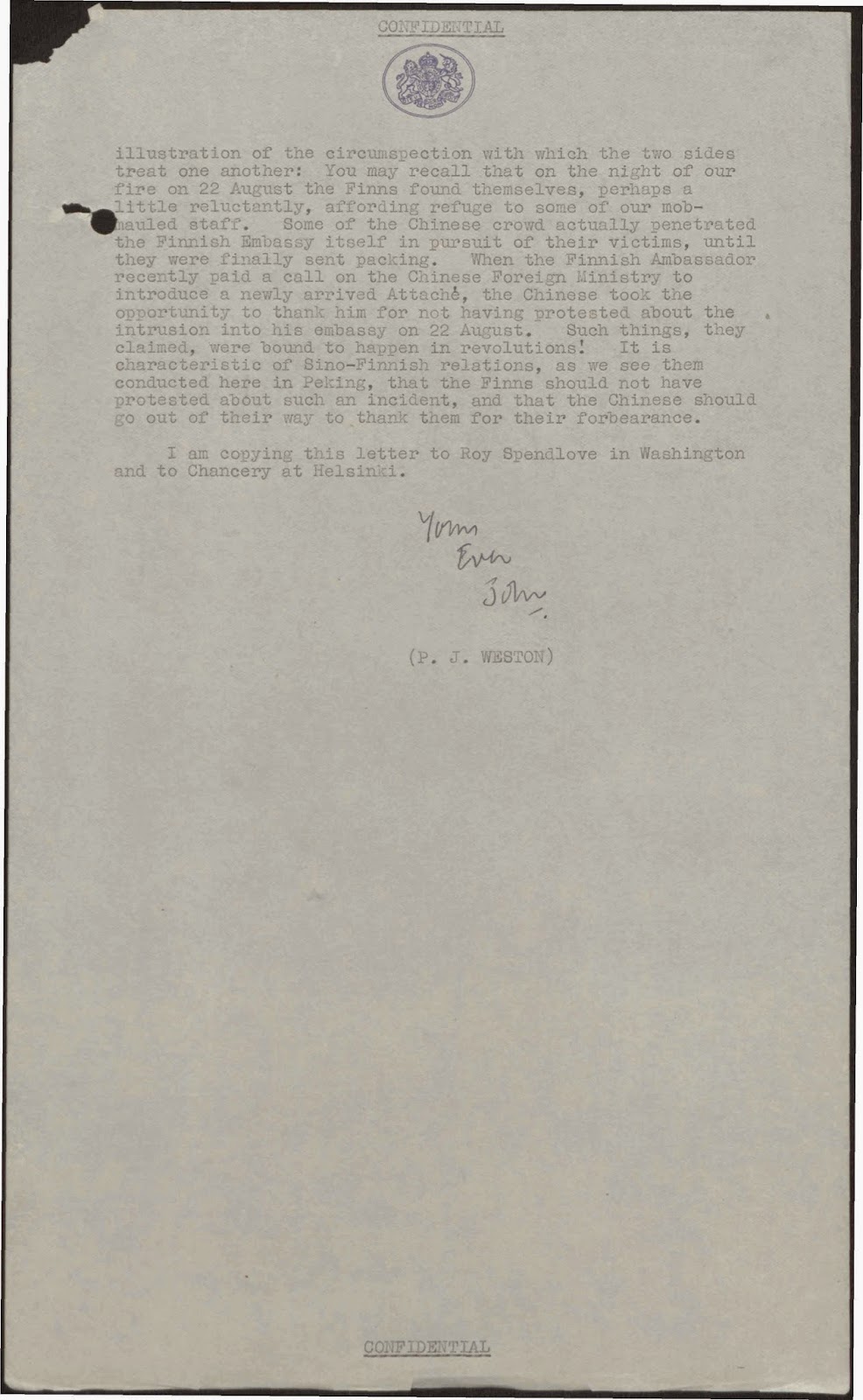